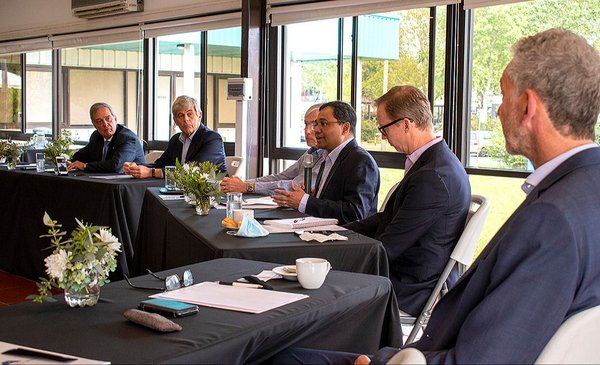 José Bonica, president of the National Institute for Agricultural Research (INIA), stated that “Uruguay showed the Bill and Melinda Gates Foundation that environmental sustainability can go hand in hand with economic and productive development”.

After accepting the invitation from the Ministry of Livestock, Agriculture and Fisheries (MGAP), experts from the Bill and Melinda Gates Foundation visited Uruguay to learn about the local agro-production modelits differentials and the actions that are being developed so that it is more sustainable every day.

As explained to The Observerduring three days the delegation had the opportunity to visit different places in the country where scientists and producers are working on the subject and to meet with official leaders.

Visit of representatives of the Gates Foundation to the INIA headquarters. Visit of representatives of the Gates Foundation to the experimental station La Estanzuela.

On the first day they were accompanied by the Minister of Livestock, Agriculture and Fisheries, Fernando Mattos; the president of INIA, José Bonica; the vice president, Walter Baethen, and the coordinator of sectoral technicians of the institute, Gonzalo Becoña, who in 2021 was appointed by the MGAP to attend the United Nations Conference on Climate Change on behalf of Uruguay for his specialization in the matter.

The itinerary began at the Hereford Breeders Society Test Center in Kiyúwhere INIA researcher Elly Navajas was in charge of presenting the research carried out there to identify, characterize and select the most efficient bulls and those that emit less methane.

Then they went to the experimental station of INIA La Estanzuela where the national director of the institute, Jorge Sawchik, invited them to tour the agricultural-livestock rotation experiment installed in 1963 to analyze the long-term consequences of different agricultural practices on the soil, the environment and the economy.

“The mission of the visit was that they could see, from different perspectives, that Uruguay has been working on environmental issues for a long time. It is not something that happens now, INIA has been researching for more than 60 years and the example is the rotation trial of La Estanzuela, which is the oldest in Latin America”, Bonica pointed out.

Because it is an open-air and grass-fed production that distinguishes Uruguay in the world, food, productivity, and sustainability go hand in hand, that is why the tour continued at the INIA dairy, with the director of the INIA Dairy Program, Santiago Fariña. The health focus of agro-production was added by Alejo Menchaca, coordinator of the Institute’s Animal Health Platform, who also visited.

The second day was marked by a visit to the establishment of the Leaniz Olegui family, in Florida. There they met a farm led by professional producers and highly trained collaborators, where winter production begins in an agricultural cycle to make possible the inclusion of improved pastures, and where there is also natural land.

“Uruguay showed that environmental sustainability can go hand in hand with economic and productive development,” said Bonica. “This foundation has a very important job in countries with conditions different from Uruguay, but our experience can be very useful for them to take full or partial advantage of it,” she said. Visit of representatives of the Gates Foundation to the experimental station La Estanzuela.

Finally, the third day took place at the Technological Laboratory of Uruguay, where INIA has its National Directorate. In addition to the highest authorities of the institute, three delegations attended the meeting, one from the MGAP led by Minister Mattos and Undersecretary Juan Ignacio Buffa, another from the Ministry of the Environment, and another from the National Meat Institute, led by its president, Conrado Ferber. . There, a total balance of the route was made and it was proposed to carry out joint actions in the future.

“It is clear that we are going to continue working together, that was agreed and committed. Although the foundation does not act in our country, it can provide us with assistance on certain issues, as well as the experience of Uruguay can be useful to apply in other places. It is a win-win situation,” Bonica stressed.

Likewise, the president of INIA valued that “it was possible to show how the institutional framework interacts to address issues of such relevance to the country and how research works closely with producers.”

“Uruguay showed that environmental sustainability can go hand in hand with economic and productive development, that was the central message,” he concluded.

Representatives of the Gates Foundation visited Uruguay: what they saw and what was explained to them