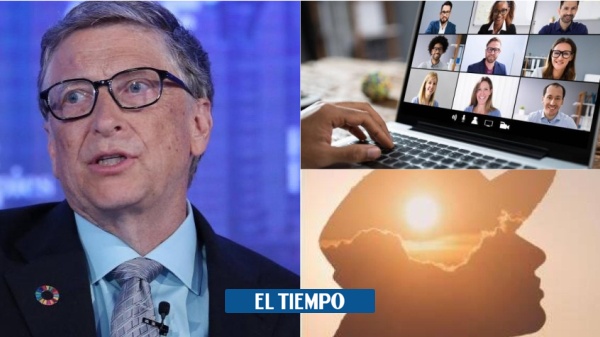 Three days and a handful of hours remain from 2021.

This year, even with a pandemic climate, highlighted by the processes of vaccination against covid-19 in almost all of the world. Thanks to this, there was a reactivation of the economic sectors hardest hit by the restrictions – starting with the field of entertainment and social gatherings – and a slight return to normality that was put aside since 2019.

This closing of the year is not the most hopeful as a result of the variant omicron. This new strain, initially detected in South Africa although with previous traces in other countries, forced the return of restrictive measures, flight cancellations and new confinements. Some countries in Europe, such as France, recorded contagion records that dusted off the most regrettable memories of the beginning of the global pandemic, in early 2020.

Maybe uncertainty is present in these moments of ‘curtain closing’ – the so-called fourth wave in Colombia is still ‘lurking’ with the increase in infections in Bogotá and other main cities of the country – but it is possible to keep hope intact and hope for the best looking forward to 2022.

At least that’s how Bill Gates thinks so.

(Read also: Eating habits that harm your health in your 60s, according to experts).

Bill Gates had a 2021 with personal problems and inconveniences, but he is optimistic for the following year.

On his popular blog, Bill Gates, creator of Microsoft and one of the richest people in the world, opened up about the balance of what was 2021 in a pandemic, a time that also brought his separation with Melinda French, with whom he was married since 1994.

He said that when he created one of the first computers rules governed by what is probably the most popular software in the world, I do not imagine that these devices became at this point in “the only connection of many with the world.”

“Like many people, there were whole days this year in which the only human interaction I had was through a screen (…) The result has been the most unusual and difficult year of my life”He added.

Gates emphasized that 2021 was the year of the ‘new normal‘given that, unlike 2020, a year in which there were at least a couple of months of tranquility, since January everything was adapted to the dynamics of confinement: remote work was consolidated, video-call meetings were much more common and the mask was the constant in the few public and private places that could be walked.

(You may be interested in: Championships, reigns and thrones: the great year of Rafael Dudamel and his family).

“After work, I would play bridge with friends online or hang out with them via video chat. Once I got vaccinated, I started having a few little in-person get-togethers, but my social life is still a lot more digital than it used to be.“Said the tech mogul.

He highlighted that, as it happened, probably the vast majority of people had this transit, even timid, towards the exterior world during vaccination and the ‘first steps’ of the general economic reactivation.

Bill did not overlook that “this year was a reminder that our world is more connected than ever. 2021 was full of monumental events with global repercussions, including extreme weather events “.

Vaccines were probably the invention of the year.

With this outlook, is it possible to have a ‘positive mindset’ by 2022?

Gates thinks so. And sustains it.

‘It’s inspiring to see groups working together to find solutions’

I believe that 2022 will be a year in which many of us finally settle into a new post-pandemic normal.

Gates said that social work It was an important part of this 2021. His foundation met every day, virtually, to discuss how to help with vaccines or in any aspect related to the pandemic.

“It is inspiring to see the groups working together to find solutions,” he said.

He highlighted that, beyond the covid, “(the foundation) is working with partners to help students and teachers navigate the strange new world of education in the era of the pandemic (…) my colleagues working on gender equality fight for a more equitable global recovery”.

Immunization processes in the world led to the reactivation of economic sectors and the gradual return to ‘normality’.

(We recommend: The ‘Encanto’ recipe to make Colombian fritters).

“One of the most exciting things that happened was lthe approval by the WHO of the first vaccine against malaria”, He wrote, highlighting that this disease kills“ more than 65 thousand people a year ”.

The environmental field not far behind: “I have been working on climate and energy issues for a long time, but the area has become a more important part of my focus during the last twelve months.”

In the midst of important reflections there was also time to broken heart: “Melinda and I continue to run our foundation together and have found a good rhythm of new work, but I cannot deny that it has been a year of great personal sadness for me.”.

The Gates family met in the marriage of Jenn, one of the daughters. There, Bill and Melinda were reunited, who had been separated for a couple of months.

What is expected in 2022? Gates knows that the pandemic will remain at the top of the world’s major agendas, yet he believes it will be the year of “last progress” to eradicate the covid-19 pandemic completely.

He stressed that advances in climate matters, precisely as a result of covid-19, will acquire a much higher priority, as well as technological advance in the world taking into account that devices, in times of pandemic, became the fundamental axis of companies, families and even physical and mental care.

Are we on the verge of a ‘new normal’? Gates believes that 2022 will consolidate dynamics that were taken as emergency measures since 2020.

(What’s more: Rigoberto Urán hires the fan who held his pace on the road).

“Human beings are naturally resistant to change. Whether it’s the massive global upheaval of the last two years or the transitions closer to home, it’s never easy to adapt to new ways of life. (…) I think 2022 will be a year in which many of us finally settle into a new normal after the pandemic, “he said.

“The world has adapted to big upheavals before and we will do it again”, He concluded.