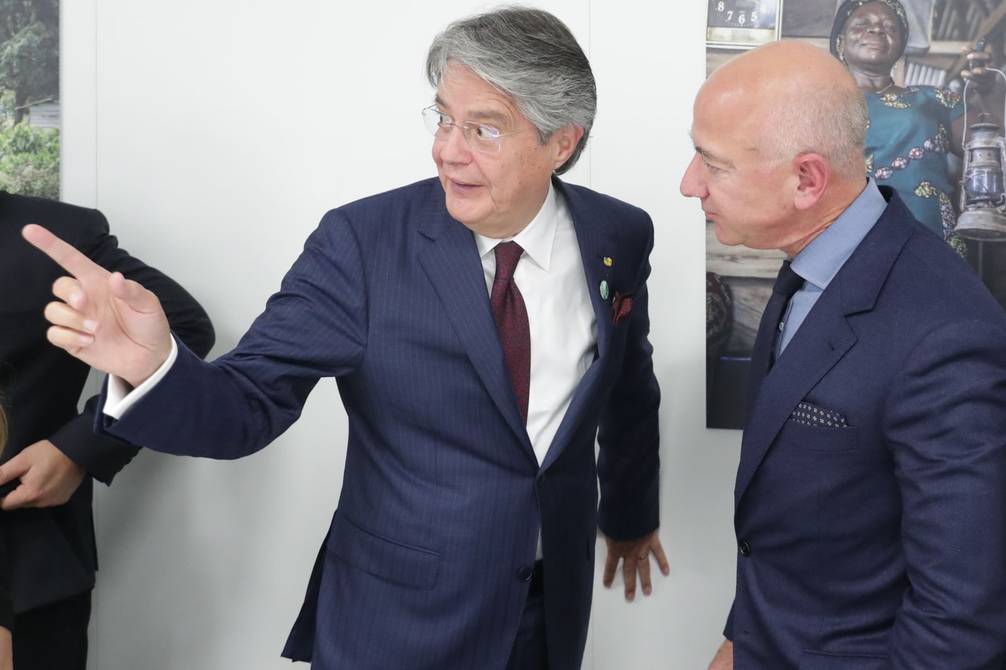 The president is scheduled to speak at the Conference this Tuesday, where he will present Ecuador’s progress in environmental protection

The president of the Republic, Guillermo Lasso, has taken advantage of his stay in Glaslow, Scotland, where he arrived last Sunday to participate in the United Nations Conference on Climate Change COP26, to meet with world leaders, not only with the intention of positioning his international policy of ‘More Ecuador in the world and more world in Ecuador’, in relation to strategies and actions that allow the conservation of marine areas and the protection of the environment, but also to attract possible investments to the country.

In this way, on Monday he shared with the main world leaders and authorities of Qatar, Argentina, Spain, Panama and Lithuaniaas well as with the German Chancellor Angela Merkel. Subsequently, he met with the renowned entrepreneur and founder of Amazon, Jeff Bezos.

On his Twitter account, President Lasso wrote: “We are very happy that Ecuador is seen as an attractive investment destination, which translates into reactivation and more employment for Ecuadorians.”

We had a pleasant meeting with @JeffBezos, founder of Amazon and globally recognized entrepreneur. We are very happy that Ecuador is seen as an attractive investment destination, which translates into reactivation and more employment for Ecuadorians. pic.twitter.com/vrR3CsWOBa

Regarding the environment, Lasso maintained a formal greeting with Lord Zac Goldsmith, UK Minister for the Pacific and Environment; and with Fiona Clouder, COP26 Ambassador for Latin America and the Caribbean, with whom they discussed the work of Ecuador in the matter of ecological transition through international cooperation.

While during the encounter with Sir David Attenborough, defender of nature, world eminence in environmental conservation and promoter of the protection of the archipelago, Ecuador’s commitment to protect the Galapagos Islands was reaffirmed.

Meanwhile, for this Tuesday from 04:00 -Ecuadorian time- President Lasso plans to present at the summit the initiatives that Ecuador is undertaking in terms of environmental protection and the fight against climate change,

After his intervention, Lasso, who already made important announcements on environmental matters on Monday, when he proclaimed the expansion of 60,000 square kilometers more of the Galapagos Islands marine reserve, will participate in the event Forests and Land Use (Forest and Land Use Event – FLU) called by UK Prime Minister Boris Johnson and in Build Back Better World – B3W (Building a Better World Initiative), with the presence of Jhonson, the US president, Joe Biden, and the President of the European Commission, Ursula von der Leyen.

COP26: Guillermo Lasso offers a new marine reserve in Galapagos in exchange for a debt swap

Then, the first president will participate in the signing of the Declaration for the conservation and management of ecosystems included in the marine corridor of the Eastern Tropical Pacific – Migravías Coco-Galapagos-Malepelo-Coiba and later will attend the presentation event of the ‘Global Commitment on Methane ‘. Later, he will hold meetings with potential investors and executives from Canning House, a think tank for Latin America and a strategic actor to foster relations between the United Kingdom and Latin America.

On environmental protection and investments, Guillermo Lasso discussed with world leaders and the founder of Amazon, Jeff Bezos, at COP26 | Politics | News