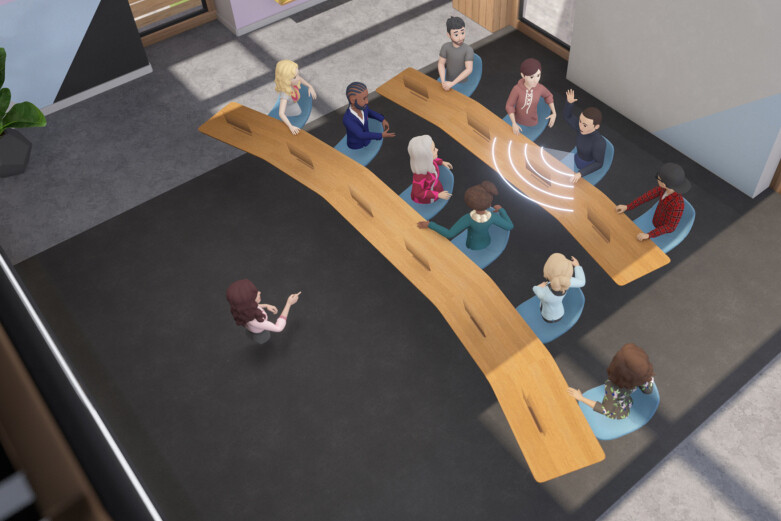 It is the next great frontier of the digital world and Marck Zuckerberg, the CEO of Facebook, seems obsessed with it. The metaverse, that concept taken from science fiction –Snowcrash, Neal Stephenson-, each time it monopolizes more headlines and concentrates more investment from large companies such as Facebook itself, Nvidia or Microsoft, but Do we know what it is exactly?

The metaverse is a virtual universe that expands the physical world into digital. It looks like video games and has some of its elements and aesthetics, but this replica of reality is not intended to be played, or not only for it, but to reproduce many of the social dynamics of our day to day, from working to going to concerts or shopping.

One of the keys to the metaverse is virtual reality. That is to say, this new digital world has to be immersive, it must allow its users to interact with it as they do with the real world, for which the use of VR devices will be essential.

Another fundamental aspect is interoperability, since it will be made up of different platforms and Ideally, they should be interconnected so that we can move freely from one to the other.. And not only that, the metaverse also has to allow users to maintain the appearance of their avatars in any of their worlds, as well as use the digital objects they have acquired.

In addition, beyond the social and labor section, the metaverse is also conceived as a large-scale industrial workspace, in which they can do testing of all types of machines and systems using digital twins before putting them to work in the real world. In such a way that possible failures and improvements are detected before executing its physical construction.

Definitely, the metaverse is a replica of the real world in virtual, with which you can interact just as we do with spaces, objects and physical people thanks to virtual reality, and that will be used for multiple activities, from entertainment to industrial development. Likewise, it will not be a platform dominated by one or more companies, but rather a sum of interconnected spaces, such as the internet we now know, through which we can move at will and to which new universes can join without limit.

The enormous possibilities offered by the metaverse and, above all, the opportunities to monetize them, have aroused the interest of big technology. And it is that, according to Bloomberg, this virtual universe could mean a global business of 800,000 million dollars by 2024.

The company that has shown the most interest in the metaverse, at least publicly, has been Facebook through its CEO, Mark Zuckerberg, who even stated in a recent interview with The Verge that in the next five years they will go from being a social media company to a metaverse company.

And he was not bluffing, since only a few weeks after those statements Facebook presented Horizon Workrooms, a virtual reality platform for teleworking that constitutes your first approach to the metaverse. This workspace is designed to be used with the Oculus Quest 2 glasses and allows you to reproduce multiple aspects of a physical office: create a virtual desktop, attend meetings with spatial sound, leave digital documents on the table, etc.

Nvidia, for its part, is working on a meta-reverse platform with, in principle, industrial purposes. In April, its CEO, Jensen Huang, said they wanted to create a replica of the virtual world to test different tools and devices using digital twins before building them. And in fact, they have already ** reached an agreement with BMW to create an exact digital copy of the German factory in Regensburg **.

However, the greatest approaches to the metaverse to date have occurred in online multiplayer video games such as Roblox or Fortnite. In the second, widely known, mass concerts have already been held and there are other elements that characterize the metaverse, such as the purchase of digital objects such as weapons or clothing, which has brought them huge benefits. In fact, Its own creators have recently affirmed that it is no longer just a video game, but a social meeting place.

Roblox, meanwhile, is a platform where users can explore, collect resources, create and buy objects, construct buildings, create mini-games, and fight. Over time it has also become a place where you can go to events such as concerts or art exhibitions, some of them for a fee, and hold business meetings. And there are even those who have created strip clubs and sex parties, although in principle this type of content is not allowed.

Fortnite does not currently offer the possibility of having an immersive experience on its platform through virtual reality, although it is a possibility that they have been studying for some time. Roblox yes, through the Oculus Rift glasses or the HTC Vive.

The metaverse, in the near future

Despite all these approaches and the virtual reality teleworking platform recently launched by Facebook, andThe metaverse as such is not yet a reality. It takes years of development and solving some important problems, such as creating VR devices that are lightweight and more comfortable than the current glasses on the market, still large, somewhat heavy and bulky.

The different parties involved in the development of this next technological frontier also warn that their implantation will not be radical, but gradual, so they will be introduced little by little platforms, elements and interconnections until, in the not too distant future, one can speak of a metaverse as such.

What those who are the strongest betting on this digital universe are sure of that is that it will arrive and will have as wide a diffusion as that of the first internet. Zuckerberg, in the interview with The Verge, pointed out that the great attraction of the metaverse is that it will allow people to interact again as they have always done in a physical environment, because human beings are not conceived to relate to the world through the grids of digital devices.