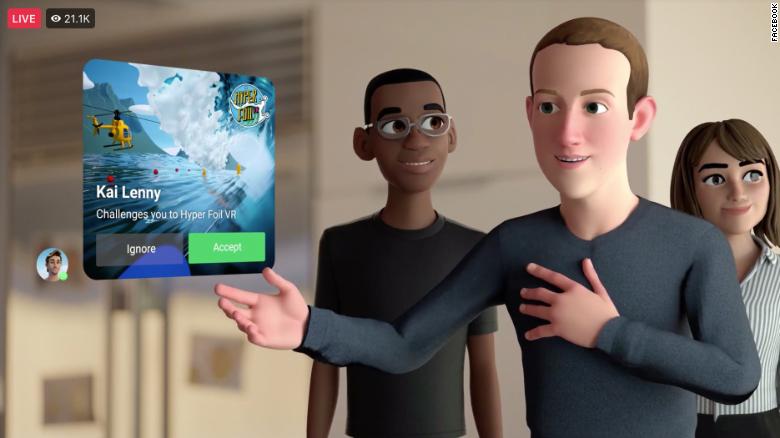 (CNN Español) — This year we said goodbye to Facebook Inc. to welcome Meta and the “next chapter for the Internet”, in the words of its CEO, Mark Zuckerberg who presented the next social platform: the metaverse.

“The next platform will be even more immersive: an embedded internet where you are in the experience, not just looking at it. We call this the metaverse and it will affect every product we build.” wrote Zuckerberg.

According to the CEO of Meta, the sense of presence within the metaverse will be the “defining quality”, since ideally, the metaverse could be done “almost anything you can imagine”, such as meeting with friends and family, working, playing, buy and create.

Months before Meta’s announcement, Matthew Ball, a venture capitalist and one of the “metaverse’s most sophisticated thinkers,” according to Zuckerberg, wrote in one of his many essays that the metaverse is not something that will just come into being.

“There will be no ‘Before the Metaverse’ and ‘After the Metaverse’. Instead it will emerge slowly over time as different products, services and capabilities integrate and work.” And for this to happen, new ones will have to be developed. technologies, protocols and innovation, and that is already happening.

The clearest example is Horizon Worlds, a first installment of Zuckerberg’s vision of the metaverse. “On a cold December afternoon, I played an exciting game of laser tag, flew around town on a magic broom, killed zombies in an abandoned shopping mall, and dated an old friend who lives roughly 2,000 miles (more than 3,000 kilometers) away. away, all without leaving my house, in fact, my living room “, wrote CNN’s Rachel Metz about his first experience in the virtual world of Meta.

After spending days in Horizon Worlds, Metz indicated that Meta’s virtual universe is still far from being the experience that the company sold us during Facebook Connect. And is that although Meta put the metaverse in the headlines, the virtual world where many aspects of the physical world can be connected to the digital world does not exist, yet.

In his essay entitled “The metaverse: what it is, where to find it, who will build it“, Bell pointed to Microsoft as the possible” main driver of the virtualized future.

Unlike other giants in the technology industry, Microsoft currently has hundreds of millions of federated identities – a method that links a user’s identity across multiple systems allowing them to move quickly – and is the second largest provider of cloud services, after amazon. Not to mention that Microsoft has the software and hardware to bring the metaverse to life.

“But most importantly, CEO Satya Nadella understands that Microsoft, at a minimum, must be where the work is done,” said Ball, who highlights how the company has been able to successfully adapt to the requirements of the consumer moment with a dominant role in the workplace.

However, Microsoft put its stamp on the metaverse and presented a version much more modest than Meta, but also much more real: Mesh. So instead of offering users to learn new surgical techniques through a virtual operating room or participate in a battle of laser tag, the company led by Satya Nadella focused on solving, or rather, improving labor productivity.

Thus, by creating “digital twins” —which, like Meta, come without legs— Mesh users will be able to meet and share digital spaces to work in a way, and why not, socialize. Unlike a totally digital world, Microsoft is committed to a mixed realization.

“As a company that focuses on productivity, on knowledge workers, it is something that customers are really asking of us and it combines with the vision of mixed reality that we have been working on for 12 years. Everything is coming together.” said Alex Kipman, Microsoft technical member during Microsoft Ignite

Access to Mesh for Teams, having a pair of virtual reality glasses (VR) is not a requirement, since it is accessible from smartphones and computers.

“Fortnite” and the metaverse

A third name in this race to the metaverse is Epic Games, the company that developed “Fortnite,” which in April 2021 he announced a financing round of US $ 1 billion for the development of its metaverse, an investment that “will help accelerate our work around the creation of connected social experiences in ‘Fortnite’, ‘Rocket League’ and ‘Fall Guys’.

Along these lines, it is that recently Epic Games introduced the new experiences of Party Worlds to “Fortnite,” which are designed for players to “hang out, play fun minigames, and make new friends.”

“The great advantage of ‘Fortnite’ is not that it was built to be the metaverse, but that it is already a massive social square that is gradually taking on the qualities of one,” Bell wrote in his first essay on the metaverse. The massive reach of “Fortnite”, along with its cross-platform ability and ability to monetize, are key advantages that will help Epic Games in this race to the metaverse.

Similarly, Bell highlights Marshmello’s live concert within “Fortnite” as a demonstration of his potential in the metaverse “where a user can have potentially unlimited experiences within a single medium.”

And it is difficult not to find similarities between today’s “Fortnite” with the futuristic concept of the metaverse illustrated in films like “Free Guy” or “Ready Player One” by Steven Spielberg, where users enter the virtual reality universe and They find in him everything they could want in real life.

Although access to the first versions of the metaverse is free and accessible via common electronic devices, such as computers or smartphones, the reality is that the metaverse is designed to be experienced through a virtual reality device, such as the Oculust Quest 2, Sony Playstation VR, HTC Vive or HoloLens 2.

The price of this type of gadgets It ranges from $ 299 for the Oculus Quest 2 set to $ 3,500 for Microsoft’s HoloLens 2; so virtual reality continues to be a niche technology. However, increasing competition and future focus on the metaverse could change the landscape for this type of technology.

In accordance with eMarketer, “VR equipment is poised to enter a new phase of competitiveness” so revenue from VR consumers around the world is expected to grow from $ 3.5 billion this year to $ 5.7 billion by 2023 .

However, even without a VR device, the metaverse needs an internet connection to function, and there are currently 3.7 billion people who still don’t have regular internet access, according to the United Nations Broadband Commission.

In addition to the technological barriers to accessing the metaverse, there are major concerns about social inequality, privacy, and data security.

“I don’t want to see a world where we segregate people into those who can afford a better experience and those who can’t,” Avi Bar-Zeev, founder of virtual reality and augmented reality consultancy RealityPrime and former employee of Apple, Amazon and Microsoft, where he worked on HoloLens.

He added that online harassment could become more intense when users are able to assault each other’s virtual bodies, rather than simply exchanging unpleasant words on a screen.

Furthermore, the metaverse could also become a threat to our privacy when “more of our lives, our data, our work, our investments now exist in purely virtual form,” Ball said. And other issues, like misinformation and radicalization, could also get worse in the metaverse.

Although the metaverse is listed to be one of the industry trends in 2022, its existence – as it has been presented to us in demos and in fiction movies — possibly years away.

With information from Clare Duffy of CNN.

Metaverse: 2021 opened the door to many possibilities