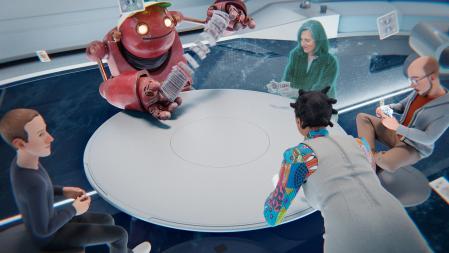 Meta Platforms plans to launch at least four new different models of virtual reality (VR) headsets before 2024, according to the US media. Information, who has agreed to the roadmap set by Mark Zuckerberg to conquer the metaverse. One of them is the already announced Project Cambria, an improved version of the current Quest 2. The leaks describe Project Cambria as “a laptop for the face” aimed at professional use.

Meta planned to present Project Cambria in 2021, the code name for the helmet that combines virtual and mixed reality. But problems with the supply chain caused by the pandemic have postponed the launch until next September 2022, according to the same sources. The other three VR headsets would hit the market before 2024, when Mark Zuckerberg’s company expects the metaverse to begin expanding.

The first augmented reality glasses, by 2024

A second version of the Cambria, codenamed Funston, will hit the market in 2024. In addition, the leaked roadmap suggests that Meta plans to launch two new Oculus headsets in 2023 and 2024, the year in which it will also market its first glasses. of augmented reality (AR).

Cambria is described internally at the company as a “laptop for the face” or a Chromebook for the face. Additionally, it will use Meta’s proprietary virtual reality operating system, which is based on Android.

In this regard, Cambria is expected to be compatible with online tools and services, as well as some Quest applications. It will also incorporate a high resolution of image quality, to reinforce its commitment to the professional use of the device, according to the technological publication Engadget.

They will cost 800 dollars (about 760 euros), more than double that of the current Oculus Quest 2

Mixed reality, which combines virtual and augmented reality to create spaces in which to interact with both real and virtual objects and people, will also be present at Cambria. To do this, the helmet will incorporate outward-facing cameras, according to the aforementioned medium.

The document states that Cambria will enjoy greater autonomy than the Oculus Quest 2 by having a larger battery that, for reasons of balance, will be integrated into the rear of the device.

As Meta announced in October 2021, Cambria will allow avatars to reproduce eye contact and expressions in real time thanks to the sensors it integrates. The launch price of Cambria will be 799 dollars (760.50 euros at current exchange rates), a figure higher than the 349 euros currently costing the company’s Quest 2.

Meta will launch its virtual reality helmet in September: “It will be like carrying a laptop on your head”