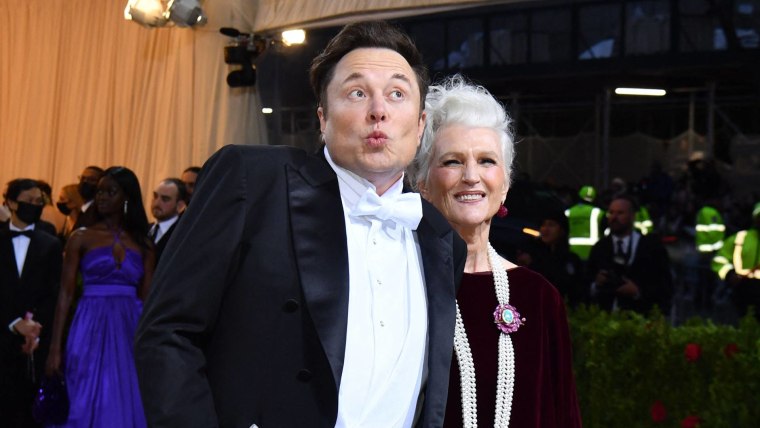 May Musk gave an interview to ‘E! News’ during the Fashion Media Awards where she commented that she has a very close bond with her son Elon Musk51, who was barely known to have secretly had twins with an employee of one of his companies.

“He is very sweet, kind and attentive,” he said at the event that took place on September 10, and when asked what could surprise people about him, he commented: “I wish he was here tonight, but he went to Morocco ”.

A few weeks ago Maye, 74, revealed where she rested when she went to Elon’s house, “I have to sleep in the garage. You can’t have a fancy house near a rocket launch site,” she told the Times.

In addition, he commented that his son did not care about material positions and said that despite the fact that he is now among the richest men on the planet: “Nothing changes. My children are still kind and loving. I still appreciate being here. When I first came to Paris at the age of 21, I had only $5 a day. I stayed in a room with a single bulb hanging.

The businessman’s mother also told ‘E! News’ that it was never too late to pursue her dreams. Maye, who was honored with the Breakthrough Model Award, started modeling at the age of 15 and by the time she was 18 she had already become a favorite of magazine and catwalk models, landing on the cover of ‘Women’s Day’ issues. and ‘Sports Illustrated Swimsuit Issue’ among others.

In addition, she said that her rise to fame as a dietitian and model left her in shock, as it has been celebrated by many women, “I never expected that to happen, because, as a dietitian, I would help people eat well so that they could have a better health”,

“Now it seems like with modeling and then with my book, that has been done so well, that women relate to wrestling and then they have to keep working on their goals to be successful,” she added.

Maye also said what her motto was for pursuing her goals in life, “My mantra is that you have to enjoy what you’re doing. Personal life and business life,” and she added, “What if you don’t? You change it. It’s scary to change, you don’t know what’s going to happen. But you can’t live in misery all your life.”

MORE TO SEE: How will Melinda and Bill Gates split an estimated $130 billion fortune?

Maye Musk spoke about the personality of her son Elon Musk