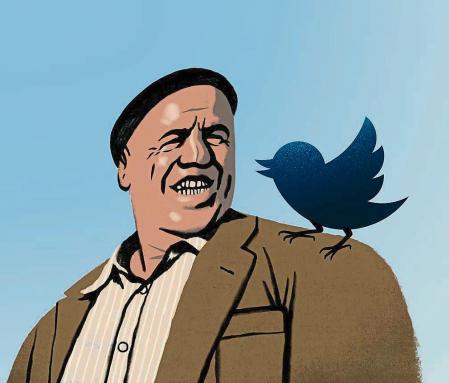 A millionaire from before to demonstrate his power bought a yacht. Or a Jaguar. Or seven Rolexes. Or a castle. Or some vineyards to grow his own wine. Now to demonstrate power and squander money that can never be spent in life, a multimillionaire mounts a tourist trip to the Moon, like someone who goes to Cunit for the weekend. Or he buys Twitter for $44 billion for nothing.

I don’t know if what Elon Musk has done with Twitter is good or bad. Can’t he do with his money what he wants? Can’t a multimillionaire buy a social network like someone who is infatuated with a Thermomix? Didn’t Jeff Bezos buy himself Washington Post ? Are we discussing freedom of expression? Has anything changed so that we stop thinking that since the printing press was invented, freedom of the press is the will of the owner of the printing press? Has anything changed since that verse by the poet Rodrigo Rato “It’s the market, friends”?

What is most surprising is the exhibitionism with which these macro-purchase operations are carried out. Before, the rich preferred to do business in reserved restaurants. Now Musk advertises him as a youtuber, as if he were doing a Twitch direct, and his acquisition feat is admired by the kids, who enjoy the bravado of the intrepid businessman who started from scratch.

The world is being left in the hands of four landowners for whom we will all end up working: Mr. Amazon, Mr. Tesla, Mr. Windows, Miss Zara or Mr. Facebook. The pity is that we will not have an actor like Juan Diego to interpret them. Nor will there be a Delibes to describe them. They will take care of it. They are the fucking masters of the printing press.

If Musk does not take care of the Twitter bird, the people, who allow everything, can be angry

In these unrevolutionary times, the accumulation of wealth, and the despotism with which it is displayed, even provokes admiration. But also anger and rejection. For this reason, in the eighties, the audience at the Pisa cinema in Cornellà applauded furiously when Azarías killed master Iván, in The Holy Innocents. Juan Diego made a raw, wild portrait of the gentleman of post-war Spain. Alfredo Landa nailed the submissive peasant. And Paco Rabal, the intellectually disabled (let’s not abandon political correctness), the one who ends up best exercising, without intending to, the class struggle.

The applause from the audience at Pisa, and from many other cinemas, sounded like revenge. That of thousands of immigrants who abandoned their towns, fed up with the miserable living conditions, fed up with the hunger, the poverty, the alms with which the gentlemen paid their wages. Do not think that the conditions offered today by landowners, both those in the countryside and those in the city, are much better. But there are still political parties that vote against raising the minimum wage. The same ones that claim in the 21st century the Spain of the gentleman on horseback, the Spain of the cigar, brandy and the Dandy Man.

Azarias did not kill Señorito Iván for ideological reasons, nor because of how he humiliated his brother-in-law Paco, whom he used as a hunting dog so that he would go looking for partridges, sniffing the ground on all fours. No. Azarias’s head wasn’t up to that. Azarias only kills because Señorito Iván has killed his pretty Milana, his passion, his amusement.

I don’t know why Master Elon needed to buy the Twitter bluebird. But you should take care of it. If something happens to him, if he doesn’t take care of the bird, the town that allows him everything can get angry. That bird is the beautiful Kite of many.

Master Elon and the pretty Milana, by Jordi Évole