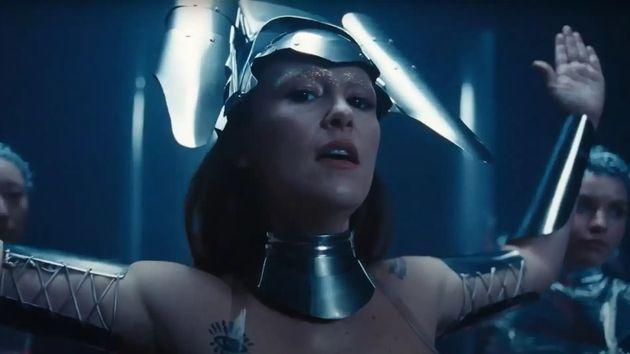 There was no more appropriate day than Mother’s Day for Rigoberta Bandini to premiere the video clip of your theme Ow mom. The Catalan, who was one of the favorites to win the Benidorm Fest, has made her song a hymn to motherhood and the liberation of female breasts.

The success achieved by Bandini – which he achieved in Spotify almost 8 million plays barely a week after the festival—has been repeated with the clip of the theme, which has been described as a “work of art” by many followers.

In it there are winks and references of all kinds, from the breasts of women in art history —and not only with Delacroix’s painting—, to the family itself and Bandini’s references to the censorship of breasts on social networks. Here are some of them:

The family circle and their personal references

Paula Ribó begins the video clip sitting on the floor composing the song in a room next to the one where her son sleeps. When she begins the topic, from a zenithal plane you can see the images and illustrations that it includes. Among them is a photo of her mother, smoking just like her. Looking at her, as a dedication, the song begins.

However, on a broader level, other references can be seen. Art historian Clara González highlights a Twitter thread that includes an illustration of the Hindu goddess Durga, who is depicted on a feline as the “mother goddess of the universe.”

It also includes the card of The Empress of the Tarot of Marseilles, which included as the cover of the single at the time of its release. González also highlights an image of the painting Bathsheba with David’s letterby Rembrandt, in which, in addition to showing female breasts, some symptoms of what could be breast cancer were captured.

After this, a dome opens with numerous female paintings with breasts ranging from Julio Romero de Torres and various representations of The Virgin of the Milk. All illuminated by a light as a symbol of the origin of the world that recalls the opening of the Pantheon of Agrippa.

From prehistory to the representation of virginity

From there she moves on to a more futuristic and dystopian vision dominated by white —the color of strength and virginity— in which she and her dancers dress in white robes that metaphorize the hymen, a representation that is also made in one of video transition frames, as indicated by González.

The power of sexuality based on laser beam

After showing several mothers with their babies, Rigoberta and the dancers turn into some kind of android with laser boobs reminiscent of Aphrodite, Mazinger Z’s girlfriend.

A laser that shoots out from Bandini’s crotch becomes the classic feminist icon of the vulva depicted with two clasped hands.

Still from the video clip of ‘Ay, mama’ by Rigoberta Bandini. (Photo: YouTube)

That tunnel, like a kind of journey from the sperm to the egg, ends with Rigoberta floating in CGI as the germ of life. From there she goes to the opening scene, as if it had all been a dream and she was still composing in the studio.

As a final climax, a giant tit, similar to the one presented at the Benidorm Fest, destroys a sphinx with the face of Mark Zuckerberg and the Meta symbol with a laser as a metaphor for the censorship of the female nipple in this social network.

This article originally appeared on The Huff Post and has been updated.