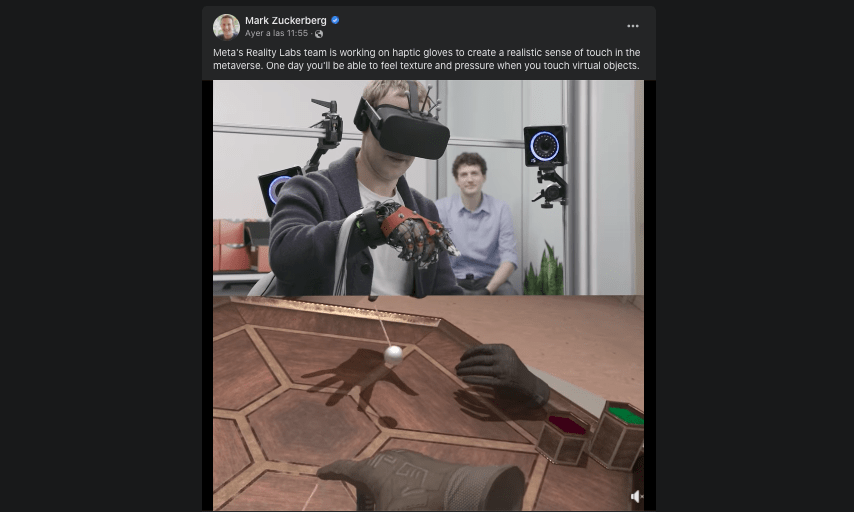 Mark Zuckerberg has uploaded a video to his social network using the gloves to feel textures within the Metaverso.

Facebook, now called Meta, is currently one of the most powerful digital companies today, since in addition to having the social network of FacebookIt also has some other companies within its ranks, such as Instagram, WhatsApp, Oculus, Giphy, among others. According to the ranking shown by Statista on the 20 leading technology companies in the world during 2020 by brand value, Facebook is in fifth position with 147.190 billion dollars, below Apple with 352.217 billion, Microsoft with 326.554 million, Google with 323,601 million and Tencent with 150,978 million.

Facebook achieved its success over the years, carrying out the necessary marketing and alliance strategies to be able to prevail in the consumer’s mind and consequently, continue to innovate.

For a few weeks, Mark Zuckerberg had announced the arrival of Meta and the Metaverso, presenting us with a new “universe” of reality virtual, where he was in charge of showing a “new life”, which could be used to have new sports, entertainment and even learning experiences, all from the comfort of our home with the use of some of his products, as they can be the glasses Oculus.

To complement the Metaverse virtual experience, those in charge of this project have bigger plans than the use of glasses that allow us to enter a world virtual, since they are now working on some gloves with state-of-the-art technology that will allow users to feel textures, allowing users to feel both digital and physical objects, such as surfaces, objects, edges, smoothness and even vibrations.

Mark Zuckerberg has shared through his Facebook account a video where he is seen testing the pair of gloves with which supposedly you can feel textures within the Metaverso, achieving endless reactions from users, being a good publicity for the brand.

In the video we can see the businessman from Meta, Mark Zuckerberg, tell your experience using the metaverse gloves, where he seems to be excited about the connections he feels with the other user with whom he is interacting, especially in a handshake.

This product would add to the constant attempts of the company to provoke new areas of consumption within the digital world, which would change the future (for those who adopt them) of offices, sports centers, education and other types of activities that the Metaverso pretends to hoard; However, all these changes will not happen overnight, but will take the company years of work, which does not sound so unattainable if we take into account their extensive advances that have been achieved 17 years after the creation of Facebook.

Different companies have been interested in continuing to innovate in terms of marketing strategies; taking into account the wide opportunities that Meta are looking to carry out, this could represent a new advertising opportunity to brands with a type of virtual experiential marketing.

Technology has been a good ally in recent years to create bells disruptivas, which have been appealing to consumers, in addition to being efficient. An example of this we had previously with the YSL Beauty campaign, who illuminated different monuments in Mexico City with the help of technology; In the same way, we also previously saw Cerveza Victoria who revived Juan Gabriel on the day of the dead thanks to technology.

Technology increasingly shows more advances and gives brands and agencies new opportunities to carry out different marketing and advertising campaigns that will be a trend in the future.

Mark Zuckerberg tests gloves to feel textures in the Metaverse