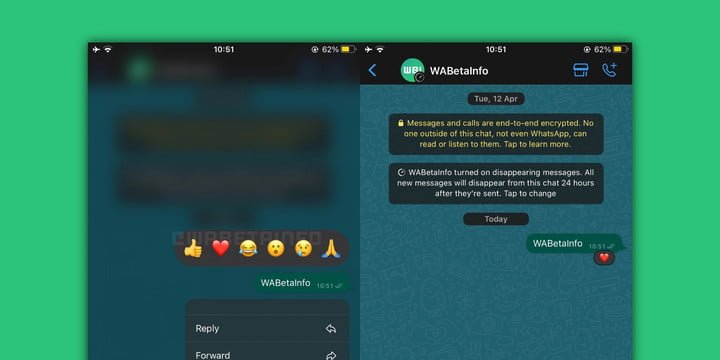 Officially, emojis arrive on WhatsApp and it was Mark Zuckerberg himself, CEO of Meta, who confirmed what had been rumored for weeks.

It was not long ago that, in some specialized media, the rumor was released that WhatsApp, the most popular instant messaging app on the planet, had in mind to incorporate emojis to its platform.

Even last April, some images were revealed of what emojis or reactions would look like on WhatsApp, one of the functions that, apparently, is one of the most anticipated by users, but let’s go by parts.

Currently, WhatsApp is the most popular instant messaging social network in the world, with its more than two billion users worldwide, according to data from Statiasta. This figure even places it well above other social networks such as Facebook Messenger (also from Meta), WeChat, Skype and Telegram, the latter being the one that has begun to gain the most ground, although not at the level of the application of Goal.

In this way, with the inclusion of emojis in its messages, WhatsApp continues to seek to reach new users and, incidentally, offer a different experience to those that it already has in its pocket and that, as has happened, can change. social network at any time.

Recall that last year, after the Meta apps blackout, several users unsubscribed from WhatsApp and moved to Telegram, which gained around 70 million new users at the time.

So, for this reason, WhatsApp’s bet is the emojis, which, officially, have been announced by Mark Zuckerberg himself, although, for now, only six different reactions or emojis are available: Thumbs up, Heart , Laughter, Surprise face, Sad face and Palms together.

A few weeks ago, WaBETAinfo published a couple of images showing what emoji reactions will look like on WhatsAppa function that could soon reach all users of the platform.

It is not only WhatsApp, but recently YouTube also announced its intentions to incorporate reactions on its platform, although, as expressed by the company, emojis on YouTube will appear at very specific moments in videoswhich is why this new function is called “Timed Reactions” and, in fact, may be anonymous.

And it is that, in short, the arrival of these emoticons changed the way in which Internet users communicate, becoming something more than a function to decorate social networks; now they are presented as a new way to measure the effectiveness of communication between users, especially when in times when brands and content creators have become highly relevant.

Telegram knows this very well, the platform that in October of last year Telegram launched a new line of interactive emojis with which, as mentioned in a releaseseeks for people to better express their emotions.