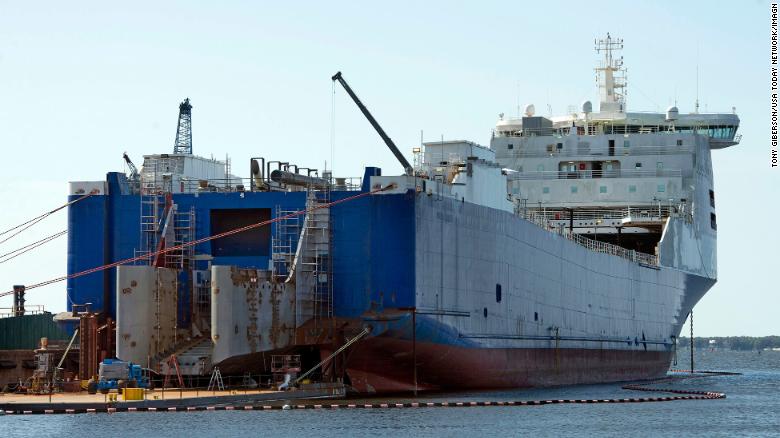 New York (CNN Business) — Jeff Bezos, the billionaire founder of Amazon and the Blue Origin rocket company, made a big public announcement a year ago that he bought a ship to capture Blue Origin rockets after they returned from space, naming it after his mother. But now the company says it won’t go ahead with that plan and will look for a more “cost-effective” alternative, according to Blue Origin spokeswoman Linda Mills.

It’s unclear what will happen to the Jacklyn, the ship that Bezos dedicated to his mother in a small ceremony in Pensacola, Florida, in December 2020. Blue Origin could still use the ship for another purpose or abandon the project altogether. Mills said the company is “still evaluating options.”

The Jacklyn was undergoing overhaul and maintenance in the Port of Pensacola. The ship is seen here on Tuesday, April 19, 2022.

Blue Origin wanted to sail the Jacklyn out to the Atlantic Ocean to pick up their New Glenn rockets. When the large first-stage booster that provides the initial thrust at liftoff spends most of its fuel, it’s designed to detach from the rocket’s upper stage and make a controlled landing on Earth, just like SpaceX does with its Falcon 9 rockets.

Blue Origin’s website continues to refer to landing its rockets on a ship, rather than a barge, touting that this allows the booster to land in turbulent ocean conditions. In theory, a huge ship could remain stable in rough waters, allowing Blue Origin to carry out its rocket recovery operations in all kinds of weather conditions.

But that plan would have required the Jacklyn, a old cargo ship built in 2004, it underwent extensive adaptation, including the installation of a huge platform for the rocket to target. Mills declined to say how much the renovations would have cost.

Landing rocket boosters rather than disposing of them in the ocean, as other rocket companies have done for decades, is at the core of SpaceX and Blue Origin’s plans to lower the cost of launches and ensure profitability.

Blue Origin’s New Glenn rocket is slated to be the first of the company’s rockets capable of reaching orbit, a journey that requires speeds in excess of 17,000 miles per hour. SpaceX has sent rockets into orbit since 2008.

So far, Blue Origin has only flown flights of its much smaller New Shepard suborbital rocket. That rocket has been used to transport paying customersand last summer, Bezos himself, in brief supersonic rides that reach the edge of what is technically considered space.

The New Glenn is not planned to carry humans, at least not initially, but will carry satellites and other cargo into orbit.

Although already a couple of years behind its original schedule, Blue Origin expects to launch the first New Glenn into orbit in late 2022.

Jeff Bezos’ ship, named after his mother, will no longer be used to catch Blue Origin rockets