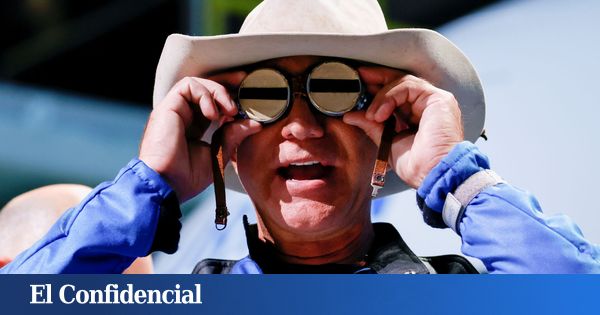 Jeff Bezos, the billionaire digital grocer turned space cowboy, recently participated in some talks in which he shared his predictions about the future of humanity. According to Bezos, in a few years our civilization will move into space and there, thanks to him and his company Blue Origin, we will be able to work or educate our children.

This intervention took place at an event organized by the Paul and Nancy Ignatius Program at the National Cathedral in Washington called “Our future in space.” His interview can be seen in its entirety in the video under these lines.

Industrial activity will take place outside the Earth

“This planet is so small that if we want to continue growing as a civilization, using more energy as a civilization, a lot of that in the future will have to be done off-planet,” says Bezos. The energy use of our society has been growing continuously in our recent history and, according to him, it will continue to do so at a rate of 3% per year. So if we want to maintain that rhythm and that it can be enjoyed by the next generations, we will have to build power plants in space in order to bring it to Earth, although most of that energy, he maintains, will end up being consumed in space itself.

“You have to leave the Earth to protect the Earth”says Bezos. “The goal of Blue Origin is to create the roads into space for the next generations to build life in space.”

Millions of people will move into space

Bezos thinks that our civilization is currently at a crossroads and the only way to preserve the Earth as we know it is to leave. “We have already lost so many forests, so many rivers … We have to restore our nature,” he says.

The billionaire believes that the world population will continue to grow and our planet will not be able to support more than 10 billion people, however in space, according to him, there are no squeezes. For Bezos: “The solar system can support a billion people.” In addition, humanity will change. “Most or many of the inhabitants will be born in space. It will be their first home ”. There they will be born, live and develop their professions. Let’s hope that in your plan it is not that the next generations of workers also have to urinate in a bottle in order to meet your goals.

We will live in giant spaceships

Unlike Musk, Bezos thinks that terraforming a planet is “very very complicated” and predicts that we will live in huge floating colonies in space where we will develop our lives.

Those colonies, Bezos says, will have nothing to do with current space stations. In fact, his vision has many similarities to the station in the movie ‘Elysium’: it will be cylindrical so that when it rotates it can create artificial gravity thanks to centrifugal force. The colonies will have “rivers and forests and wild animals” and many of the things that we now enjoy on Earth. Also, the space stations Bezos envisions will be located very close to Earth in case you have to go back for anything, which is always nice.

Bezos says that once people start living in space, they will visit Earth in the same way that they visit Yellowstone National Park today. It will be a kind of museum and vacation resort in which future generations will be able to enjoy nature and, probably, the red prawns of Denia and the spider crabs of the Rías Baixas, if they still exist.

“How can there not be aliens?”

With more than 200 billion stars in our galaxy and the millions of millions outside it, Bezos does not conceive that there is no intelligent life outside of our planet. “How can there not be aliens,” he said. But he doubted that these extraterrestrial beings have visited Earth because for him they have no interest in leaving his solar system. “I doubt it very much,” he said. “I think we would know if we had. But are they out there? Probably”.

The billionaire made a cameo in ‘Star Trek: Beyond’. There he made a brief appearance in which he played an alien, although there are people who think that he was actually playing himself. Bezos in this interview has neither confirmed nor denied it.