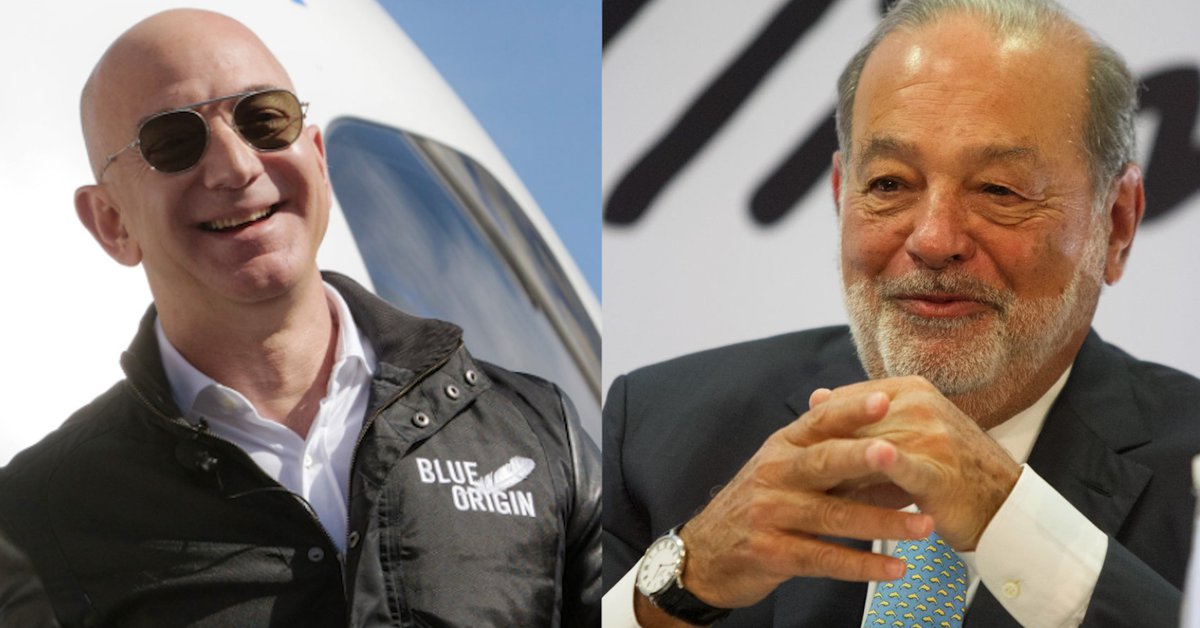 Tweet
Share
Share
Pin
Carlos Slim was the richest man in the world in 2010, since it is currently occupied by the American businessman Jeff Bezos (Photos: EFE // Cuartoscuro / Moisés Pablo)

In 2010, the Mexican businessman Carlos Slim Helú was crowned the richest man in the world, with an estimated fortune of USD 53,000 million. With this figure he managed to unseat Bill Gates, computer scientist and co-founder of the Microsoft company. Although the owner of Grupo Carso was the wealthiest personality on the planet for four years, in 2014 he was again displaced by Gates due to the telecommunications reform approved in Mexico during that year, according to specialists.

Since then, the “telecom mogul” has fallen in the annual rankings of billionaire entrepreneurs globally and currently ranks number 16 in the famous ranking of Forbes, with a wealth that amounts to USD 55,930 million. Although Slim maintained the second position of Billionaires for two years, in 2016 it was placed in fourth place and by 2017 he was ousted by Jeff Bezos, the first businessman who managed to collect a fortune of 12 figures; Amancio Ortega, owner of the Inditex textile conglomerate and Mark Zuckerberg, programmer and co-founder of the social network Facebook.

The founder and CEO of Amazon managed to displace Slim’s fortune with a net worth valued at $ 72.8 billion, USD 18,300 million more than the wealth registered by the also owner of América Móvil. In accordance with Forbes, in 2017 the podium of billionaires was headed by Bill Gates; Warren Buffet, American investor and businessman who is also known as the “Oracle of Omaha” and, for the first time, by Jeff Bezos, who a year before was in fifth position.


According to the list of billionaires, When Jeff Bezos was ranked third in the annual rankings, Carlos Slim’s fortune was valued at $ 54.5 billion. Only from 2015 to 2016, the Mexican businessman was considered one of the biggest losers in the ranking, since the American magazine estimated that in that period his assets fell by more than USD 25,000.

It should be noted that the founder and CEO of the online store Amazon was the one who earned the most in 2017, adding USD 27.6 billion to his wealth. This was not the first time that Bezos unseated Slimsince according to the billionaires list Bloomberg, the Albuquerque businessman managed to surpass the telecommunications mogul’s fortune with $ 1 billion in 2015, which at that time was $ 57.2 billion.

The fortune of the Mexican businessman was surpassed in 2017 by that of Bill Gates, Warren Buffet, Jeff Bezos and Amancio Ortega (Photo: Luis Antonio Rojas / Bloomberg)

Currently, the owner of the e-commerce giant has a cumulative fortune of USD 177,000 million, which means that he has USD 121,070 million more than Carlos Slim. To give us an idea of ​​the dimension of this, it translates almost to all the fortune that businessman Bill Gates currently has, who for some years the first place was fought with Slim.

Bezos first became a billionaire in 1998, a year after the Amazon company went public as an online bookseller. At the time, the company was just beginning to expand on previous books by allowing customers to buy CDs online. Over the next two decades, Amazon’s business began to expand into other industries. In 2005, the company launched its now famous membership service Prime, which offers free deliveries to customers who pay a monthly fee of 99 pesos.

Carlos Slim or “El Tigre” Azcárraga: who was richer in the nineties
How much money Carlos Slim has compared to Elon Musk, the second richest man in the world
What businesses made the ten richest men in Mexico millionaires