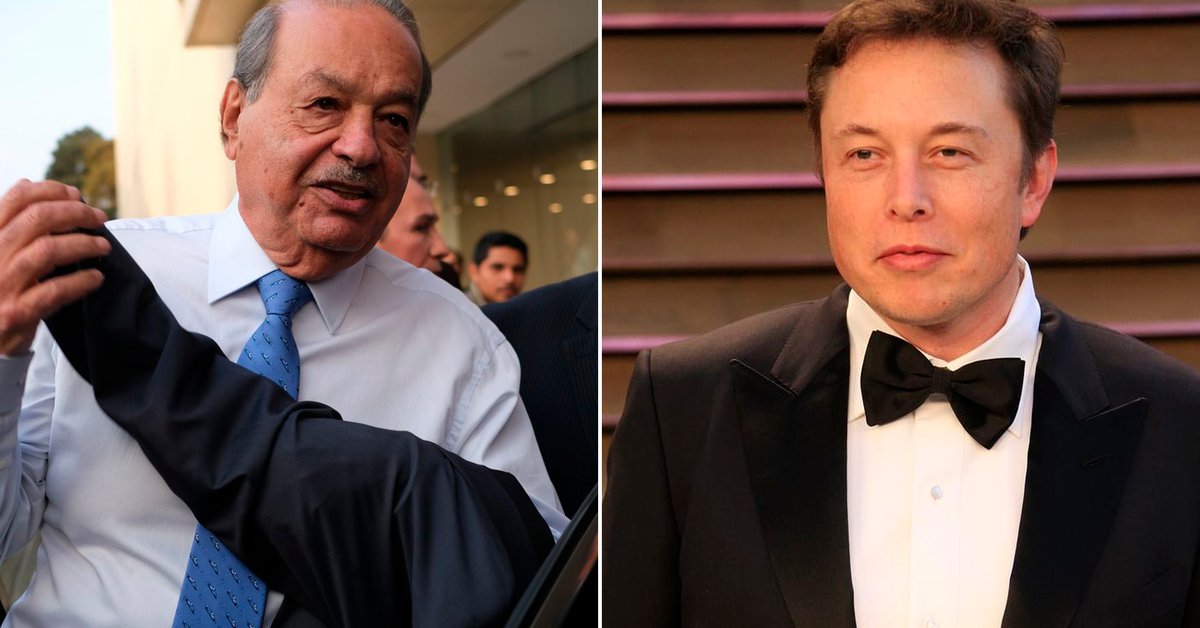 Businessman Carlos Slim is the richest man in Mexico. With a valued fortune, according to the American magazine specialized in financial matters Forbes, on USD 55,930 million, also ranks 16th among the wealthiest people in the world.

Slim came to be considered the richest man on the planet from 2010 to 2014, however, little by little he fell in position until he found himself where he stands today. Currently, the richest man in the world is Jeffrey Preston Bezos, better known as Jeff Bezos, who is an American businessman, founder and currently CEO of the online sales company Amazon.

In back of Bezos, is another businessman of South African origin, but naturalized American and Canadian. Is about Elon Reeve Musk, better known as Elon Musk. He is a co-founder and leader of the electric car company Tesla, in addition to owning the producer of space rockets SpaceX.

This means that Musk has a fortune far superior to that of the Mexican of Lebanese descent Carlos Slim. The American has USD 95.07 billion more than Slim.

Musk, as co-founder and director of Tesla, is responsible for leading the design of products, in addition to the engineering and manufacture of electric vehicles, battery products and solar energy products worldwide, according to information provided by the official website of the company in charge of producing electric cars, owned of Elon.

He is also the lead designer for his company SpaceX. In it, the businessman supervises the development of rockets and space vehicles for orbital missions around the Earth and other planets.

Another of the companies of which Musk is CEO is Neuralink, that develops brain-computer interfaces, ultra-high-bandwidth to connect the human brain to computers. The Boring Company is another of the companies launched by the businessman. It combines fast and affordable tunneling technology with an all-electric public transportation system, which is intended to alleviate stressful urban congestion and allow high-speed, long-distance travel.


Musk, in the past, also co-founded PayPal, the internet payment system, which he later sold. Zip2 it was one of the first map and address services on the Internet. Musk was also a co-founder of the latter.

For his part, origin of Slim’s fortune goes back to his childhood, since at the age of 10 he discovered a place where they sold wholesale sweets and his first business was to resell that merchandise under the stairs of his house, located in Polanco, very close to Lincoln Park. In addition, the businessman of Lebanese origin began working with his father, Julián Slim Haddad, Since he was very young and thanks to him he had an approach to the world of finance and business, since he gave him basic lessons in financial education.

After studying at the Faculty of Engineering of the National Autonomous University of Mexico (UNAM), where he received the title of Civil Engineer; Carlos Slim began to found the bases of Grupo Carso, one of the largest and most important business conglomerates in Mexico and Latin America in terms of infrastructure, construction, energy, industry and research. The formation of this consortium was thanks to began to acquire industrial companies and, the profits obtained from these businesses, were reinvested or used to get more companies.

How much money Carlos Slim has compared to Jeff Bezos, the richest man in the world
What did Soumaya Domit die of, the great love of Carlos Slim
Who is Michel Kuri, the millionaire businessman Carlos Slim’s nephew and Lucero’s boyfriend
How much Carlos Slim’s fortune has decreased in the last ten years