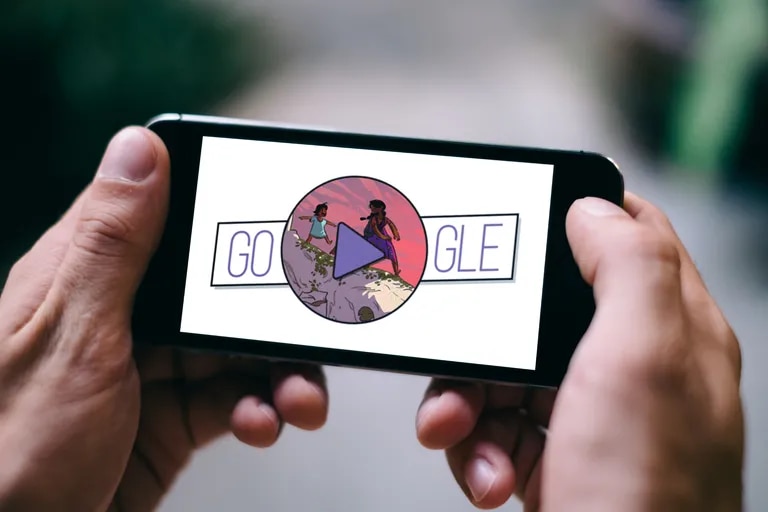 more than 20 years that Google makes an exception in the characteristic minimalism of their page to innovate through their logo in what they have called doodlea great play on words between Google and scribblethe meaning of doodle in Spanish.

The concept of intervening the brand was born a month before Google. In 1998, founders Larry Page and Sergey Brin confirmed their attendance at the burning man festival, in the Nevada desert, and put a stick figure behind the second O of the browser beta. The goal was a nod to its users to say that they were out of the office. The second doodle was in 2000 to commemorate the Bastille Day and from then on it became a resource to commemorate festivities and anniversaries. Little by little it expanded to concepts that go beyond the United States, and they stopped being static images thanks to their interdisciplinary teams with illustrators and programmers who work in each of the files. Today, More than 5000 doodles have already been created for the main pages of the whole world, that can be visited here.

We Argentines have also seen ourselves represented over time: the following have passed through the logo: Mercedes Sosa, Luis Alberto Spinetta, René Favaloro, Juan Manuel Fangio, Gustavo Cerati, etc. But women made invisible by history books were also honored. In this case, the doctor and women’s rights activist petrona eyleborn in 1866, rescued in the #CientificasDeAcá project and honored by Google on her birth anniversary.

That there are women represented is not a coincidence. This trend has to do with equity in the representation of the search engine, not only of sex (in Google they assured LA NACION that the share of representation today is 50%) but also other cultures, nationalities, ethnic groups and religions. This took some time. The first woman to appear in a doodle was Florence Nightingale (English nurse and pioneer of medicine) in 2008. Although they explain that the International Women’s Day commemorated as a doodle since 2005, it is clear that the search engine was also deconstructing its biases, seeking to have a balanced representation, as it has been in recent years.

Its managers explained, in an interview with LA NACION, what the backstage of the office is like and what the process to choose, design, program and launch a doodle consists of. Jessica Yu She is the leader of the Doodle team at Google and supervises the world’s doodlers, although the main team is in the United States, made up of 30 people, including artists, illustrators, animators and programmers. In each country where the company has a local presence there are also managers. And anyone can also suggest ideas by writing to doodleproposals@google.com.

Pearl Fields, product marketing manager, oversees this creative process and tries to make it a diverse, equitable and inclusive proposition. Not only for the United States but for the rest of the world: “We receive thousands of ideas a year. We got together as an idea review committee and we went through every one of them, and there are a lot of criteria that we look at for doodles, but I think the biggest single factor, for us, is trying to come up with an offering that’s diverse, equitable, and inclusive of both as we can We make sure that every doodle we run includes underrepresented communities.”

Currently they are presented 450 doodles worldwide per year that follow the common thread of disseminating culture and history. In their style manual, they indicate that it is forbidden to promote anything internal or external: “It is not propaganda but to help people feel seen, heard and valued,” Campos illustrates and says that other aspects of diversity pay close attention and, for example, race, ethnicity, ability, occupation, age and period. Sometimes, they go to different communities and invited artists in case the theme involves them. for creation of the Doodle that the Zuni tribefor example, partnered not only with the tribal community government but with guest artists and Zuni musicians to create the music.

How long does it take to make a doodle? Campos indicates that the average is six hours, although some took up to two years. It seems little, although it is counted from the moment the decision is already made. Before, it can take months or years, and often includes paying royalties to both outside artists and organizations.

Although it is difficult to count the success of each one of the doodles, the interviewees agree that not all of them are universal favorites, but nevertheless they always have their public that appreciates them. On this site can be searched by date and subject the historical file. On the search engine home page it will continue to be a surprise, every day and in every country.

How do you make a doodle? The backroom of the making of Google’s doodle