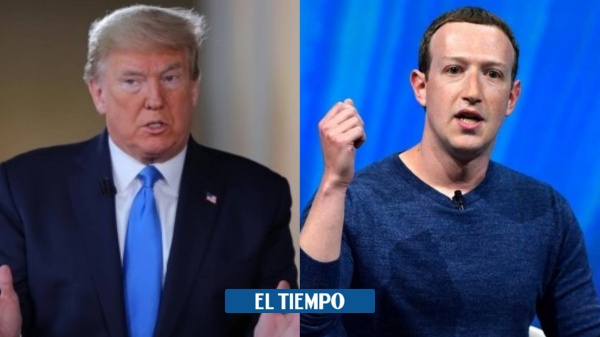 In january of this year Facebook blocked the account of the former president Donald Trump due to the misuse it gave in the framework of the episodes of violence recorded on the 6th of that month in the Washington Capitol. This was stated at the time by the executive director and founder of this social network, Mark Zuckerberg.

Apparently, this did not like the tycoon, who recently in an interview with ‘Fox News’ attacked Zuckerberg, assuring that he visited the White House and “kissed his ass.”

(Also read: Trump will comment on a boxing fight in full commemoration of 9/11).

“He used to come to the White House (Zuckerberg) to kiss my ass and I’d say, ‘Oh that’s good. I got the Facebook head coming with his lovely wife (Priscilla Chan) ‘”, Assured the republican.

For this reason, it ensures that the closing your account on Facebook and Instagram as a result of his content related to the assault on the Capitol surprised him: “They come and have dinner at the White House and then you see what they do to me and the Republicans (blocking them from Facebook), it’s crazy. But this is how the world works”.

Another of the social networks that permanently closed the Republican’s account for violating its content policies was Twitter, which was a hard blow for him because it was the platform he used the most and from which he used to report on part of his foreign and internal politics.

(You may be interested: Trump hires two veteran political advisers with 2024 in mind.)

For this reason, the billionaire announced on July 7 that he will file a class action lawsuit against Facebook, Twitter and Google. According to him, these platforms censored him and, therefore, his next fight is focused on freedom of expression on social networks.

“I am filing, as main representative, a class action lawsuit against big technology, including Facebook, Google and Twitter, as well as their CEOs, Mark Zuckerberg, Sundar Pichai and Jack Dorsey,” he announced at the time from his Bedminster golf club , New Jersey.

(We recommend you read: First prison sentence handed down for assault on the US Capitol).

Similarly, he expressed that Twitter is a boring social network without him and his controversial contributions, which even created conflict with North Korea and Iran. “Twitter has become a very boring place. I don’t want to brag or anything like that, but people say it has become very boring,” he said.

The truth is that the Twitter account of the former Republican president was permanently suspended, even if he was reelected in the United States presidential elections in 2024. This was stated by the company’s chief financial officer, Ned Segal.

For their part, Facebook and Instagram held a supervisory meeting in June this year in which they voted in favor of maintaining the ban on Trump for at least two more years.