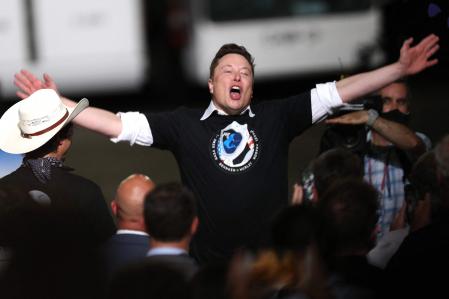 The criticisms of Elon Musk they have a price and more if they come from the template of SpaceX. As reported by the New York Timesworkers at the space company who criticized their CEO’s behavior have recently been fired.

The departure of the former SpaceX workers was accompanied by an email, sent last Thursday afternoon, in which Gwynne Shotwell, president of the company, justified that the rest of the employees “feel uncomfortable, intimidated and harassed, and/or angry” because “the letter pressured them to sign something that did not reflect their views.

The dismissal of this group of Space X employees comes just days after they wrote and distributed an open letter criticizing the CEO’s behavior Elon Musk. In the text, they called Musk a “distraction and an embarrassment” and noted that “SpaceX must quickly and explicitly separate itself from the Elon personal brand.” Now, these workers have been fired immediately. Musk doesn’t mess around.

The letter argues that the company is not abiding by its zero-tolerance policy against sexual harassment. The document goes on to suggest three “action items” to address your CEO’s situation. First, the text says, SpaceX should “publicly address and condemn Elon’s harmful behavior”; second, the company would have to “hold all leaders equally accountable” for the misbehavior of the company owner; and finally says that SpaceX needs to “clearly define what exactly is intended by ‘zero tolerance’ policies and apply them consistently.”

Musk has problems piling up in his two main companies. If in Space X he has mounted a rebellion for his outbursts on Twitter, in Tesla he has another open front that could take the company to court. A shareholder in the electric car maker has sued Elon Musk and his board for failing to address complaints about discrimination and harassment and breeding a “toxic culture in the workplace.”

Tesla has created a toxic workplace culture based on racist and sexist abuse and discrimination against its own employees.”


“Tesla has created a toxic workplace culture based on racist and sexist abuse and discrimination against its own employees,” said investor Solomon Chau. “This toxic work environment has been brewing internally for years, and only recently has the truth about Tesla’s culture come to light,” he added in the lawsuit.

For its part, Tesla has said it does not tolerate discrimination and has taken steps to address worker complaints. The lawsuit accuses Musk, 11 members of Tesla’s board of directors and the company of breaching their fiduciary duty by failing to address and remedy red flags regarding internal reports of discrimination and harassment.

Elon Musk did not have enough with the employees of his two main companies, Tesla and Space X, who will now also have to deal with those of Twitter. This Thursday, during a meeting on Twitter, the tycoon has addressed the employees of the social network for the first time since he agreed to buy the company for 44,000 million at the end of April.

Elon Musk discussed his stance on what types of content should be allowed on Twitter’s social network, noting that people should be allowed to say “pretty outrageous things” but that the platform doesn’t have to give those posts scope.

Specifically, he said Twitter should allow more room for people to say what they want, Musk said, as long as it doesn’t break the law. But he added that the company needs to balance that by making sure people “feel comfortable” with the service, otherwise they won’t use it.

Employees who attended the meeting said Musk also discussed possible changes to the product, including the idea that users would have to pay to be verified as real human users, through a tool like subscription service Twitter Blue. . He also proposed that Twitter use verification as a way to classify content on the platform.

When asked about possible layoffs, Musk did not rule out the idea, saying Twitter “needs to be healthy.” “No one who is a major taxpayer should have anything to worry about,” he added.

He was also asked several questions about employees working from home, something Twitter started allowing full-time more than two years ago. At Thursday’s meeting, Musk said the priority would be for people to work together face-to-face, but if someone is “exceptional at their job,” those people may continue to work remotely.

No one who is a major taxpayer should have anything to worry about.”

Elon MuskCEO of Tesla and SpaceX


Musk has also publicly criticized Twitter’s products, executives and policies since reaching the deal, frustrating some employees who are concerned he doesn’t understand the complexities of running a large social media company.

The definitive agreement between Musk and Twitter is still up in the air, although it is getting closer, especially after the social network agreed to make millions of data about its false accounts public. Some close to Twitter viewed Musk’s appearance at Thursday’s meeting as a sign that he is committed to completing the deal.

A few months ago, Elon Musk offered $44 billion for Twitter. The purchase was about to be carried out when overnight, the tycoon announced that the agreement was paralyzed. The social network revealed that 5 percent of users are bots, a figure that the billionaire publicly questioned and that led him to quarantine his proposal. Finally, the platform agreed to give the CEO of Tesla and Space X access to the more than 500 million tweets published daily in the coming days.

Now that he has the data, Musk could put an end to his doubts about the number of fake accounts circulating on Twitter. According to the social network, they are 5%, according to the tycoon, they could represent up to 20% of the total.

Elon Musk: Space X employees are fed up with being embarrassed by his tweets