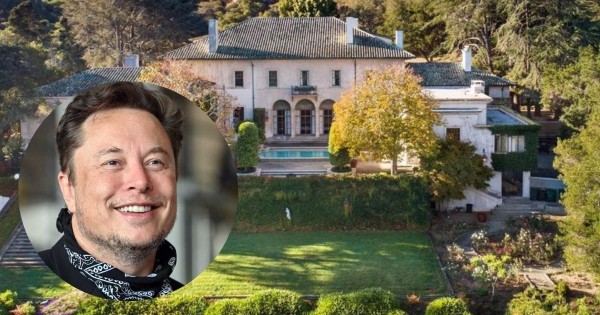 The billionaire Elon Musk landed a buyer for his home in Hillsborough, California. With a price of almost $ 32 million, the 15,000-square-foot property on the outskirts of San Francisco it was sold after 52 days on the market.

The ad, posted on the Realtos.com site, described the mansion thus: “Rare opportunity to own one of the largest parcels of land, over 47 acres, on the San Francisco peninsula with panoramic views of the bay and the city skyline. This property of around 1912, has been transformed today with renovations including a completely renovated and expanded 5-star kitchen with space for a personal chef, a large living room with restored windows a library with leather walls and a fireplace. Separate dining room and cocktail lounge. ”

But not only does it have details that are seen, the luxury is also behind the scenes: “The updates to the infrastructure include fiber optic cable under the entrance, high-end security system, interior sound system and restoration of various period features. Just 15 minutes from the San Francisco airport and from the private jet center. Reservoir on the property for garden irrigation. Excellent public and private schools, “the ad described.

Ownership of a total of 7 bedrooms, 9 bathrooms, full size kitchen and pool, it was not long in the hands of the founder of Tesla. In fact, Musk had bought it in 2017 for a total of $ 23.3 million.

In June of this year he had admitted on Twitter that he intended to sell it because “It is a special house that needs a large family to live there.”

The millionaire, who has reportedly been living in a humble 37-square-meter prefab house in Texas that he rents from his company SpaceX, has said he plans to direct all his assets toward his future mission to colonize Mars.

Last year, Musk got rid of four properties in Los Angeles, three of them in Bel-Air, according to the Los Angeles Times.

The largest of the three, a 1.5-acre six-bedroom, seven-bath mansion, sold for u $ s 29.72 million. On a nearby street, the fourth home sold for $ 21 million, Realtor.com reported.

Elon Musk sold his last mansion for $ 32M and was left without a house of his own – Infotechnology.com