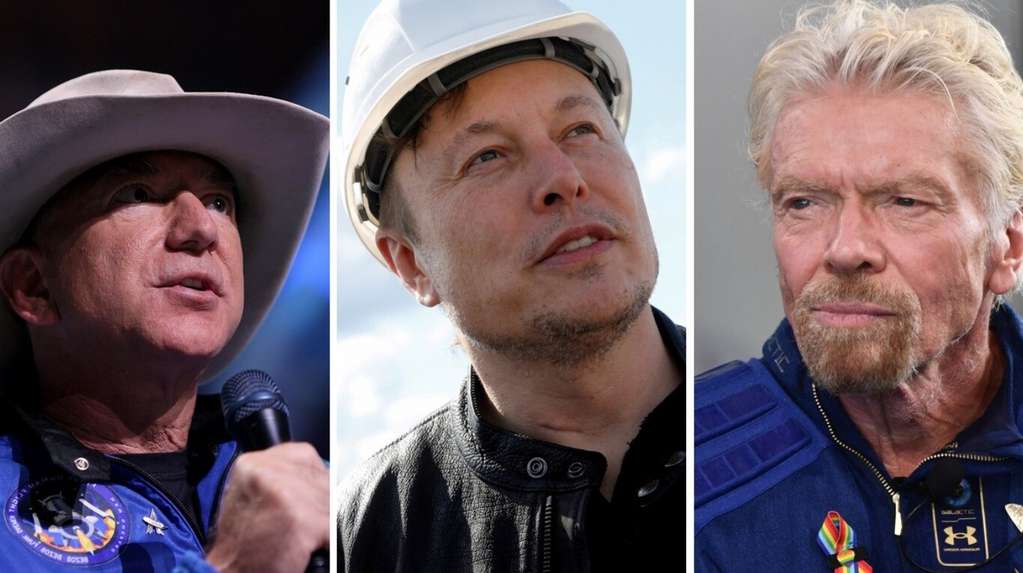 The space race it is no longer exclusive to government agencies, not even astronauts who have received rigorous training. Men and women barely prepared for microgravity have already boarded ships that inaugurated the galactic tourism business. The dream come true is carried out by three musketeers who coincide in their conditions as millionaires, and in being as bold as they are competitive. Which divos from Mar del Plata and Carlos Paz, Elon Musk, Jeff Bezos and Richard Branson slap each other to rank first on the billboard.

So far this year, the tycoons began the deployment of the spacial tourism. Analysts estimate that this budding activity could become a $ 3 billion industry in the next ten years. Of course: the first flights had a lot of marketers, the crews included passengers who appealed more to inspiration than to bulging wallets, and company owners also flew in, determined to be part of a madness that they are trying to rationalize.

In what follows we propose a review of the milestones that have already been achieved SpaceX, Blue Origin y Virgin GalacticIn addition to the aces peeking out from under the sleeves of their expensive shirts. We will also talk about the fights between billionaires who already have one leg on Earth and one in space.

Although space tourism has been around for years (there was even talk of the construction of hotels beyond our orbit), Branson’s Virgin Galactic had the honor of kicking off. In July of this year, the British-born businessman spent a few minutes in space aboard the VSS Unity, a ship manufactured by his company. The billionaire flew with two pilots and three passengers, reaching an altitude of 86 kilometers.

To have a dimension, a commercial flight reaches 12 kilometers in height. Yes indeed: there are those who consider that space itself begins when an altitude of 100 kilometers is exceeded, although in the United States they take 80 kilometers as a reference. As note National Geographic In a review dedicated to the dilemma, the answer depends on who you ask the question.

“I’ve dreamed of this moment since I was a child, but honestly nothing can prepare you to see Earth from space,” Branson said upon returning. As we have in TN.com.arWhen the ship’s engine was turned off, the passengers were able to detach themselves from their seats and float for a few minutes in weightlessness, admiring the curvature of the Earth through the windows.

Virgin ensures that more than 600 people have already bought their ticket to travel with them to space, a list that includes celebrities such as Leonardo DiCaprio and Justin Bieber. Actor Ashton Kutcher had also paid for his ticket but then decided to return it: he said he rethought the decision because of having young children.

Meanwhile, Virgin Galactic continues to dispatch tickets. It recently resumed selling after the United States aeronautical authorities gave him permission to resume space travel, after an investigation into the reasons why his ship deviated from course while descending on the July voyage.

Blue Origin, a flight with a lot of marketing

A few days after the milestone achieved by Branson, Jeff Bezos realized his own space adventure. Together with his brother and an eclectic group, he traveled in the New Shepard ship to cross the limits of the Earth. The journey lasted 11 minutes, narrowly exceeding 100 kilometers in altitude. There, the Amazon founder and his colleagues experienced weightlessness. “He felt so serene, at peace,” said the businessman upon returning.

The Blue Origin flight set some records. For example, the arrival of the oldest woman (Wally Funk, an 82-year-old woman who decades ago trained at NASA but was not part of any mission); and the youngest astronaut in history (Oliver Daemen, 18, the son of a Dutch businessman who joined the affair at the last minute).

“There is a person who was the first in space, his name was Yuri Gagarin, and that happened a long time ago,” Bezos said in statements to NBC, in reference to the milestone of the Soviet cosmonaut achieved in 1961. In that sense, he pointed out that the space race is not a bid between billionaires. “This is not a competition, this is about building a path into space so that future generations can do amazing things there,” he said. But he said that in relation to the Branson flight: if we talk about Musk, things get rougher.

SpaceX, projections of an ambitious guy

Elon Musk’s flight arrived later this year, in mid-September. However, it was the most ambitious: While Branson exceeded 80 kilometers of altitude and Bezos the 100, the SpaceX spacecraft was located 575 kilometers away from the earth’s surface. That figure is even higher than the location of the International Space Station, which is about 400 kilometers away.

The mission Inspiration 4 flew with a civilian-only crew. The four passengers spent three days in space orbiting the Earth with an approximate of 50 laps to our planet. “The risk is there,” said Jared Isaacman before leaving, one of the men who traveled with the group and operated as a leader based on his experience as a pilot. SpaceX President Gwynne Shotwell said that the mission seeks that in the near future “space is more accessible to all who wish to go”.

Meanwhile, Musk’s space company doesn’t just have these kinds of adventures with civilians in mind. In fact, it has signed a contract with NASA to manufacture the spacecraft that will take humans back to the Moon (they are, professional astronauts) as part of the Artemis mission.

War of egos and wallets

The British Branson does not seem to have major conflicts with his colleagues: Bezos has been condescending with him and Musk was present when the owner of Virgin Galactic returned to Earth after his flight into space.. The war is manifest between the bosses of SpaceX and Blue Origin, that shots are fired between trenches.

The lawsuit has escalated in recent months. “Bezos should try harder to get into orbit than to demand,” Musk shot in reference to the Lawsuit that the leader of Blue Origin filed with the Transparency Office, complaining about the contract between SpaceX and NASA. Also, mocking the altitude that New Shepard’s ship achieved.

As we noted earlier, in April of this year the US space agency chose SpaceX in a tender to build the ship that will take humans to the Moon. Two other private companies had come forward: Dynetics, also from the United States, and Blue Origin. “NASA should bet on its original competition strategy,” said Bezos and assured that without that bid the agency will soon run into “limited options when trying to negotiate over deadlines, design changes and cost overruns.”

When Musk participated in a conference a few days ago, took the opportunity to shoot Bezos. In addition to the chicana for the altitude achieved, the CEO of Tesla said that “you can’t get to the moon with demands”, Another reference to the complaints of his pair before the justice by the agreement between SpaceX and NASA.

Meanwhile, Bezos faces another front of conflict: Employees and former employees of Blue Origin denounced sexist and discriminatory practices within the company. For his part, Musk has shown new signs of his ego: reports indicated that he is offended that Joe Biden, the president of the United States, did not celebrate SpaceX’s achievements in space tourism.

Beyond the fights and tantrums, these first steps could mean a revolution for flights here, on the margins of planet Earth. As note Forbes, traversing Earth’s orbit means much faster travel: the associated benefit is being able to move between distant cities in a matter of minutes. By case, 14 hour trips could be 14 minutes.

According to the source, Musk himself is promoting a 40-minute flight from New York to Shanghai using his space flight technology.