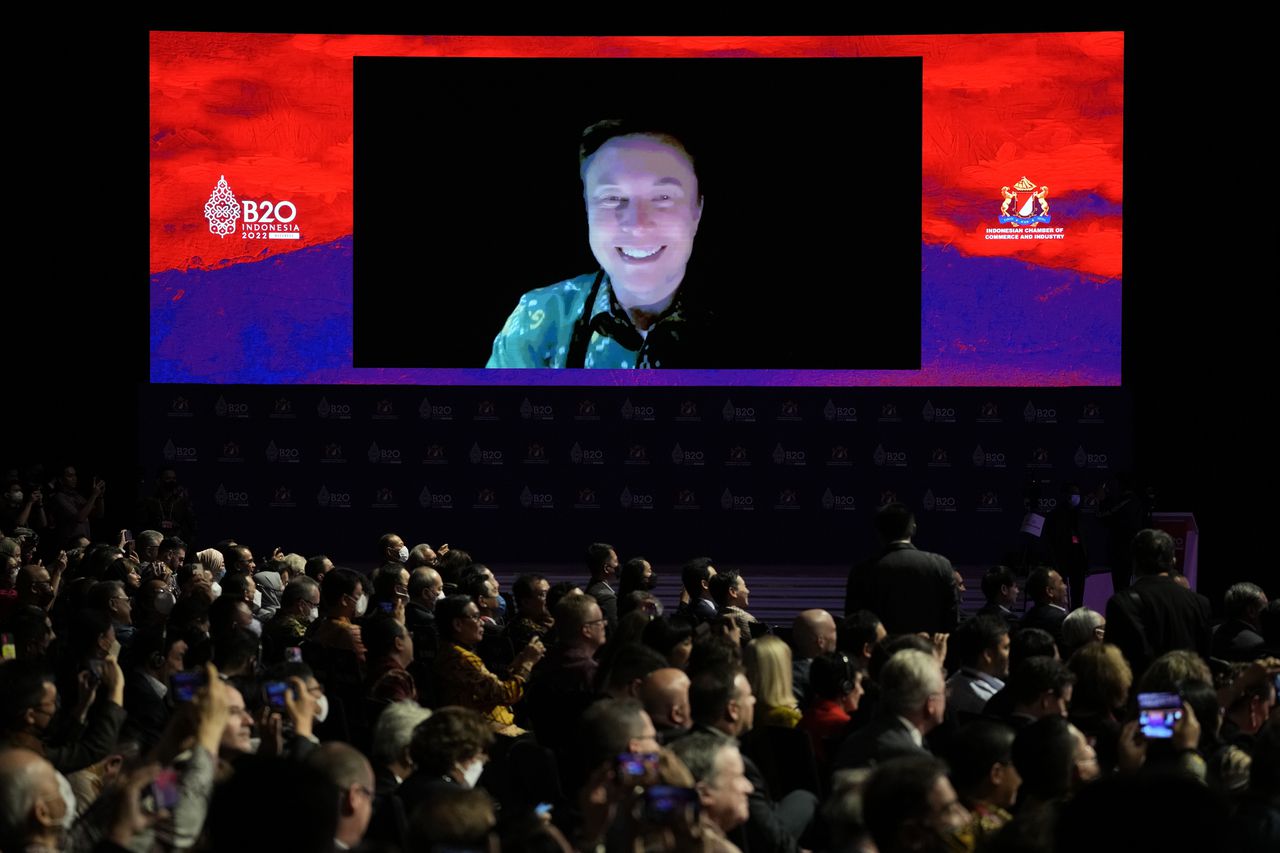 Sitting in the dark, his face half illuminated by a reddish light, the billionaire Elon Musk expounded at a side event at the G20 summit an eccentric vision of the future with aliens, rocket travel and a network of underground tunnels.

The new owner of Twitter appeared by videoconference at a business summit parallel to the G20 on the tourist Indonesian island of Bali.

Projected onto a large screen above the stage, Musk appeared as a ghostly image, with only his face and hands dimly lit and reddish in color, in the midst of a pitch-black environment.

“We’ve had a power outage three minutes before the call. That’s why I’m completely in the darkhe told the Indonesian businessman and moderator, Anindya Bakrie.

When he asked why he hadn’t traveled to the island, the new owner of Twitter joked that his “volume of work has increased quite a bit recently” for the purchase of the social network.

Later, he added little more about this controversial operation, which led to the dismissal of thousands of workers and the introduction of a fee to verify accounts.

The conversation especially turned to Musk’s peculiar vision of the future, with a network of underground tunnels to decongest traffic on the surface, rocket world travel and alien life.

The owner of the vehicle brand Tesla and the aerospace firm SpaceX defended that the mobility of the future would go through the electric car and a network of tunnels to relieve traffic congestion. Also showed interest in building rocket launch pads around the world so that people can travel “to the other side of the planet” at twenty times the speed of sound.

“I think this would really open up the world, if you could travel anywhere in less than an hour,” said the businessman.

Verified Twitter accounts with millions of followers have been suspended from the platform after they changed their usernames to “Elon Musk,” in another attempt to gauge the social network’s new owner’s moderation policy.

Comedian Kathy Griffin, whose verified account had two million followers, was among those suspended.

Elon Musk, who has described himself as a “free speech absolutist,” tweeted on Sunday that “Twitter users who impersonate others without clearly specifying that it is a parody will be permanently banned.” ”.

The h3h3Productions account, which changed its username to “Elon Musk” and is defined as a parody, also received a suspension from the network.

User @jephjacques changed his display name to “Elon Musk” and posted several satirical tweets referring to Musk’s strategy for running his new company. “Can everyone stop tweeting for a second? They go too fast to be able to moderate personally”.

The account, with more than 80,000 followers, was suspended shortly after.

Musk responded to a tweet referring to the suspension of comedian Griffin, adding to the impression that the owner is getting personally involved in decisions to ban accounts that target him.

“She was actually suspended for impersonating a comedianhe joked, prompting an apparent response from Griffin, who said he was now using his late mother’s account.

Since completing the complicated $44 billion purchase of the social network, Musk has publicly pondered how to profit from the acquisition.

Until now, His first actions include laying off half of the firm’s global payroll and announcing an $8 monthly blue badge charge on accounts.which had always been free and made it possible to differentiate official accounts from counterfeiters.

This Monday, November 14, Musk ruled on the midterm elections in the United States, asking independent voters to support the conservative Republican Party on the grounds that “shared power curbs the worst excesses of both parties.”

Elon Musk delivered his vision of the future at the G20 event: there are aliens, tunnels and rocket travel