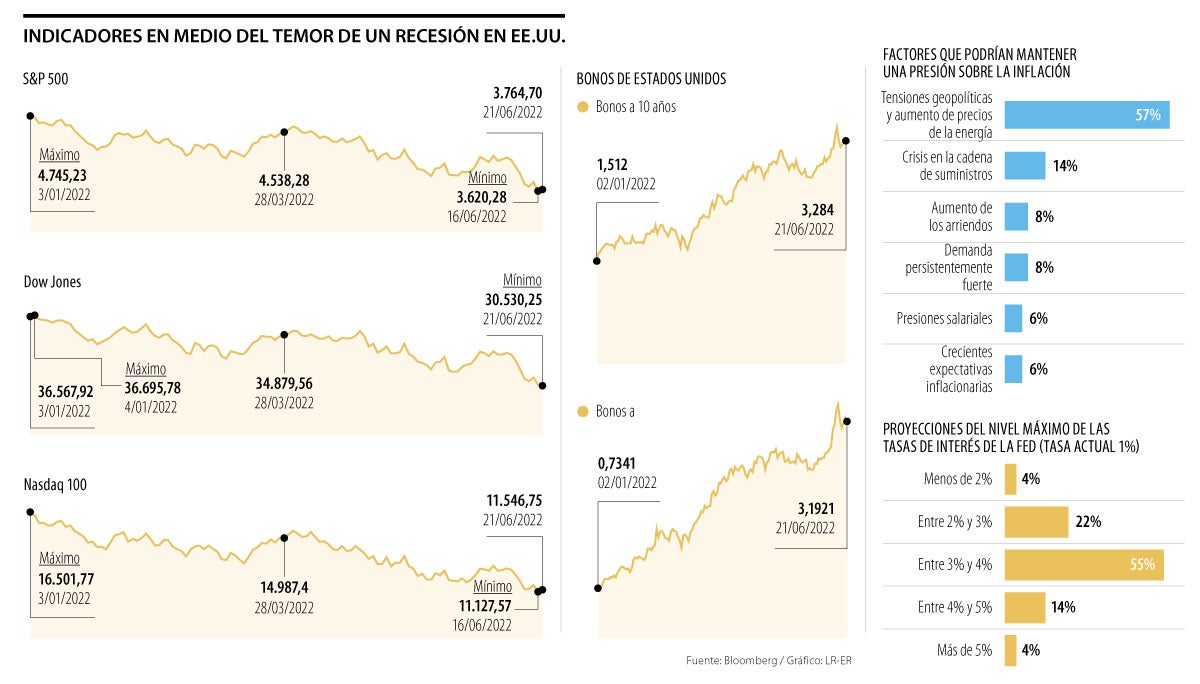 A few weeks ago it was said that the United States was unlikely to face a recession in the next two years, despite the fact that the bond markets are sending warning signs, that inflation is at its highest point in decades and that that geopolitical risks are on the rise.

But precisely the debate among analysts is accentuated if, as in the case of the recession, there is an indicator that to date has anticipated all those registered since 1955. This barometer is none other than the difference between the return on debt two-year US bond and ten-year bond. Every time its curve has been inverted, through the entry into negative of this differential, in a maximum of two years the US economy has entered a recession.

Under this formula and other projections, there are different characters and financial entities that see a recession as more likely or at least “a moderate one”. As JP Morgan did at the end of the week, and Goldman Sachs and even Elon Musk have just joined.

In the case of the Tesla founder, delegates at the second annual Qatar Economic Forum, from Musk and Nouriel Roubini to Bob Diamond of Atlas Merchant Capital and Bill Winters of StanChart, warned that the United States was headed for a recession.

The electric car pioneer told Tesla executives earlier this month that he had a “super bad feeling” on the economy, according to an internal email seen by Reuters. Seeking to quell a rise in living costs, the Federal Reserve accelerated its monetary tightening campaign last week with its biggest interest rate hike since 1994.

Economists at Goldman Sachs Group lowered their US growth forecasts and warned that the risk of a recession is rising. The team now sees a 30% chance of entering that phenomenon in the next year, up from 15% previously, and a 25% conditional chance of entering a recession in the second year. if one is avoided in the first, they wrote in a research note. That implies a 48% cumulative probability over the next two years versus 35% previously.

“We now see the risk of recession as greater and more important,” the economists led by Jan Hatzius wrote in the note. “The main reasons are that our baseline growth path is now lower and that we are increasingly concerned that the Fed will feel compelled to respond strongly to high headline inflation and consumer inflation expectations if energy increase even more, even if activity slows down sharply.

While comparisons to the 1960s and 1970s sound stronger, Goldman economists said rising wages and expectations of high inflation are less entrenched today than they were then.

“How would a recession? Without large imbalances to resolve, a recession caused by moderate overfitting would likely be shallow, though even the shallowest recessions have seen the unemployment rate rise by about 2½ percentage points on average,” the Goldman economists wrote. “An additional concern this time is that the fiscal and monetary policy response could be more limited than usual.”

While economists maintained their 2.8% growth forecast for the second quarter, they cut their outlook from the third quarter of this year to the first quarter of 2023, now forecasting growth of 1.75%, 0.75 % and 1%, respectively, in each of those quarters.

US stocks are staging a furious rally on Tuesday, but top strategists at Societe Generale as well as those at Goldman warn of further declines ahead as stocks have yet to fully price in the risk of a recession.

The Nasdaq 100 and tech-heavy S&P 500 each rose more than 2.6% on Tuesday after a sharp drop last week sent the US benchmark into a bear market.

While the sell-off is attracting investors looking for cheaper valuations, SocGen’s Manish Kabra says a “typical” recession will see the S&P 500 index fall to 3,200 points, nearly 13% below Friday’s close before the holiday.

There is also talk of a 1970s-style inflation shock, which could see the index plunge another 30% from current levels amid stalling with higher inflation, the strategist wrote in a note. The key interpretation of the 1970s is when investors begin to believe that inflation will stay high longer, equity markets begin to focus on the real rather than nominal earnings per share rate, which by this year will probably be negative, SocGen said.

“We haven’t seen the true bottom of the stock yet,” Kabra said. His counterpart Michael J. Wilson of Morgan Stanley, one of Wall Street’s most vocal bears and who correctly predicted the latest market sell-off, agrees that the S&P 500 needs to drop another 15% to 20% to about 3,000 points to break even. that the market fully reflects the scale of the economic contraction. “The bear market will not end until the recession hits or the risk of one is extinguished,” they said.

Elon Musk and Nouriel Roubini, among those who are glimpsing a possible recession

Bill Gates warns about the covid-19 pandemic: the worst is yet to come
Russia's bans on Instagram and Facebook will cost Meta almost $2 billion
You can't imagine the sector where Elon Musk has just debuted: his new product has broken all our sc...