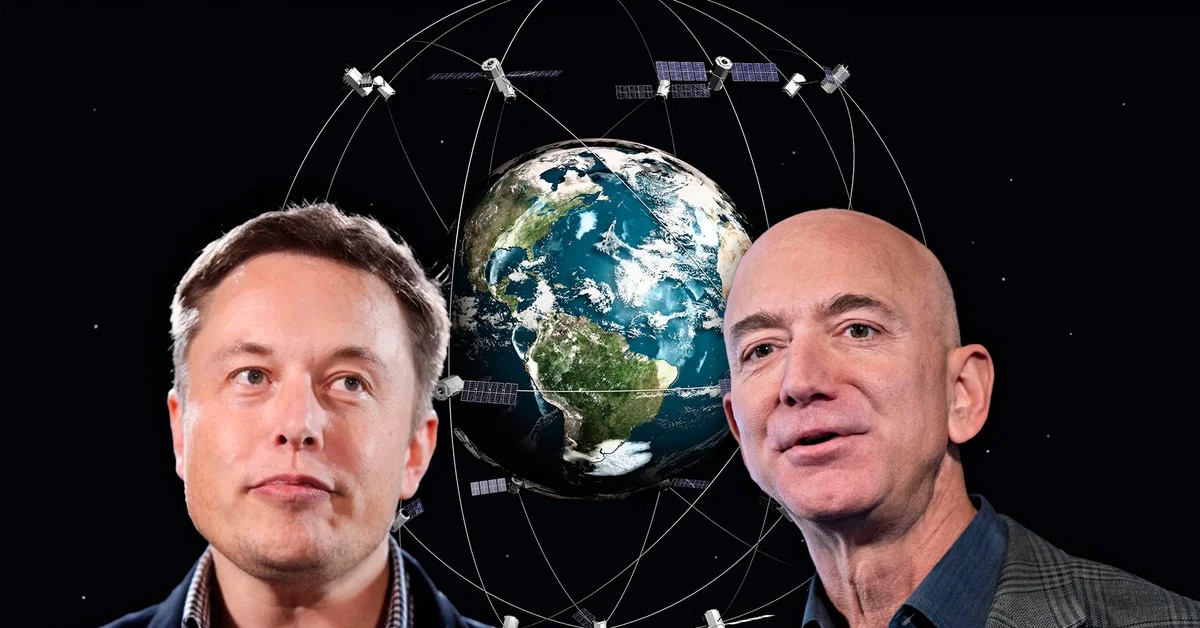 A new chapter adds to the long-standing rivalry between the two richest men in the world. Elon Musk, the owner of Tesla, recently said that Jeff Bezos, the creator of Amazon, takes himself “too seriously” and that his provocations towards the former CEO of the e-commerce company are intentional.

“In a way, I’m trying to entice him to spend more time at Blue Origin (the aerospace transportation company created by Bezos) so they can progress further,” Musk said in an interview with the Financial Times newspaper. With everything, Musk said his rival has “reasonably good” engineering aptitude, but that he doesn’t seem to be expending much “mental energy” on the details. “As a friend of mine says, I should spend more time at Blue Origin and less in the hot tub,” he prompted.

In 2014, the two companies had a dispute when Blue Origin was granted a patent for the drone boats, which are used to land rocket propellants.

The history of the rivalry between the entrepreneurs began with their interest in space travel. Bezos, who launched Amazon in 1992, was always interested in space. This is how he put it to the Miami Herald in 1982, after graduating as the best student in high school: he wanted to create colonies in outer space for millions of people.

Bezos launched Blue Origin in 2000, a company focused on manned spaceflight. At the time, Musk had already sold Zip2, a startup he launched with his brother, Kimbal, to Compaq for roughly $ 300 million. Musk was in the process of building PayPal, which would later be sold to eBay for $ 1.5 billion, according to data published by Business Insider magazine.

The founder of Amazon also created the company Blue Origin


Musk made about $ 160 million from the sale of PayPal and used that money to launch SpaceX in 2002. “At first, I didn’t even let my friends invest because they would all lose their money,” Musk noted during an interview on South by Southwest. 2018. “I’d rather lose my own money.”

In 2004, Blue Origin and SpaceX were still in their infancy and neither had completed a launch. But the rivalry had already started: when both businessmen met to discuss reusable rockets, the meeting did not go well. “I did my best to give good advice, which he largely ignored,” Musk said after the meeting, according to Christian Davenport’s book, “The Space Barons.”

In recent years, Musk and Bezos have made their feud public on social media. One of the crosses was for the reusable rockets

According to the timeline by Business Insider, earlier this year, Trung Phan, a writer for The Hustle business newsletter, tweeted a photo of Musk and Bezos smiling and sitting in a restaurant. Phan said the photo was from 2004, therefore it could have been taken at that dinner. Musk responded to the photo, tweeting: “Hard to believe that was 17 years ago!”

In 2013, SpaceX attempted to obtain exclusive use of a NASA launch pad. Blue Origin (along with SpaceX’s rival, United Launch Alliance) filed a formal protest with the US government to prevent it: Bezos proposed to make it “a commercial spaceport available to all launch companies.”

The founder of SpaceX at a conference at the Kennedy Space Center in Cape Canaveral, Florida

Musk called the move a bogus blocking tactic. “Blue Origin has yet to create a reliable suborbital spacecraft, despite having spent more than 10 years in development,” Musk warned Space News at the time.

“If they somehow show up in the next five years with a NASA standards-rated vehicle that can dock with the Space Station, which is what it is supposed to do, we will gladly accommodate their needs.” “I think we are more likely to discover unicorns dancing,” he added. SpaceX eventually won the right to take over the platform.

When the BBC asked Musk about Bezos in 2016, he replied: “Who?” He also called him a “copycat”

In 2014, the two companies had a dispute when Blue Origin was granted a patent for the drone boats, which are used to land rocket propellants. SpaceX claimed to invalidate that patent.

Blue Origin’s ownership of the patent would mean that SpaceX would have to pay to use that technology. SpaceX argued that the technology was “outdated” as the concept of unmanned spacecraft existed for decades. Justice agreed with SpaceX.

Jeff Bezos at the presentation of the BE-7 rocket

In recent years, Musk and Bezos have made their feud public on social media. One of the crossovers was for the reusable rockets. After Blue Origin landed its New Shepard rocket in 2015, Bezos proudly tweeted a video calling it “the rarest of beasts: a used rocket.” Musk responded: “not so rare”, and detailed that SpaceX had carried out the same feat three years before.

When the BBC asked Musk about Bezos in 2016, he replied: “Who?” He also called it a “copycat,” after Amazon announced its plan to launch satellites with Internet streaming and again when Amazon acquired self-driving taxi company Zoox.

In a lengthy Times interview, Musk, 50, took the opportunity to comment on Blue Origin, hinting that Jeff Bezos, 57, is too old to make any real progress. “The rate of progress is too slow and the number of years he has left is not enough, but I’m still glad he’s doing what he’s doing with Blue Origin,” Musk said.

In recent years, Musk and Bezos have made their feud public on social media.

Another confrontation came after Amazon refused to publish a book on the coronavirus by writer Alex Berenson, Musk tweeting that the situation was “insane.” Amazon’s Kindle Direct Publishing declined to publish Berenson’s book titled “Unreported Truths About COVID-19 and Lockdowns.” Later, Amazon claimed that the book was removed by mistake.

But they weren’t all fights. Bezos had some kind gestures with SpaceX: After the rocket company conducted a test of its Starship spacecraft in December 2020, he publicly congratulated the company on its ambitious attempt. “Anyone who knows how difficult this is is impressed with today’s Starship test,” Bezos wrote in an Instagram post, accompanied by a low-resolution photo of the rocket. “Congratulations to the entire @SpaceX team. I’m sure they will be back soon. ”

The Budget and the “happiness sheets”: the Government added expenses to the initial project for $ 417,000 million
Bonus for retirees: the Government detailed who will receive the $ 8,000 this month
Uncontrolled issuance: the BCRA transferred $ 250,000 million in December and will end the year at $ 1.4 trillion

Elon Musk acknowledged that he fights with Jeff Bezos on purpose: the new chapter in the rivalry between the richest men in the world