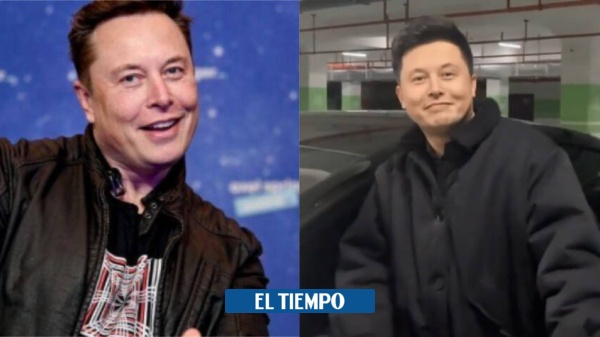 Elon Musk is one of the most prominent media and business people in the world. In fact, ‘Time’ magazine selected it as person of the year for his space conquests and his attempt to monopolize the automotive market with the luxurious electric cars of his company Tesla.

“Personality of the Year is someone influential and few individuals are more influential than Elon Musk in life on Earth and potentially beyond Earth as well,” Edward Fansenthal, editor-in-chief of ‘Time’ magazine, mentioned on his Twitter account.

Musk’s net worth soared to $ 223 billion, according to Bloomberg.

Adjectives are unnecessary for a person of great global influence such as the businessman who owns the space agency SpaceX, however, he ‘came out competition’. Someone who started to position himself as a quasi-digital celebrity.

He is a Chinese citizen who, despite not having Musk’s business emporium, bears an extremely striking physical resemblance to the South African.

It has been baptized by the digital community as Yi Long Musk and it has gone viral for its similarity to the CEO of Tesla.

(Keep reading: Synthetic courts in Bogotá: what do they offer and what is their price?).

Through a video on TikTok He was seen addressing the camera with words that try to emulate some of the businessman’s sayings. He also managed to ‘copy’ Musk’s smile and some of his movements.

The recording caused all kinds of comments on social networks. Some netizens have mentioned that it looks fake and that the Mandarin dialogue heard on the tape is staged.

Others second the skepticism, assuring that it is the product of an edition in a video program. They think it may be a montage ‘Deepfake’.

The people who are in charge of creating the ‘Deepfake’ are computer experts who copy the traits of a personality and mount them on another person at random in a very convincing way. So much so that it seems that the user is actually watching the footage of a recognized celebrity.

A recent example was seen with the fake Tom Cruise circulating on digital platforms. This Cruise made some entertainment videos, however, the fraud was discovered since some netizens recognized imperfections of the montage when the actor laughed.

The trap was revealed.

(Too: This is the luxurious truck that ‘Epa Colombia’ gave to his father).

Although it has not been determined whether or not it is a fake video, netizens are still amazed at the level of similarity that this Chinese citizen has with Musk and they do not skimp when commenting on their videos in the ‘app’.

“It’s more like Musk himself than the original” Y “That is not his cousin, he is a clone” are some of the opinions of users of social networks.

Passenger expelled from plane for wearing a thong as a mask

Christmas bonus novena: plans to do after completing the Christmas rite

Video: strange case of the ‘owl man’ who turned his head to his back