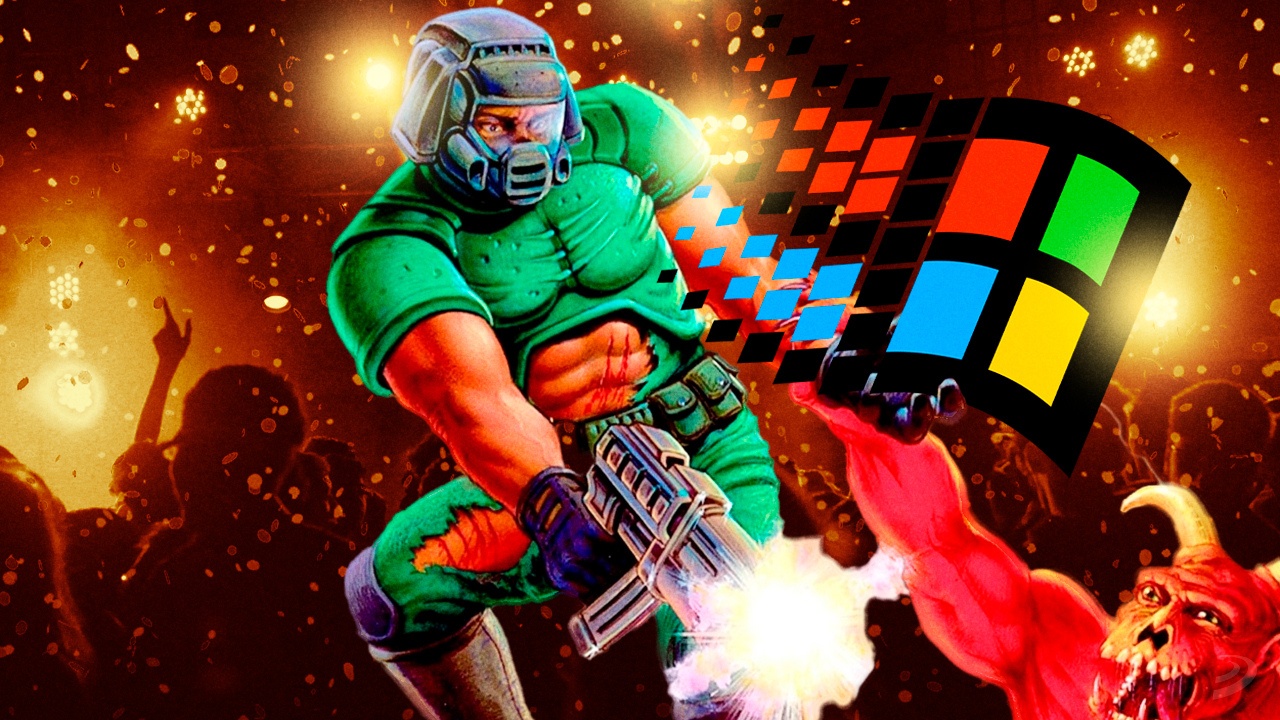 This story belongs to a time when marketing techniques were not as standardized as they are today, when people were doing crazy things and no one was putting their hands on their heads so much. Doom, Windows and a giant vagina as protagonists of Microsoft’s craziest event: this was Judgment Day.

Towards the mid-1990s, the video game Doom it was a real phenomenon. It was released in 1993 after a strenuous development in which marathon days of work were the usual trend. When players were able to test it, the servers crashed. There was no talk of anything else, and before long games like Marathon (Bungie) o Descent (Interplay) that tried not only to replicate its shooter essence, but also its success.

The key was in the gameplay, but also in the technology used, which amazed everyone who tried it. In Intel they did not stop playing, to the point that the company had to prohibit the use of the title. It was reducing employee productivity and undermining the US giant’s intranet networks. In Microsoft they also closely followed in the footsteps of a shareware game (free trial) that in a very short time had a brutal growth. Without going any further, it was rumored that he was outselling the almighty Windows 95.

How could such a video game be competing with the sales of an operating system backed by a multi-million dollar marketing campaign? The team of Bill Gates, focused on multimedia benefits, wanted to take advantage of the situation. Back then, Windows was a real pain for developers. The crashes were so common that they preferred to continue developing in MS-DOS. A solution was needed, and DOOM was going to jump right into that problem to elevate the W95 operating system as the best place to play games on PC.

Microsoft then developed a technology that PC users will easily recognize: DirectX, a programming interface that had its first version in 1995. Its function? Simple: put an end to game compatibility problems and give MS-DOS a folder. However, convincing the developers was no easy task. In fact, since Doom was already running on Microsoft’s old system and John Carmack had no interest in porting it, it was the Redmond people who volunteered to do the work themselves.

In the end, Microsoft’s goal was clear, and it was nothing more than to use Doom to say, “look what Windows 95 is capable of and the amazing games it can run.” The presentation of the Windows version of Doom It was done in style, renting a theme park amid the skepticism of the attendees. It was the first step towards success, which reached its peak in late 1995, when the Gates team came up with the ultimate event to support DirectX and its ability to run games of all kinds. They called it “Judgment Day.”

Of course, the name was most appropriate, because Microsoft was playing the future of Windows 95 as a video game platform (replacing the beloved MS-DOS). The idea was most peculiar: to turn Microsoft’s facilities into a haunted mansion. 75 video games were presented and companies such as Activision, Lucas Arts … and of course id Software were invited. Specifically, in the case of Doom, a team death tournament was organized, the largest that had been held until then and to which elite players from all over the world were invited.

Microsoft’s leadership was not convinced that DirectX was going to succeedEverything looked really good, although someone was missing: Bill Gates. His little interest in attending the truth is that he did not surprise anyone. Microsoft’s leadership was not very convinced that the DirectX movement was going to triumph, and Gates himself had a different idea (at least at the time) about the importance of video games in the multimedia world. Still, Gates was made to appear in a fun video of just three minutes in which he got into the role of a marine in the game Doom.

That curious video is part of the history of Doom, Windows and Microsoft, because it was exhibited for the attendees of that exclusive event. Seeing the computer guru dressed haphazardly and clutching a hunting shotgun without style was hilarious. But it worked. It was a quite lively event, in which the attendees were dressed up for the occasion of Halloween (It was October 30) and the stands were completely themed. For example, Pitfall for PC was presented there, which is why Activision prepared a jungle set with lianas for attendees to hang.

Everyone involved in this peculiar feat kept their jobs, and of course I suppose they did something well, because Doom was immeasurably successful and Windows became the main platform on PC to run video games. So much so that Bill Gates seems to have started to understand a little better the importance of video games (hence the support for the Xbox project), which went beyond the multimedia that was praised so much at that time. Definitely, a history lesson Which shows us how crazy they were at id Software, but also how great this industry can be when you live from the inside.

Did you know that the presentation of Doom for Windows had heavy metal and Bill Gates slaying demons? So was Microsoft’s Judgment Day.

Elon musk: every car in the world would be electrified in 4 decades
Crypto Entrepreneur Justin Sun Reveals He Was The Anonymous Bidder Who Paid $ 28 Million To Fly Jeff...
Passion week on Twitter: what is Elon Musk going to do with the platform?