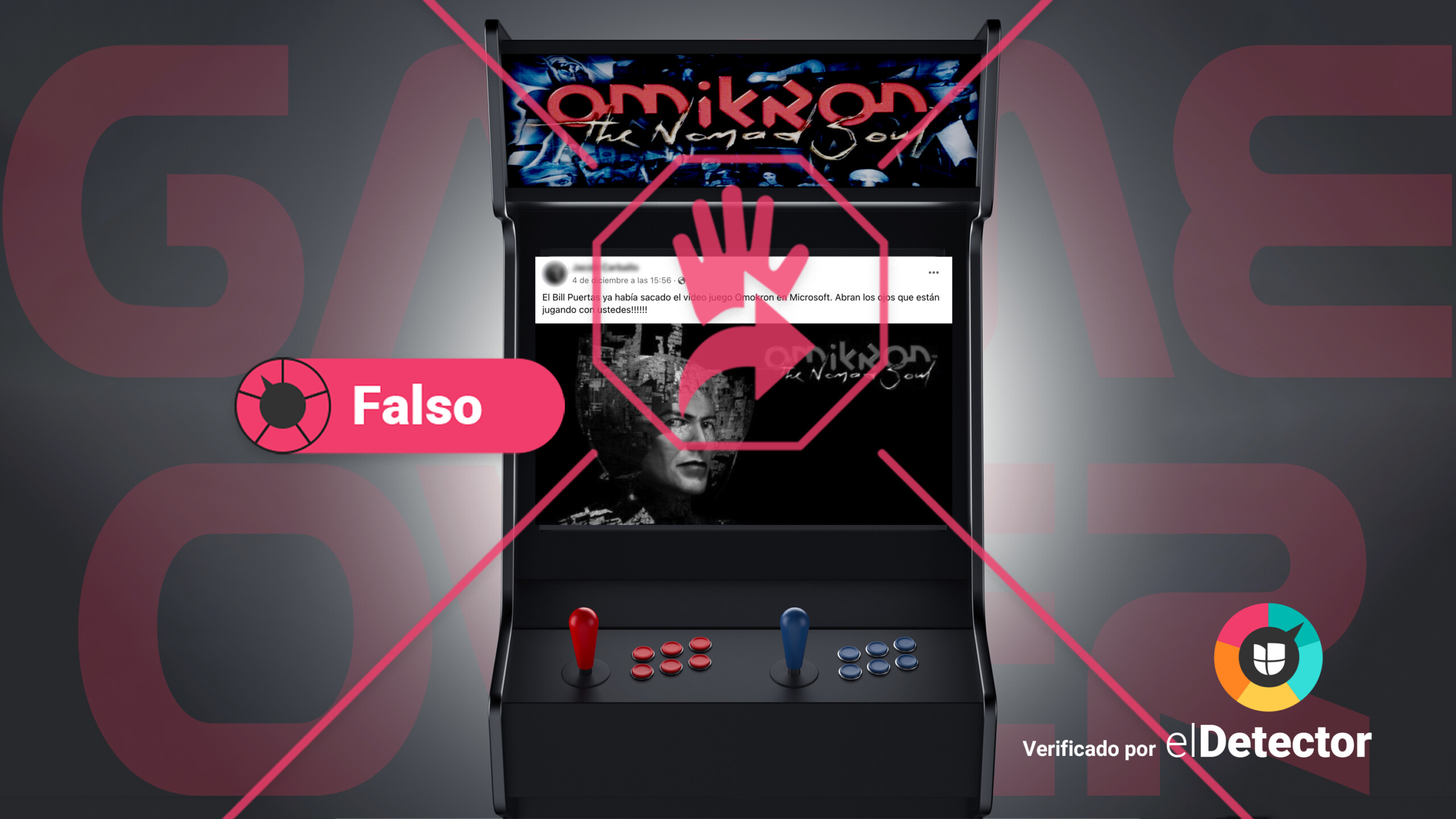 Is fake that Microsoft or its co-founder Bill Gates developed the computer game ‘ Omikron: The Nomad Soul‘(Omikron: the nomadic soul), distributed since 1999, as misinformed posts on social networks.

Neither is it true that this video game was a hidden preview of the appearance, 22 years later, of the omicron variant. In its plot, which takes place in a fictitious parallel world, there is no allusion to a virus, covid-19, the coronavirus or any of its variants.

That several things share a name does not mean that they are related. The World Health Organization named omicron after the fifteenth letter of the Greek alphabet and for no other reason.

‘ Omikron: The Nomad Soul’ was developed, since 1997, by the French study Quantic Dream, which has nothing to do with Microsoft: this company did not intervene in its creation, confirmed to elDetector your press team.

The game has a version for the Windows operating system, but that is not why Microsoft created it.

Microsoft denies its involvement in the creation of the video game

The Microsoft press team denies that the company or its co-founder, Bill Gates, had any kind of relationship with the development of the game, as they responded by email to elDetector.

“The video game was not developed by Microsoft / Bill Gates,” they wrote, on behalf of a company spokesperson.

A video game about parallel worlds, not about viruses

The game has the word omicron in its name, but that does not link it with the coronavirus.

‘ Omikron: The Nomad SouIt is about a parallel world in which is the city of Omikron. The player enters it and faces demons that feed on souls to strengthen themselves and take the city, the planet and the entire galaxy. That’s the synopsis posted on Fandom.com, a website where video game fans make forums to comment on them. It does not make any allusion to viruses, coronavirus or covid-19.

The Web Good Old Games, specializing in retro video games, describes that Omikron is a “dark and futuristic” city and that the ultimate goal of the game is to discover “why you are in Omikron and how you can get out.”

The idea of ​​the video game had been working on the founder of the company Quantic Dream, David Cage, since 1997 (two years before its release), according to the website of this study. Then the current coronavirus pandemic could not be anticipated.

On May 2, 1997, Cage founded the company “and signed his first contract with the British company Eidos Interactive to develop the game ‘ Omikron: The Nomad Soul’, the first to distribute it, says the page.

In the area of ​​”our studies” on its website, the company Quantic Dream presents itself as “a French video game developer based in Paris and Montreal, founded by David Cage in 1997.” There is no mention that they are wholly or partially part of Microsoft.

‘ Omikron: The Nomad Soul ‘went on sale on November 2, 1999, for use on computers with Microsoft’s Windows operating system. This does not mean that that is why the company that Bill Gates founded was involved in the creation of this video game.

In elDetector We contacted Quantic Dream and asked if the company had any kind of relationship with Microsoft or Bill Gates during the development of the video game in 1999; why they chose the word “Omikron” for the title and if during the work on the game they thought of some kind of pandemic or virus that would affect the Earth in the future.

We will update this verification when we receive your response.

“Ómicron” is also in the name of companies and stars

If we do an internet search with the keywords ” omicron company”, Results with that word come out in company names that have existed for decades and that have nothing to do with the variant of the coronavirus.

Also a architecture studio in Canada, a laboratory in Argentina and an international company in the energy sector that even clarifies on its website that it has nothing to do with covid-19.

“As an unfortunate coincidence, it turns out that the most recent variant of the COVID-19 virus [del coronavirus SARS-CoV-2] it was named ‘Ómicron’. Our company has had this name for almost 40 years ”, highlights on your page.

That several things have the same name or use the same word to define themselves does not automatically mean that they are related.

We already tell you in November the Greek alphabet is used in various specialties as a classification system. An example can be astronomy and how it baptizes the constellations with Greek letters.

In fact, there are at least three stars that have the word “omicron” in their name, how do we check December 9.

You can read here more verifications of elDetector on the false relationship between the use of the word omicron with alleged predictions of series, non-existent movies or supposed hidden plans with other sciences that use this letter of the Greek alphabet:

Is fake that the creators of the game ‘ Omikron: The Nomad Soul‘, put up for sale in 1999, had some knowledge that in 2021 there would be a pandemic or predicted in some hidden way the appearance of the omicron variant. That the name of the game uses a word like that of the variant of the coronavirus does not mean that they are related. It is also fake that this video game was developed by the Microsoft company or its co-founder, Bill Gates. The company denies it and there is no record of that participation on the website of the company that developed it, the French Quantic Dream. Like the video game, several companies have used the Greek letter omicron in their names for years. That does not make them suspected of having any link to the variant of the coronavirus. Lee here how we choose and assign our labels and elDetector.

This verification was done with the support of the Google News Initiative.

Did you see any errors or inaccuracies? Help us correct it. We also want to read if there are any messages or images that you want us to verify. Write to us at eldetector@univision.net

Did Bill Gates and Microsoft develop a video game about the omicron variant in 1999?