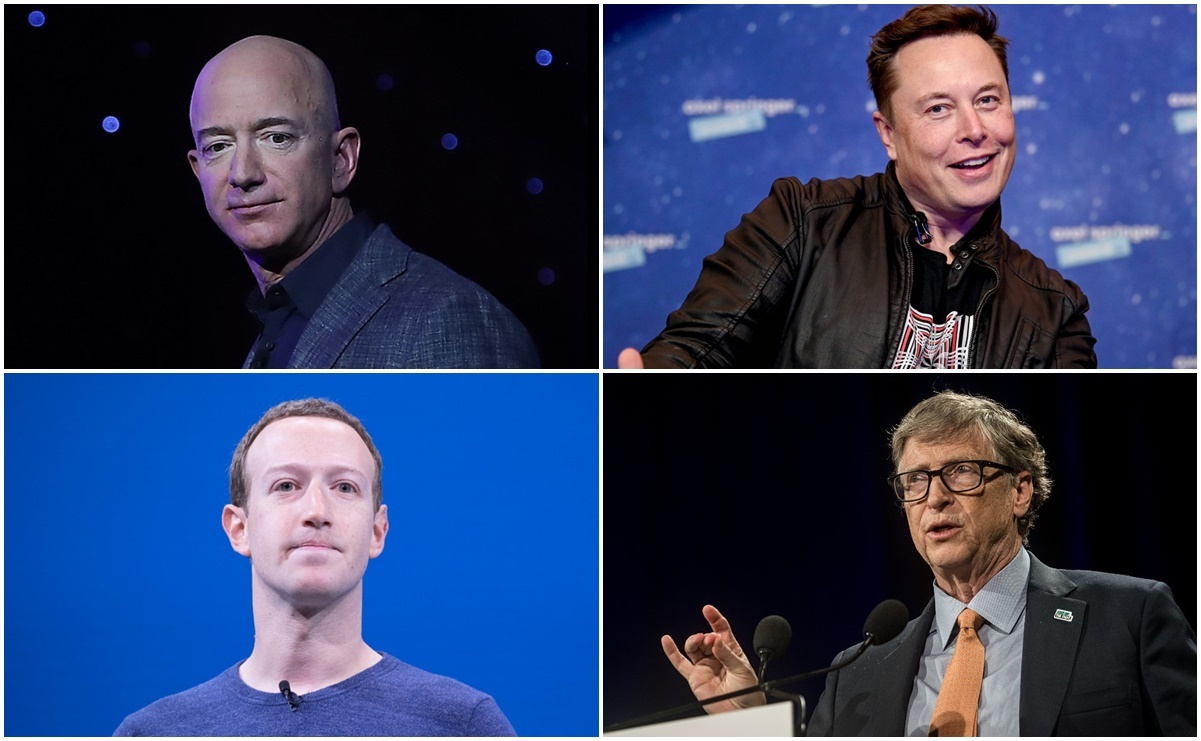 Last week Forbes released its annual list of americans plus rich. Within that count, the top 20 include personalities with fortunes valued at more than $ 36 billion.

The top 20 are made up of entrepreneurs who own transnational chains such as Walmart, Nike; to investors, financiers and, of course, CEOs of tech giants like Amazon, Tesla, SpaceX, Facebook, Google and Microsft, among other.

Jeff Bezos, Mark Zuckerberg, Elon Musk y Bill Gates They are the ones who head the list of Forbes, in which eight billionaires have a net worth of more than $ 100 billion.

Read also Trump, off the Forbes list of the richest for the first time in 25 years

Here are the 20 fun facts about the 20 richest American billionaires in the world. world:

1. Jeff Bezos
He is the executive president of Amazon, e-commerce giant, whose net worth is 201 billion dollars. He is also the first person in the Forbes annual list with a fortune greater than 200 billion.

2. Elon Musk
The owner of the Tesla and SpaceX companies, revolutionary in ground transportation and space rockets, has a net worth of 190.5 billion dollars.
Thanks to the sale of emission credits, he registered a very high income that boosted his fortune almost 120 billion, since in the 2020 ranking he had a fortune of 68 billion.

3. Mark Zuckerberg
At 37, the CEO of Facebook, a leading company in social networks (also conglomerates WhatsApp and Instagram), He is the youngest billionaire on the count. His wealth in 2021 is valued at $ 134.5 billion.

His wealth increased by almost 50 billion compared to 2020; However, after the worldwide interruption of its services and a scandal about unethical practices, Facebook lost 5.9 billion on the Wall Street stock market, which represented a 4.9% drop in its shares.

4. Bill Gates
Microsoft co-founder and philanthropist owns 134 billion dollars. And this 2021 is the first time that it comes out of the dispute for the first two places in the ranking of the richest; the cause is his separation from Malinda French Gates, his spouse, to whom he transferred a fortune of 5.7 billion in shares.

5. Larry Page
Board member and shareholder Google majority he has a fortune of 123 trillion (billions) of dollars. In just one year he managed to double his wealth, because in 2020 Forbes reported that he owned 67.5 billion dollars.

6. Sergey Brin
The 48-year-old Californian, like Larry Page, Sergey Brin He resigned from Alphabet, Google’s parent company, in December 2019, but remains a controlling shareholder and a member of the board.

7. Larry Ellison
Larry Ellison is president, chief technology officer, and co-founder of the software giant Oracle, of which it owns about 35.4%. It accumulates 117 thousand 300 million dollars.

He owns the yacht “Rising Sun”, one of the largest pleasure boats in the world, measuring 138 meters in length.

8. Warren Buffett
Warren Buffett, is 91 years old and is known as the Oráculo de Omaha, is one of the most successful investors of all time. It owns 102 billion dollars.

He has said that he started investing in the stock market too late, being that he was 11 years old when he bought his first share, eight decades ago.

9. Steve Ballmer
Who was CEO of Microsoft From 2000 to 2014, he is the ninth richest American in the world with $ 96.5 billion in his coffers.
He also owns the Los Angeles Clippers NBA team. His wealth increased according to the Forbes count by $ 27.5 billion this year.

10. Michael Bloomberg
The co-founder of the financial information company Boomberg LP, at 79 years old, has an estimated fortune of 70 billion dollars, 15 billion more than last year.

Michael Bloomberg has been the boss of many things: CEO of a financial data company, mayor of New York, the most populous city in the United States, director of a national gun control group, and founder of a news agency that bears his name.
Now according to a BBC note, the tenth richest man “seeks to occupy the seat of most power in the country (the presidency): this time as a democrat”

Walton is also president of the family’s Arvest Bank, which today has assets of more than $ 20 billion.

12.  Alice Walton
Another member of the wealthy Walton family, who is in fact the only daughter of Walmart founder Sam Walton. In its coffers it has 67.9 trillion dollars, which implies 5.6 trillion more than in 2020 when its wealth was calculated at 62.3 trillion. She is the woman with the highest position in the Forbes ranking.

In 2011, he opened the Crystal Bridges Museum of American Art in his hometown of Bentonville, Arkansas, exhibiting works by artists such as Andy Warhol, Norman Rockwell, and Mark Rothko.

13. Rob Walton
The eldest son of Walmart founder Sam Walton has $ 67.1 billion in his accounts. Being of the sons of Sam Walton the one with the least wealth.

In 1992 he assumed the presidency of WalMart after the death of his father and retired in 2015. He and other Sam Walton heirs collectively own approximately half of the shares of Walmart.

14. Phil Knight
The founder of Nike, one of the most recognized footwear brands, has a fortune amounting to 59.9 billion dollars. In the last year he increased his income by 20.7 billion dollars.

Knight retired as president of Nike in June 2016 after 52 years with the company. He has said he will donate 500 million to both the University of Oregon and the Stanford Graduate School of Business, his alma maters.

15. MacKenzie Scott
The second woman in Forbes tally it is estimated to have $ 57 billion. She is the author of two novels and was a student of author Toni Morrison at Princeton.

She is the ex-wife of Jeff Bezos, to whom she was married for 25 years. They divorced in mid-2019 and Scott received 25% of Bezos’ stake in Amazon, which was 4% of the company.

16. Charles Koch
He was president and director of the largest private company in USA, by revenue, since 1967: Koch Industries. Its capital amounts to 51 billion dollars, six thousand more than in 2020.

Diversified Koch Industries has about $ 115 billion in revenue from businesses that include pipes, chemicals, Dixie cups and Stainmaster carpets.

17. Julia Koch
Wife of the late David Kock-brother of Charles Koch-, in 2019 along with his three children inherited 42% of the shares of Koch Industries. It went from having a fortune of 51 billion dollars in 2019 to 51 billion in 2021.

In 2016 Dell merged with EMC, a computer storage company, an operation that had an estimated cost of 60 billion, which was completed in 2016. It is considered the largest technology acquisition in history.

19. Stephen Schwarzman
The son of a dry goods store owner, he founded the private equity firm Blackstone with fellow billionaire Peter Peterson in 1985. He has $ 37.4 billion.

Your company: Blackstone became the world’s largest acquisition firm, with $ 684 billion in assets.

20. Len Blavatnik
With $ 36.7 billion under his belt, Len Blavatnik he is the 20th richest American. He was born in Ukraine and raised north of Moscow, however, he later emigrated to the United States in 1978 to go to school; studied computer science at Columbia University.

He made a fortune selling his stake in Russian oil company TNK-BP for $ 7 billion in 2013. After buying Warner Music in 2011 for $ 3.3 billion, he took the company public in June 2020, quadrupling the value.