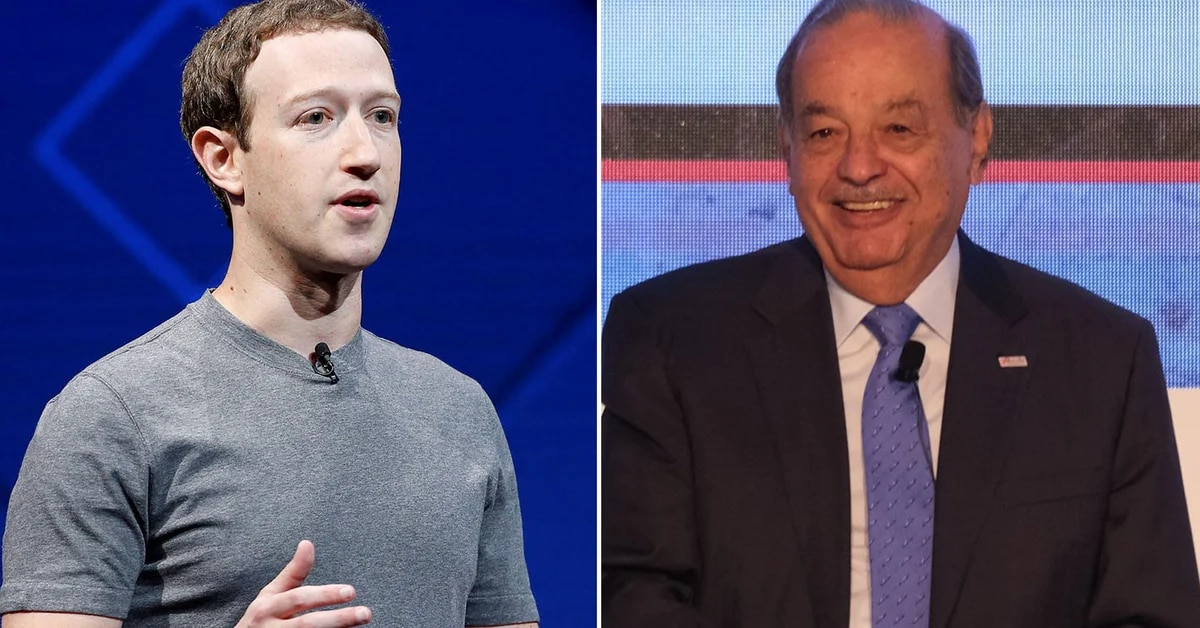 Carlos Slim is the person with the most money in Mexico, while Zuckerberg, until a few weeks ago, was among the 5 wealthiest people in the world.

Charles Slim He is considered the person with the most money in Mexico, since the businessman owns some of the most important companies in Mexico such as Grupo Carso, Telmex and América Móvil, among other. That is why, in addition, Slim is also found among the wealthiest people in the world.

According to the page Forbes Billionairesin real time, Slim is in position 13 among the people with more money worldwide, with a fortune of USD 79 thousand 700 million. This list is led by other important businessmen from various countries. In the first place, the owner of Tesla and Space X Elon Musk, with a fortune of USD 223 billion and second to Jeff Bezos, business owner amazonboth from the United States, followed by the French Bernard Arnault, who is estimated to have a fortune of USD 165.2 billion.

A few weeks ago, among those first places also appeared the businessman Mark Zuckerberg, who owns the company Goalwhich in turn, owns social networks Facebook, Instagram and WhatsApp; however, in early February, his fortune took a hit and dropped considerably. And it is that in a single day, Zuckerberg lost $31 billion, one of the biggest one-day drops in history, second only to a $35 billion loss from Elon Musk in November.

Due to these losses of the American businessman, currently the page of Forbes places him in position 15, with a fortune of USD 71.4 billion. This positions Slim two rungs above him, and with a greater fortune for USD 8.3 billion.

The businessman Carlos Slim owns important companies in Mexico, and his fortune places him in position 13 among the richest in the world. PHOTO: GRACIELA LÓPEZ /CUARTOSCURO.COM

As already mentioned, at the beginning of February, the fortune of the owner of Goal He had a severe fall, from which he has not been able to fully recover. It was on February 3 that the company suffered the worst drop in its share price since it was founded. These came to collapse up to 26% in the NYSE, after reporting disappointing results in what was a roughly $200 billion drop in capitalization for Zuckerberg’s company.

Among the many reasons that led to the drastic drop in Meta’s shares, the main one was the strong competition that the rapid rise of other platforms such as TikTok and its short video format.

Zuckerberg himself acknowledged that users now have “a lot of choice about how they want to spend their time, plus apps like TikTok are growing rapidly.”

The Meta CEO He asked investors for patience as Facebook’s reel product surges.

Last February, Zuckerberg had a severe drop in the value of Meta shares. REUTERS/Erin Scott

The Mexican businessman, former member of the program Shark Tank Mexico and son-in-law of the businessman Carlos Slim, Arturo Elias Ayub uploaded a video to your account Instagram explaining in his own words what caused the fall in the price of the Meta Stock Exchange. “Meta, which is called, lowered its price in the Stock Market 26%, Do you know how much it means in money that the market value of Facebook or Meta dropped? That means it went down $230 billion, that is, from yesterday to today, Facebook okay USD 230 billion less of what it was worth the day before yesterday, imagine that, that is, just to give you an idea (…) with that you can buy maybe 90% of the companies that are listed on the Mexican Stock Exchange”, explains Ayub in the video.

The businessman also mentions that every quarter the companies report their operations, numbers, losses, etc., “but here it was not a matter of Facebook lost money, here it was an issue that Facebook lost a lot of users, do you know how many users Facebook lost in the last quarter of 2021, which is the one they just reported? One million daily users (…) In other words, in three months it lost 90 million users“, it says.

He points out that the vast majority of these users are between 15 and 25 years old, that is, those who are going to stay longer because they are young. “To that add who do you think won them? well my dear tiktokerswon them TikTokwho won 650 thousand daily users during the last quarter of last year”, concludes the businessman.

How many millions has Carlos Slim invested to combat the COVID-19 pandemic?
Carlos Slim: in what sports has the Mexican tycoon invested money
What are the hobbies that Germán Larrea has, the second richest person in Mexico

Carlos Slim or Mark Zuckerberg: who has the greatest fortune, the Mexican tycoon or the owner of Facebook

'It's a threat to his empire': Stock investors bet on Twitter in Elon Musk trial
Twitter CEO: Elon Musk will not join Twitter's board
Elon Musk sells the equivalent of $ 1.1 billion in Tesla stock - KVIA