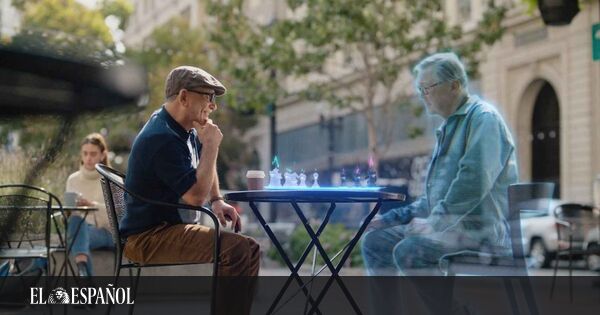 Unexpectedly, the day has come when some parents have to threaten their teenage children with punishment if they don’t go out to party. Just the opposite of what would seem logical.

There has been a lot of talk in recent months about that compulsive form of youthful relationship that is the bottle, but not so much about Technological self-absorption, isolation and fear of life that is permeating the mentality of many Spanish adolescents. An attitude that leads to preferring to stay at home rather than being exposed to face-to-face contact.

It is not an anecdote. It is a generational explosion of withdrawal from the most human thing that exists: the relationship with others. And the cause is not the pandemic (which has exacerbated the problem, but has not created it), but rather has to do with new ways of communicating, seeing reality, and considering the social relationships among those who have lived their childhood. surrounded by technologies and permanent warnings of the dangers of the outside world. A cocktail (technology plus overprotection) whose bitter taste many families begin to taste.

Learning to treat and treating yourself is no small matter: without that culture, there is no longer the capacity for dialogue. Nor to disagree without aggressiveness with those with whom we do not agree. It is not known to distinguish how to behave with others based on their role (the emails that university professors receive are, sometimes, for framing). Nor how to modulate affection and sexuality in couple relationships (whose brutality has deserotized love).

The truth is that the inability to recognize that the other is not an enemy to defeat, but someone with whom to learn what it means to live has become more acute. And learning to live can only be done in one way: by living. And living is a risk that must be assumed.

In short, it has spread a culture of fear in the face of reality and existential disenchantment that has led many to loneliness, coldness and a commitment to what can hurt them the least: from preferring to be with a pet (which avoids betrayals, complications, failures), to hiding behind the virtual account of our own story that is Instagram. Everything responds to the same process.

The technological era in which we find ourselves offers great advantages, but, like all times, not few risks. The greatest, not to forge a routine of disagreements that allow us not to succumb to the first changes. The truth is that there is no maturity without managing disappointment. And that is being lost. Serenity breaks before the first failure (which always ends up coming). And the therapies and pills appear.

The information society has also spread a fear that parents have assumed as normal. Distrust has become commonplace in the education of our children.

How not to warn of sexual abuse, of the risks of trusting strangers, of never being alone with an adult? And, already as teenagers, of the brutal group rapes, of the drugs they can put in a drink, of the predators that hide behind attractive avatars, of the couples who control mobile phones, of the deceptions to send videos in which it can fall? How can we not protect our people from others?

“A parallel reality that supposes a new possibility of being a person, and being so by denying that we are body and we are touch and heat and caresses”

And yet, the evidence that we have all experienced in our lives: the surprise of an unexpected encounter; the opportunities that dealing with someone you didn’t know has offered us; the happiness of giving the possibility of friendship in whom you did not expect.

In addition, the world that awaits those who reach the age of life beyond home does not make things easier. Children (it does not matter whether they are boys or girls) reach adolescence with the fear that any mistake they make could be recorded and broadcast in just a few seconds (and who has not made mistakes when they are young?). That any word they say can be classified as offensive (and end up marked as todoloquesenosocurrafobicos). For a spontaneous gesture to be elevated to the category of dangerous for someone. To not comply with the entire encyclopedia of behavioral norms that are required to be accepted among the pure of the new society. The risk is too high. Staying home, a salvation.

Mark Zuckerberg has presented his new project: the metaverse. An environment that saves many of these difficulties. A parallel reality that supposes a new possibility of being a person, and to be one by denying the ultimate evidence of the human: that we are body and we are touch and heat and caresses and cares and hugs and glances and kisses. All that is abolished.

The virtual world builds a space of masks. A dance in the distance. And it may be fine, of course, as well as being able to communicate with someone who lives elsewhere. But its counterpart is to make the reverse journey: instead of bringing the far closer, move the near away. Transform the direct into mediated. Nobody doubts the multiple possibilities that virtuality offers, such as social networks.

I think, for example, at an educational level to be able to walk through the Athens of Pericles and see its streets and palaces and meet the Sophists in the agora and listen to them in classical Greek and better understand a world that no longer exists.

“Human love is between people, and people are in an integrity that does not fluctuate according to the desires of the moment offered by the virtual world”

But that’s not the problem. The problem is how its use affects us when interpreting reality and ourselves.

The human (starting with relationships) is increasingly at stake: what is a child? And for whom did he conceive it in a surrogacy? And does someone (a cyborg) with more and more technology in their body stop being a person? And a genetically modified man? Can there be human love if there never is nor will there ever be a real encounter that certifies it?

The Christian idea of ​​the incarnation affects precisely this question. A God who is love cannot be so in the distance: he needs a body that makes him present. You never love an idea, you don’t love a virtuality, no matter how much someone is behind it. Because ideas are nothing more than reductions: what I think the other is, what I imagine it can become, what I project into it.

But for the other to be a you, as the Jewish philosopher already wrote Martin Buber a hundred years ago, we needed to overcome our will to limit it, to turn it into an object, even if it is the most precious object of our thought. And that is only possible from the body, from the totality.

Human love is between people, and people are in an integrity that does not fluctuate according to the desires of the moment offered by the virtual world (now I am white, now black, now man, now woman, now older, now young), nor by virtual reconstructions that mitigate our imperfections.

The world is diluted in bits and algorithms, it becomes opaque to its true nature. But human beings are not made for the absence of reality. Our nature is affection. And there is nothing that fulfills it more than contact. We will never eat data. We will never drink zeros and ones. We will never love concepts. Our essence is another. Allowing isolation is fostering oblivion: the end of the human condition, the reason we were born. We are made to love. And love requires going out to meet, not staying fearful on the couch.

*** Guillermo Gómez-Ferrer Lozano is a doctor in Moral and Political Philosophy and a professor at the Catholic University of Valencia. He is the author of the book Religious intelligence.

Can love exist in Zuckerberg’s metaverse?