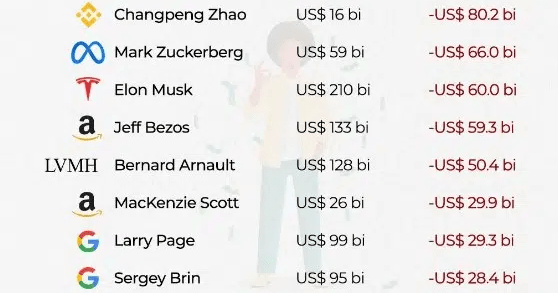 The CEO of Binance, known only as “CZ”, is the billionaire who records the world’s largest loss in 2022. With the cryptocurrency crashs, many ex-rich left their millions and bitter losses on their positions.

Elon Muskstill the richest man in the world, is another of those who registers a brutal drop in his wealth, even with his companies having support in the United States.

This shows that both the cryptocurrency market and the traditional financial market, of companies listed on stock exchanges, are not going through a good time in 2022, after the central banks reduce the printing of money.

Binance CEO is the world’s most lost billionaire in 2022, here’s how much

The first half of 2022 has certainly shown equity and cryptocurrency risk investors that the timing is far from ideal, and it is essential to analyze the scenario calmly and carefully, as the signs are alarming.

With high inflation around the world, the possible installation of one of the worst recessions in the world has been seen, with the poorest population already feeling the effects in their daily lives. It is enough to go to the supermarket and the concept of inflation is learned in practice.

But if the situation of the poorest is difficult, the great billionaires are also going through a time of difficulties in their assets. Using data from Bloomberg, FinDocs, a Brazilian financial education company, analyzed the extent of the capital devaluation of the wealthiest since January.

In the survey, the highlight went to Binance CEO “CZ”, who after losing $80 billion since January, is the losingest billionaire in the world today. This fall in Chinese equities is mainly due to the fall in cryptocurrencies, since Bitcoin today costs less than 20,000 dollars.

Second, the Founder and CEO of Meta (ex-Facebook), mark zuckerbergloses $66 billion, showing that their companies are also under pressure.

To close the “podium” of multi-million dollar losses is none other than Elon Musk, CEO of Tesla, SpaceX and other companies, enthusiast of Bitcoin Y Dogecoinwho records a loss of US$ 60 billion in the first six months of the year.

Executives at Amazon and Google are also feeling the effects

The survey by the Brazilian company also shows executives like Jeff Bezos, currently the third-richest man, on the list, with an estimated loss of $59.3 billion.

The current president of LVMH, Bernard Arnault, is the second richest man in the world, but he has not escaped losing 50,000 million dollars in recent months.

The situation shows that the biggest businessman in the cryptocurrency sector today, who was once considered the richest Chinese in the world, is under pressure. However, in a recent speech, CZ said she doesn’t have as much money as everyone thinks.

Binance CEO is the world’s biggest loss billionaire in 2022