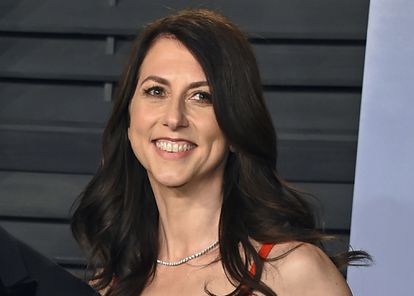 MacKenzie Scott’s best-known photograph and her second husband, science teacher Dan Jewett, shows the couple embracing and smiling for the camera. They appear together near a lake in a lush emerald green forest. It is a place for mountaineering, one of the favorite activities for the people of Seattle, the city where the couple met. Scott’s second marriage is history. One of the richest women in the world and ex-wife of Jeff Bezos has filed for divorce less than two years after announcing to the world that together they would donate a fortune of more than 50,000 million dollars to various non-profit organizations.

Scott, 52, has since donated $12 billion to hundreds of projects and social causes. This has placed his current fortune at around $27.8 billion, according to estimates from Bloomberg. In March 2021, Jewett joined The Giving Pledge (The promise to give), a campaign where billionaires promise to inherit their fortunes in life. “It is strange to write a letter indicating that I will give away most of my wealth, as I never thought I would have the wealth to say such a thing,” Jewett wrote at the time. Her union with Scott, who had divorced Bezos in 2019 after 25 years of marriage, was revealed by The Wall Street Journal in March 2021. Scott obtained 4% of Amazon shares with the separation.

The end of this second marriage will be less complicated. And media, of course. Scott filed for divorce Monday in family court in King County, Washington state, where Seattle is located. Jewett has not opposed the dissolution of the link, according to New York Times. The couple was married under the regime of separation of property. Jewett’s trail has been erased from The Giving Pledge page.

Scott, a mother of four, met Jewett at the school where her three teenage children attend. It is a reputed private institute in Seattle. The children attended classes there at least since 2019, when Bezos and his then-wife attended school events together. The science teacher has a long experience in schools. Before coming to Seattle, he had taught science at another school in Pennsylvania. His students remember him as a “friendly, passionate and energetic” figure. Bezos had also referred to him in very good terms. “Dan is a great guy,” the Amazon founder said a couple of years ago. After marrying Scott in California, Jewett moved with her wife and her four children to a house in the city where the tech giant is headquartered.

Nothing seems to alter, for the moment, Scott’s plans to continue donating hundreds of millions of dollars. His name appears linked week after week to donations and gifts he makes to various organizations around the country that he selects with the help of a group of advisers, who facilitate the task of reducing one of the largest fortunes in the United States. .

Just this week, for example, he donated two Beverly Hills mansions, valued at about $55 million, to a California community foundation. This, in turn, intends to sell the properties and use the money for educational scholarships and support to combat the homeless crisis in the city.

In May, Big Brothers Big Sisters of America received the largest donation in its history. This was done, of course, by Jewett’s now ex-wife. The rumors that there were problems with the marriage began a few months ago, when the beneficiary organizations gave thanks for the gifts received only to her and not to the couple, as was done last year. In June 2021, Scott distributed more than 2,700 million dollars to 238 organizations of all the world.

Who are the billionaires who became richest in 2021 and how to explain the incredible increase in th...
Melinda French Gates speaks for the first time about her divorce from Bill Gates: "I couldn't trust ...
Mark Zuckerberg Demonstrated Meta's VR Headset Prototypes - Reseller