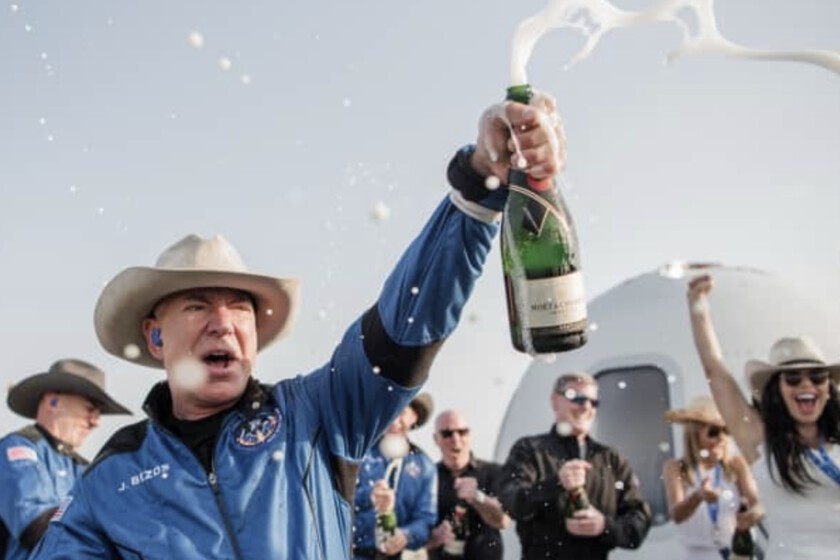 Bezos Y Branson they smiled and uncorked champagne. Both had managed to fulfill a dream: to travel to space – at least for a few minutes – and start a controversial era of space tourism.

It was already controversial for being only accessible to billionaires, but now we know something else that is not exactly to uncork champagne: every space flight emits as much carbon dioxide as a billion people throughout their lives. Space exploration makes these emissions offset. Does space tourism do it? Uhm.

The data appears in the 2022 World Inequality Report, a document that focuses on show diverse inequalities in the world with hard data and that one dedicates one to that new era of space tourism initiated by Blue Origin and Virgin Galactic.

According to this report, “the most striking illustration of the extreme pollution associated with wealth inequality in recent years be the development of space travel“.

The study makes no specific reference to Bezos or Branson, but the mention of that flight duration of 11 minutes makes it indirectly pointed to those tourist flights. As they point out in Gizmodo, the ships used by Blue Origin use fuel that does not emit carbon dioxide as such, but that fuel is produced with a process that does produce large emissions.

Obviously the cost in carbon emissions is also as high for any other space mission. Elon Musk and his company SpaceX do not stop launching rockets —In large part for the deployment of its Starlink network— and that platform will ultimately be a means of obtaining enormous income for this entrepreneur. At least, yes, it will raise an interesting option when connecting to the internet, but even so, suspicions are inevitable.

The thing it is even more serious in the case of this new era of space tourism started by Bezos and Branson, and certainly reopens a debate that is not new: that of this inequality and the cost that these tourist experiences have for the rest of humanity.

In fact, there have already been proposals to impose a special tax for these types of missions. Earl Blumenauer, a US House Representative from Oregon, posed the creation of a law and that new tax that it would forcefully tax anyone who traveled to space “for purposes other than scientific research.”. Doesn’t seem like a bad idea at all.

Bezos and Branson’s space tourism is very expensive: each flight emits as much CO2 as a whole generation in its entire life