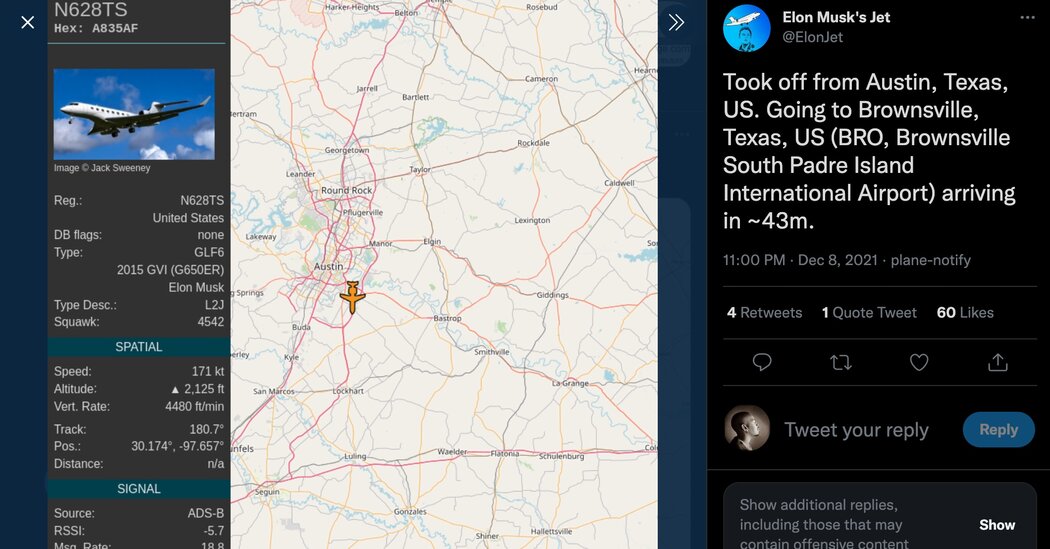 Sweeney said he was falling asleep when his Android phone buzzed at 12:19 a.m. on November 30. He had been in his bedroom, where several promotional posters for SpaceX, Musk’s space exploration company, hung on the wall above his bed, according to a Photography shared on Sweeney’s personal Twitter account.

Sweeney made a counteroffer to Musk, according to screenshots from the exchange, telling him that he would leave the account if Musk raised the offer to $50,000. He said he was also willing to accept a Tesla Model 3, an electric car that costs more than $38,000, adding that he was joking.

In the exchange, Sweeney was asked how he had been able to track down Musk. He explained that he had obtained the data from the plane’s transponder. When told that paying him to shut down the Twitter account didn’t seem like a good idea, Sweeney had another proposition: How about an internship?

The exchange, which went on for more than a month, fell silent after January 23.

Sweeney downplayed privacy and security issues associated with his tracking account of Musk, which has more than 305,000 followers.

“It’s a private plane, so it goes directly from the plane to the car,” he said, adding that he has long had a fascination with tracking planes. “I don’t think it’s that big of a concern. Some people are just interested in seeing where it goes.”

Sweeney said he got the data for his aircraft tracking accounts from ADS-B Exchange, which describes itself on its website as the world’s largest source of unfiltered flight data.

Dan Streufert, founder of ADSBexchange.com LLC, said in an email Wednesday that anyone with basic electronics equipment could get signals from planes that broadcast their location. Information is also available by listening to air traffic controllers, he added.

A teenager was tracking the whereabouts of Elon Musk’s jet and tweeting about it. Then came a direct message