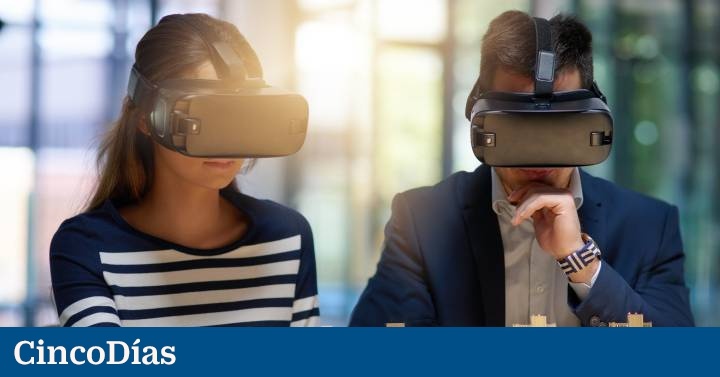 In Decentraland, a virtual city with its own cryptocurrency, the mana, users walk in their avatars through squares, shopping centers or casinos where the dealers are real-life employees who are paid for their work. The platform, based on blockchain, was launched in 2017 by Argentines Esteban Ordano and Ari Meillich, and has not stopped growing since then. Even Sotheby’s, one of the most prestigious auction houses on the planet, has built a replica of its London galleries there, and last June the digital real estate investment firm Republic Realm disbursed the historic figure of 770,000 euros for a set of virtual plots.

Decentreland is a small-scale sample –other examples are Sandbox, Fornite or Second Life– of the metaverse, that parallel world that, if successfully built, will change our societies as profoundly as the internet has. Or more, because of its potential implications, many of them still unpredictable.

But what exactly is the metaverse? The term, coined by writer Neal Stephenson in his 1992 novel Snow Crasher, could be defined as a network of three-dimensional virtual environments that, interconnected with each other, give rise to an always active superstructure, with its own economy, and where millions of people can interact with each other and do everything or almost everything they do in the world. real world. At least that’s the idea.

“The metaverse represents the transcendence of the physical to the virtual world, with a level of interoperability between both worlds completely transparent, so that one can interact with real objects in the real world while interacting with information objects in the virtual world”, says Diego Gutiérrez Pérez, professor in the area of ​​Language and Computer Systems at the University of Zaragoza.

The concept has been floating in the minds of programmers and technologists around the globe for years, but has come to the fore with renewed interest in the wake of a recent interview on the podcast of The Verge in which Facebook CEO Mark Zuckerberg announced that the social network was going to bet on becoming a metaverse company within five years.

Some have questioned the timing of the announcement, hinting that Zuckerberg has wanted to divert attention from his regulatory issues with Washington; but, in any case, it seems that the company’s bet is serious. In fact, it has just launched Horizon Workrooms, a program that allows you to hold virtual meetings in three dimensions through the Oculus Quest 2 glasses.

“I think all these initiatives that we have on Facebook will add up to help build this idea of ​​the metaverse,” Zuckerberg said in the interview. “Facebook knows that it has to evolve, so the metaverse is its big bet”, Gutiérrez emphasizes. The financial incentives to do so are not trivial. According to a report by Bloomberg Intelligence, the metaverse currently represents a business opportunity of 500,000 million dollars, a figure that will rise to 800,000 million in 2024 and 2.5 trillion in 2030. According to another report by the consulting firm PwC, the The virtual reality and augmented reality sector (VR and AR, respectively) will have an impact on the creation of 24 million jobs globally by 2030.

The new environment will create 24 million jobs in the next 10 years, according to PwC

But what should the digital cosmos look like and who should control it? This is, perhaps, the aspect that arouses the most passions among its promoters, some of whom pose the question as a debate about the very soul of the metaverse. For the director of technology and founder of Decentraland, Esteban Ordano, the metaverse should function like the internet, without there being a single actor behind pulling the strings. “This should be an open consortium to avoid the concentration of power in the hands of some companies. If not, we would have all the data protection problems that we are trying to solve ”, he says.

That is why Decentraland operates as a decentralized state, in which users can create and monetize their own content and applications. “There are community members who are running [administrando] some of the servers. If we want to close the company and turn off our servers, the virtual world continues. It’s the premise, ”Ordano says.

But perhaps the most active in defending the openness of the future metaverse has been Tim Sweeney, the founder of Epic Games, the company behind the popular virtual reality video game Fortnite and the revolutionary game engine Unreal Engine. “Everyone, from the individual user to the big developers, should participate on an equal footing. This is the only way to achieve a metaverse with a free and lasting economy, ”Sweeney said in a recent VentureBeat interview. The characteristics of the metaverse will depend in part on the prevailing business model, he said.

To be successful, it must be novel and outperform the real world.

Will big companies control it or will it have an open economy based on technologies like blockchain? Mark Zuckerberg himself acknowledged in his conversation with The Verge that, in order to build this virtual world, it will require the participation of many companies and programmers. However, the model top-down (from top to bottom) of Facebook makes some experts doubt the vision of the metaverse promoted by its CEO.

How long will it take to arrive?

Currently there are numerous platforms or video games that offer metaverse-type experiences, which allow you to peek into the future to come. Last year, for example, rapper Travis Scott sang in Fortnite through his avatar for 12 million players; last August the singer Ariana Grande did the same. Another example: this year the Spanish collector Pablo Rodríguez-Frai, a landowner from Decentraland, sold the first NFT (token non-expendable) millionaire (5.5 million euros) in history for a 10-second video of the famous digital artist Beeple (NFTs are a kind of certificates of ownership of virtual or physical assets, based on blockchain, which have become popular in the art and real estate markets).

Technology has made great strides in recent years, with the emergence of 5G and cryptocurrencies, but there is still a long way to go to find a setting like Oasis in the movie Ready Player Oneby Steven Spielberg. “This is not going to happen overnight; It will do so progressively. There will be more and more apps of augmented reality on mobiles, there will be more and more virtual reality environments that are a little better and, almost without our realizing it, as is often the case, there will come a time when we will look back and realize how much we have advanced ”, considers Gutiérrez Pérez, from the University of Zaragoza.

But what is missing? “On the one hand, there are important technological aspects to be solved; on the other, there is still much to know in the perceptual and cognitive part, to understand how the human being would function in these virtual environments ”, he explains. A third aspect is that of content: “All this technology that we want to develop will be of no use if there is no content that interests people.” In the same sense, Sweeney, from Epic Games, spoke in the interview with VentureBeat: “The metaverse will have to overcome the critical challenge of providing a new experience of some kind that is better than anything else that competes for people’s attention,” he said.

There are other big questions that are left open around the idea of ​​the metaverse. One of them is related to the issue of governance. “Who will regulate this metaverse so that we are protected, so that our data is protected, so that when we are interacting with someone we know what is real and not artificial intelligence?”, Asks José Delgado Periñán, director of ARAN Art Network and coordinator of the Master’s degree in Extended Reality: Virtual, Augmented and Mixed Reality from the International University of La Rioja (UNIR).

“Should it be a crime to kill someone in a virtual environment?”, Asks Enrique Dans, professor of Innovation at IE University and author of the book. Living in the future. And what will happen to a person who is better in the virtual world than in the real one? To what extent are we not building a substitute for reality that could generate pathologies? ”, Says the expert. “The metaverse is part of the technological agenda, so the sooner we all row to get it on the right track and give it a social use, the better. Technoethics is essential in this sense ”, says Delgado Periñán.

Persistence. Unlike the current internet, where everything ends or restarts or simply remains paused when users disconnect, the metaverse – considered by some as the next stage of the internet, its evolved version – will never stop: it will always be active, constantly functioning, as it happens in the real world. So what users build on it will stay there.

Interoperability. Users will be able to effortlessly transition from one virtual environment to another. The metaverse will function as a superstructure where the different worlds will be united – like planets and galaxies – by a great spatial architecture. The digital identity of users will be the same in every corner of this parallel universe and their assets will be usable wherever they go.

Parallel economy. The digital cosmos will have its own economy, based on cryptocurrencies and tokens non-expendable, and in the technology of the blockchain. In it, both companies and individuals will be able to buy, sell, invest and create value. It remains to be seen if it will have an open character or if a model will be imposed top-down, in which large companies would have control as is already the case with the main social networks.

Interactivity and access. In the metaverse, users will be able to do many of the things they do in the analog world, and others that they don’t. Each environment will have its own physical laws, designed by a programmer or content creator. Users will be able to interact with each other and with the environment, in real time. As it already happens in Fortnite, it can be accessed from multiple devices or operating systems.