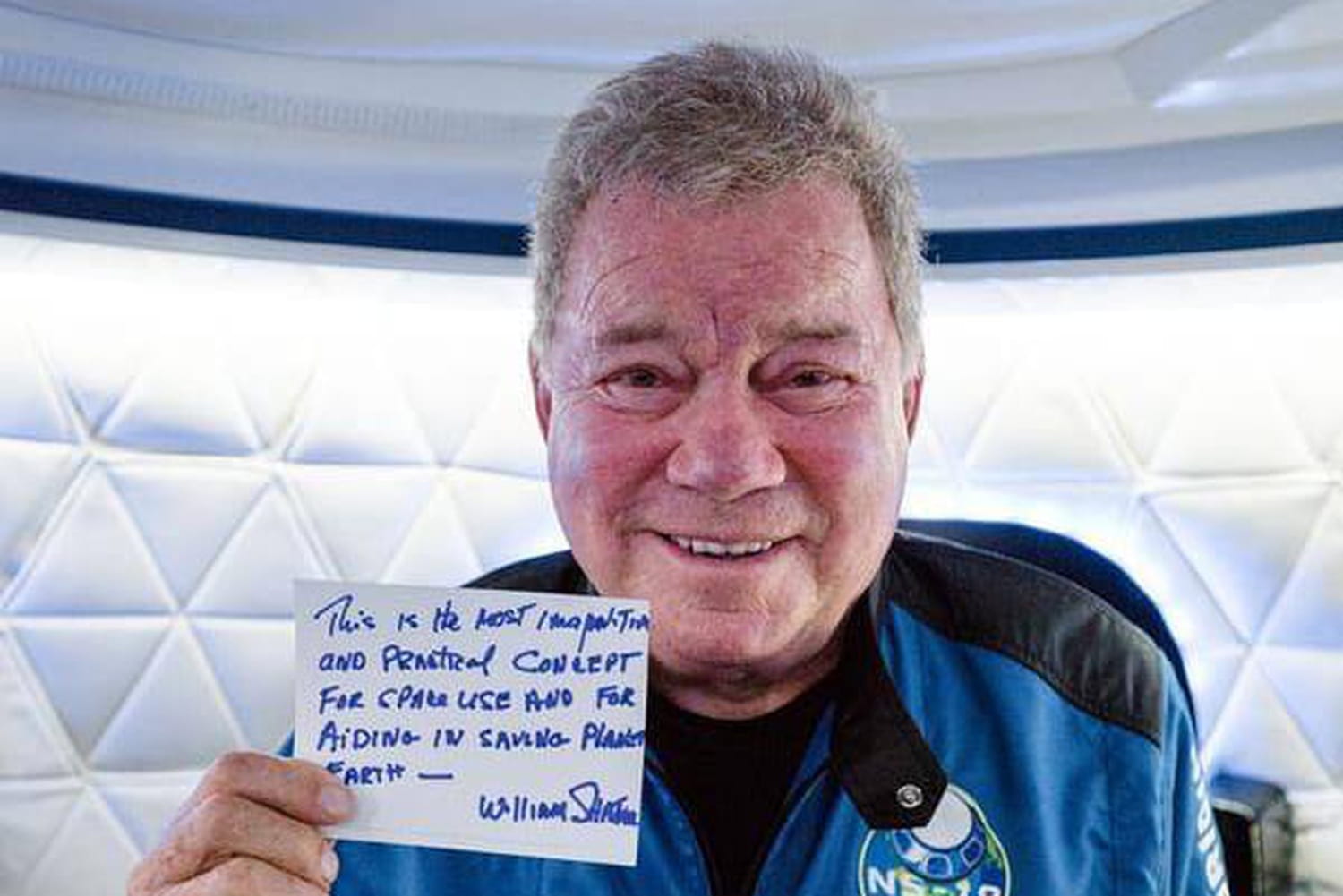 [Mis à jour le 13 octobre 2021 à 17h35] It’s a dream come true for William Shatner. The one who played Captain Kirk in Star Trek flew into space this Wednesday, October 13, 2021. Aged 90, he participated in the Blue Origin New Shepard NS-18 mission, which took off from Texas at 4:49 p.m. (French time). The flight was a real success for the team, with the actor coming out all smiles and delighted with his experience.

Note that this is the second manned launch of the New Shepard rocket after a first high-profile launch in which was Jeff Bezos, the CEO of Amazon leading the quest for space. Bezos was also present at the launch of the rocket of William Shatner and his three other co-astronauts. We saw him say a few words to the passengers before shaking their hands and congratulating them. Below, relive the flight in space in which William Shatner participated.

Absolutely perfect flight for William Shatner and the passengers of flight NS-18 who landed shortly before 5:00 PM. “I’ve never experienced anything like this,” we heard the actor known for the role of James Tiberius Kirk, famous commander of the USS Enterprise in the science-fiction series Star Trek. With a total flight time of approximately 9 minutes, the passengers spent a total of 3 minutes in space at an altitude of over 100 kilometers. Before taking off for space, William Shatner told Comic-Con in New York that he was “terrified” of going “where no man has ever been.” At 90, he will become the oldest person to ever travel to space. “I don’t want to be known as the oldest man in space! I’m Captain Kirk!”

Born March 22, 1931 in Montreal, William Shatner is a key player in the “Star Trek” saga. During his career, the actor officiates especially in series, in particular science fiction and detective. Knowing a slump, he resumed his career, thanks to the series that made him discover. However, he is not confined to the profession of actor, and has also turned to music and writing.

William Shatner is the son of Joseph and Anne Shatner. He has two sisters: Joy and Farla. They are brought up in conservative Judaism. His grandparents were Jewish immigrants, so they anglicize their surname “Schattner” to “Schatner”. It was during a Shakespearean performance at the Stratford Festival in Canada that he stood out.

William Shatner began his television career in 1954 in “Howdy Doody” and in the cinema in 1958 in “The Brothers Karamazov” by Richard Brooks. Then he turns more to the series with “Alfred Hitchcock presents”, “The Fourth Dimension”, “Beyond the real” and “The Fugitive”.

In 1965 the first pilot of the science fiction series “Star Trek” was shot. In this version, the captain of theEnterprise His name is Christopher Pike and he is played by Jeffrey Hunter. For the second pilot, the latter refuses to play this role again. It is none other than William Shatner who obtains the role, whose name is changed to “Captain James T. Kirk”. This series chronicles the adventures of the crew of the Enterprise NCC-1701 spacecraft in the twenty-third century, whose purpose is to explore the galaxy. The series, broadcast from 1966 to 1969, was an international success and Shatner obtained a certain notoriety thanks to it. From fanzines and derivative products are created to delight fans, called “trekkies” or “trekkers”.

Often associated with his character in “Star Trek”, William Shatner experiences a desert crossing at the end of the series in 1969. He only makes appearances in series, such as “Hawaii State Police”, “The Man worth three billion “and”ColumboIn the latter, he actually appears twice, once in Season 6 in 1976 and again in Season 13 in 1993, playing a criminal.

In 1979, William Shatner’s career was given a new lease of life thanks to “Star Trek, the film”, derived from the television series. The actor once again plays Captain Kirk in the first six films and co-wrote and directed the fifth. He also plays in the theater and on television, by illustrating himself for example in the series “Hooker”, from 1982 to 1986, then in the cinema with “Miss FBI: divinely armed” alongside Sandra Bullock, in 2005. He won two Emmy Awards and a Golden Globe thanks to his recurring role in the series “Boston Justice” by David Edward Kelley, from 2004 to 2007.

William Shatner entered music in 1968 with his first album “The Transformed Man”, recorded at Universal. In 2004, he released a new album, entitled “Has been”, recorded by Sony. This second album offers several collaborations, notably with Joe Jackson and Aimee Mann but also the producer Ben Folds.

In 2019, at the age of 88, William Shatner is not ready to retire, as he makes an appearance in the series “The Big Bang Theory”, playing his own role. He had previously turned down a role in the series in 2016, believing that he did not want to play “an exaggerated version of himself” and had therefore invited the production to find him a better role. This is how for the twelfth and final season of the series, he makes his appearance, alongside other guests: actors Wil Wheaton and Joe Manganiello, director Kevin Smith and basketball player Kareem Abdul-Jabbar. Everyone will come together around a game of Dungeons & Dragons, to the delight of Sheldon, Leonard and their compatriots.

William Shatner has been married four times. A first time from 1956 to 1969, with actress Gloria Rand, with whom he had three daughters: Leslie, Lisabeth and Melanie. A second time from 1973 to 1996, with actress Marcy Lafferty, a third time with actress Nerine Kidd, from 1997 to 1999, then a fourth time in 2001 with a horse trainer named Elisabeth Martin. In December 2019, we learned that he had filed for divorce, ending an 18-year relationship.

Terror in the central hospital