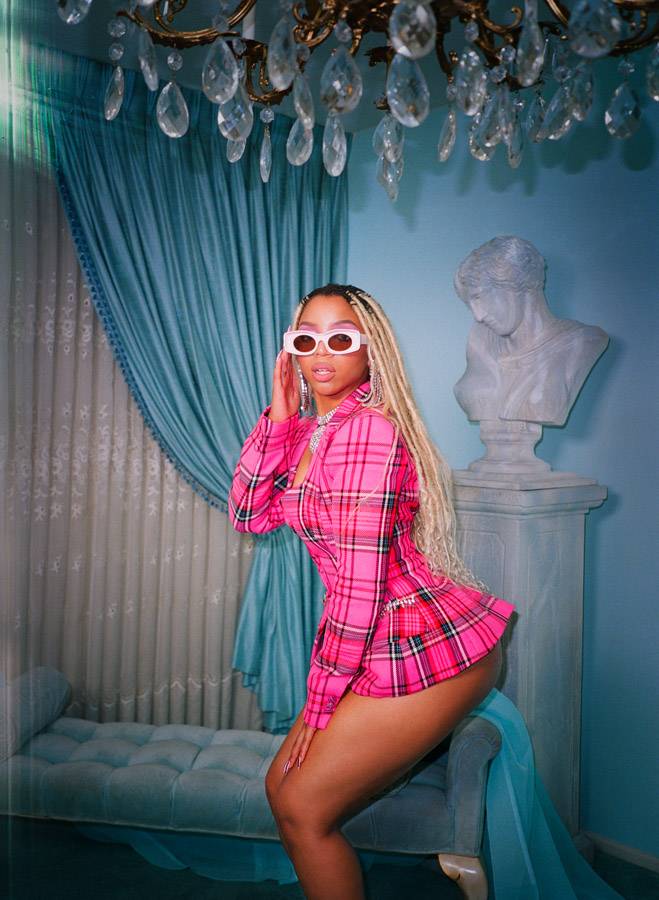 If the sisters Chlöe and Halle Bailey made themselves known in 2013 thanks to their covers on YouTube, seducing Beyoncé in the wake, the duo of singers then made a place of choice in the middle thanks to their precocious talent and their voices. exceptional. Today, after several musical projects for two, Chlöe, then twenty-two years old, takes off and embarks on a solo career. Meet a young artist adored on social networks, and protected by Queen B in person, who released her very first single, Have Mercy, September 10.

During our meeting with Chlöe, the young woman never ceases to stress how grateful she is for everything that happens to her. She does this in a soft and calm tone, appearing almost vulnerable, the opposite of the strong and self-confident image she sends back on social media and during her performances. Because despite her almost four million subscribers on Instagram, her special relationship with Beyoncé and her flourishing musical career with her sister Halle, Chlöe remains a great lover of music, who saw her life be turned upside down eight years ago. On July 1, 1998, Chlöe Bailey was born in Atlanta, Georgia, then raised to her sister Halle, born two years later, into a loving family and warm home, where music reigns supreme. “Our parents made us listen to music all the time at home. We grew up with this love for music. We listened to Alicia Keys, Beyoncé, Nina Simone or even Toni Braxton… Only artists who also made me want to make it my job “, says Chlöe.

From an early age, the two sisters, very accomplices, then understood that they knew how to sing and we very quickly had the idea of ​​exhibiting their talent. They then post cover videos on Youtube, under the name of Chloe x Halle and cover songs from their idols: Beyoncé, Alicia Keys, Rihanna or John Legend. At the end of 2013, when the two were respectively fifteen and thirteen, they released a cover of the single. Pretty Hurts by Queen B, which goes viral and has more than twelve million views, so much so that Beyoncé herself posts the video on her social networks. A first consecration for the duo, which will then be signed with Parkwood Entertainment, the label created by Queen B, in 2015. “Beyoncé gave us a lot of advice on the music business. She told us not to listen to what people say, be it positive or negative, because it can affect us deeply. She also told us to stay. true to who we really are “.

Very quickly, everything is linked, Chlöe and Halle unveil their first EP, Sugar Symphony, in 2016, then opened for Beyoncé during the European leg of her tour “The Formation World Tour”, and even participated in a project launched by Michelle Obama: This Is for My Girls, a song created as part of the “Let Girls Learn” project – aimed at promoting the education of young girls in difficulty – initiated by the first lady of the time. Then Chloe x Halle unveil a new EP in 2017, The Two of Us, a mixtape in 2018, The Kids Are Alright, and even an album last year, titled Ungodly Hour. Thanks to all these musical endeavors, the group of singers really stood out and wowed millions of people, especially on social media, and even received a total of five Grammy nominations. Today, although Chlöe “loves to make music with her sister”, which she even considers her “best friend”, the young artist decided to go solo. “Despite our career as a duo, I’ve always made music on my own. I already have a lot of songs ready that no one has ever heard.”

On September 10, the American unveiled his very first solo single, Have Mercy, a hard-hitting and vibrant track, which today counts a total of twenty-three million listenings. Moreover, Chlöe did not do things by halves, since she also released the clip of the song a few days later, clip which also caused a lot of reaction. While some fans of the duo still saw her as a child devoid of any sex appeal or even a trained body, the singer showed herself like the woman she is today, twerking in an ultra sexy outfit. in the video, which drew comments that were sometimes derogatory and even disgusting. “What the haters said touched me a lot and it still touches me. People are not allowed to tell a woman how to behave or how to dress. I am just happy to be able to help d other women to love and be confident. People are not allowed to sexualize you and comment on your body. This is a real issue for women’s confidence. “. A response to these “haters” that she published on her social networks, like a real cry from the heart against this omnipresent sexualization of female artists, as soon as one of them dares to let glimpse a piece of skin.

Two days after releasing her first single, Chlöe also sang it for the very first time in solo during the VMAs, ensuring an explosive performance worthy of the greatest artists. “The VMAs were insane. I was filled with emotions, and above all very nervous that the public would see me perform like this for the first time, even though it has always been my dream. To perform and dance c my favorite. It’s the best feeling in the world “. While preparing her first album without her sister Halle, who in turn is working on the live-action of The little Mermaid, Chlöe does not intend to part with them, and says that their group will continue despite the new solo part of its professional life. At only twenty-two years old, Chlöe can still boast of having a musical career like very few at her age, even being supported by one of the greatest artists of her time. But the young woman, who concludes our meeting with an air as nostalgic as she is amused, recalls that her goal as an artist “would just make people happy and inspired, like other artists have done for her. And of course, win some Grammys!”.