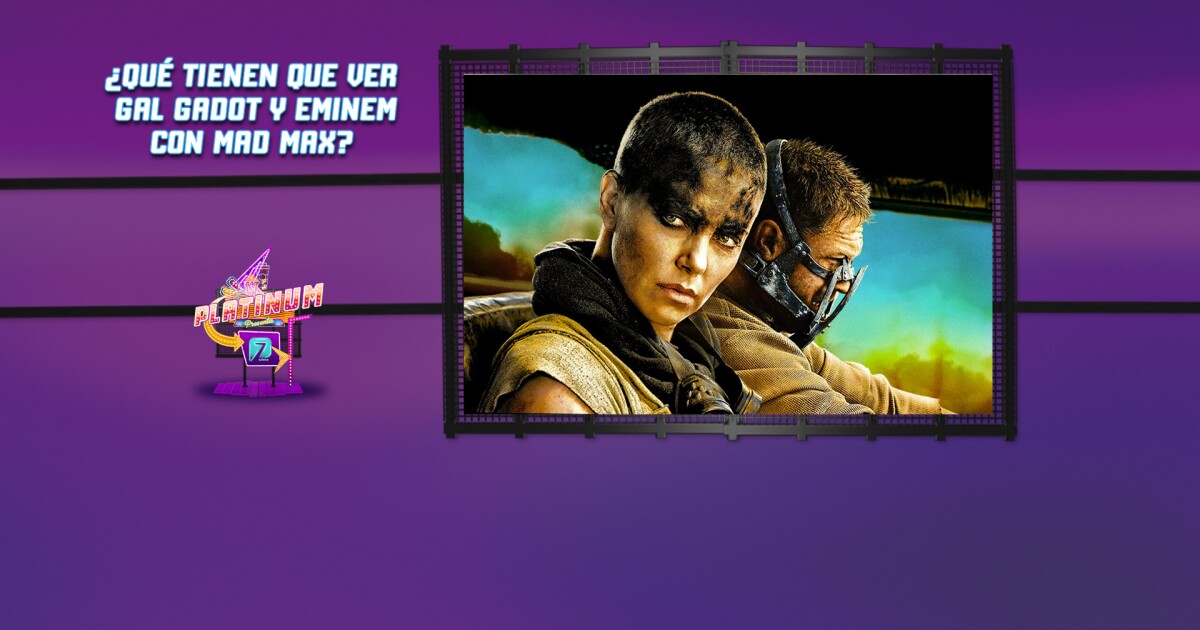 This April 24 the post apocalyptic world will take the Azteca 7 screen with the Mad Max: Fury Road Platinum Premiere; without a doubt, a film full of fury, warriors and a lot of speed that you cannot miss, but before you can enjoy all those emotions, I will tell you a little about two personalities who have a lot to do with this film: Gal Gadot and Eminem.

And you will surely ask yourself, what do they have to do with Mad Max? do they appear in a scene?Is Gal Gadot a warrior? Where in history does Eminem fit in? Well, you will find the answers below.

It turns out that Gal Gadot was considered to give life to none other than ‘Imperator Furiosa‘, yes, this character full of a lot of courage and, above all, bravery.

Although in Mad Max: Fury Road we see the actress Charlize Theron with the role of ‘Imperator Furiosa’, they say that choosing this character was not easy because like Gal Gadot, there were other celebrities who wanted to wear these shoes.

Among them stood out Jessica Chastain, Gugu Mbatha-Raw, Ruth Negga and even Rihanna. However, it was Gal Gadot who drew all the attention in the test that he performed, they even said that “gave an amazing audition”.

As described in the book ‘Blood, sweat and chrome: the wild and true story of Mad Max: Fury Road‘, which collects some anecdotes from the filming of the film,

Gal Gadot
he was impeccable in his casting.

“He took the test and did an incredibly good job; You could already see that he was doing very well. But here’s the thing with Gal: We were testing her not only for Furiosa but also for Wives, and in terms of age, she fell somewhere in the middle.”, commented George Miller, director of Mad Max.

The final decision was that the majestic Charlize Theron should stay with the character, so Gal Gadot, who at that time in her career was not up to the other established figures in Hollywoodwas at a disadvantage and would have passed as a true unknown.

Eminem almost got the role of ‘Max’

Now, in the case of

Eminem
also ran with a fate similar to that of Gal Gadotso this is what they have in common.

That’s right, Eminem, the rapper known for songs like ‘The Real

SlimShady
‘, ‘Without Me’, ‘My Name Is’, among others, was nothing short of being ‘Max’, although it was not easy at all.

tests | Could you belong to the Secret Service? Find out!

Starting with the acting titans he had to measure himself against, among them: Heath Ledger, Michael Fassbender, Jeremy Renner and Armie Hammer. what?

As you may have noticed, it was not easy for Eminem, but it was also not easy for the filmmaker to choose his protagonist, ‘Max’, and in an interview he explained that the rapper caught his attention due to his great work on ‘8 Mile: Street of Illusions’.

“We got in touch with him and he got there because we were going to shoot it in Australia and he just didn’t want to leave his home.Miller shared. Despite everything, it was Tom Hardy who took over the furious character of ‘Max’.

Now that you know what Gal Gadot and Eminem have to do with Mad Max, we invite you not to miss this Sunday, April 24, the

Mad Max: Fury Road Platinum Premiere
through the screen of Azteca 7 and remember that we will be reading you with the hashtag #TurboCharged!

What do Gal Gadot and Eminem have to do with Mad Max?