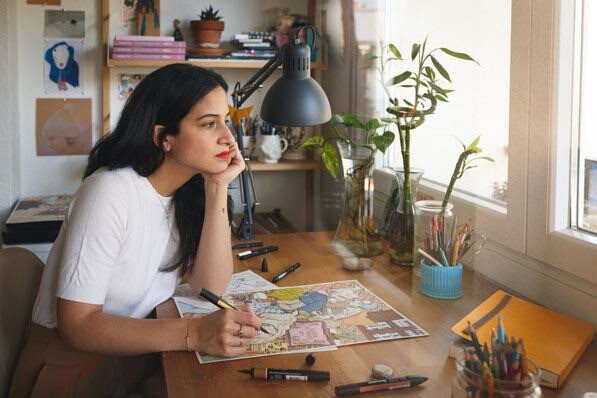 More than five years ago, Fnac stopped dispensing plastic bags, replacing them with paper bags made from recycled and recyclable materials and water-based inks with illustrations. So far, a total of 15 designers have embodied their creativity. And the company, aware of the broad artistic value of its initiative, has compiled in a traveling exhibition this collective work.

The exhibition, called “Illustrated Culture”, will tour several cities until September 15, 2022. It will feature the works of María Hesse, Coco Dávez or Ana Jarén, among other currently recognized illustrators. And it is a full-blown cultural plan to do together or accompanied. On the occasion of its inauguration, we spoke with Ana Jarén. The Sevillian illustrator has long become one of our favorites with her costumbrismo millennial and we wanted to get to know her a little more.

Being able to illustrate one of the FNAC bags was something I really wanted to do, as I knew the designs previously made by illustrators who I admire and I keep a few. Seeing the bag walking down the street has been a stroke of joy with each encounter. Now, being able to show these bags with them in so many cities in Spain is something precious. It is not the first time that my work has been exhibited, but whenever it happens it is something wonderful and more recently, explains the artist.

Its design represents a home situation in which two girls enjoy a pleasant moment giving a second life to some products that have suffered some damage. Something that, in some way, is similar to what Ana Jarén and Fnac have done with bags.

Where does your passion for illustration come from? How were your beginnings? How did you end up dedicating yourself to this?

“The first thing I did was t-shirts with illustrations from iconic fashion designers.”

Since I was little I had always liked painting a lot, but to be honest, it was not something that I considered as my way of life. I studied Advertising and Public Relations and started working in a fashion communication office, which was a very aspirational sector for me. It was there, surrounded by such creative people as designers, stylists… when I began to think that I also wanted to generate something, to be an active part creating things as well. So I started working on my drawings; first doing hand painting a lot and little by little some opportunities to illustrate in the press and private commissions arrived… At first everything was very timid and slow, but with perseverance, the volume of projects grew until it became my profession.

What was your first project? How did you find your own style?
The first thing I tried was some t-shirts with illustrations by iconic fashion designers. They were very simple illustrations, with black lines and touches of red. At first, I was trying to do something with very few colors and quite simple, but I felt that I had to keep moving forward and by spending so much time painting, a style with which I began to feel very comfortable and to feel very mine too.

It helped me a lot at that time to be very receptive to the things around me. Thus, I was finding the themes that I really wanted to illustrate, richer and more mature color palettes and always enjoying the details a lot.

What are your references?

I am inspired and fascinated by the work of Amy Sherald, also Bryan Organ. In the field of illustration I love Nina Cosford for the humor and the naive of her line.

His method of work and inspiration

“I paint with very simple techniques such as marker and pencil on paper.”

How is a day to day in your work? What techniques do you usually use? What steps do your illustrations go through before we can enjoy them?
I am a very methodical person and I like to give illustrations the time and attention they deserve. I usually sit at the work table at 06:00 to maximize the day. I try to take advantage of all the hours that I can doing what I like so much, leaving spaces for my daughter, which is the main thing.

I paint with very simple techniques such as marker and pencil on paper. Although for some projects I resort to other techniques such as acrylics.
My process is quite simple, I imagine that it is very similar to that of many people who paint. I start by collecting ideas and references, I sketch the idea and once I am satisfied, I make the final illustration. I like that as I do the illustration, it asks me for certain things, so I try to make an open sketch to incorporate those elements as I paint. And the same thing happens to me with the issue of colors. I can have a certain idea of ​​which palette I like, but as I go I update what the drawing suggests.

“The issue of women has not really been intentional.”

Your work represents the beauty of everyday life through women and a lot of color, do you draw inspiration from the women around you? On social media? Why only women?

Inspiration comes from everywhere, I am always receptive to what surrounds me, be it cinema, music, a building on the street, a magazine, a museum or a store. It is not something conscious, but surely my way of looking is already used to filtering those things that are interesting to me. The subject of women has not really been something intentional. I usually work in series, developing ideas through many illustrations, letting both the theme, the colors or the style itself evolve as far as necessary. I focused my gaze on women out of affinity and have continued to do things along those lines. Although women play a fundamental role in my work, they are not the only protagonists of my illustrations, there are also men, animals, decoration, which can become very important depending on the work.

The goal of his art and rise to fame

“I like to count incomplete things so that whoever looks at the illustration feels it also his.”

These scenes that you draw, are they intended to make us reflect? What would you like to achieve with them? Do you intend to address social issues? Can we delve into the situations you represent?

That would be the idea. I like to raise contexts and situations that a priori are everyday but the extra elements, the decoration or the look of the character can lead us to something else. It all depends on how much you want to investigate. I love the idea of ​​the viewer ending or making the story I’m telling their own. I like to tell “incomplete” things so that whoever looks at the illustration feels it also theirs and in this way a complicity is generated. They tell me quite often that they are reflected in the drawing, that they have lived that scene and that for me is something tremendously gratifying because I feel that my work in drawing that piece has been fulfilled. That game in which they complete the scene that I represent with their own emotions seems wonderful to me.

“The illustrations that I do of couples and those of moments of enjoyment with oneself are very popular”.

What are the ones that work the most on the networks?

I think they really like the illustrations I make of couples and those of moments of enjoyment with oneself. It’s funny that I feel like both extremes work. Illustrations full of color and elements, the most baroque and also the opposite pole of line drawing in which many times I simply draw very short planes of scenes that I find interesting to be drawn and in which there are fewer elements and no color. .

Eva Chen, Tallulah, the daughter of Bruce Willis and Demi Moore, Reese Witherspoon… You’ve got fans on the other side of the pond, how are you living it? What is the inflection point at which you are really aware that you are starting to go viral?

These people are a good example. It is amazing to see how people who are apparently so far from you and who are so influential stop to see your work.

It has given me a lot of confidence, not so much because of the impact that these people have, but because it shows that we do not have to set limits ourselves, but that we can try to take our work anywhere. Just being able to try it, without it being crazy to think about it, is very motivating.

“What I like most about my job are the details.”

What do you think your job has that hooks you so much? What sets you apart from other illustrators?What they tell me most about my work, and I quite agree, is that it is very entertaining to stop and look at the details. I really enjoy including them in the illustrations. It is part of the story I tell and I am very happy to see that it does not go unnoticed. The other would be the manual touch of my illustrations that gives the imperfect point of manual work and I think it brings warmth to the whole.

Magazines, brands, editorials, exhibitions … you have done everything, where do you feel most comfortable?

The truth is that what I like is painting and I don’t care so much about the medium or the support. I really like when the illustration comes to life in the different physical supports, be it a vase, a mural or a magazine, each one has something special, but the point of being able to touch it is crazy for me.

Although it sounds very politically correct, it is true that all projects offer me something interesting. Completing the story of a magazine article with an illustration is as enriching as illustrating a pattern for a fabric, where you have to understand the ideas of the designer and the peculiarities of the medium, I think that everything adds up and above all, it amuses me. One thing that drives me crazy about dedicating myself to this is that it is not boring at all, I do everything and when it is new, I learn to do it.

Is there a job that you consider especially important in your career or that excites you especially?

There are some that I have a lot of affection for, such as the collection with La Cartuja de Sevilla, my book Amigas, the first mural I made, the FNAC bag, which was aspirational … But to be honest, every email that arrives proposing a project to me It continues to produce a lot of emotion, because I love being able to dedicate myself to what I do

What are you working on now?In these I prepare an expo that will take place in March in Madrid and I am collaborating with magazines and finishing a very cool poster that will soon come to light.

We meet Ana Jarén, the Spanish millennial illustrator who has conquered celebrities like Reese Witherspoon