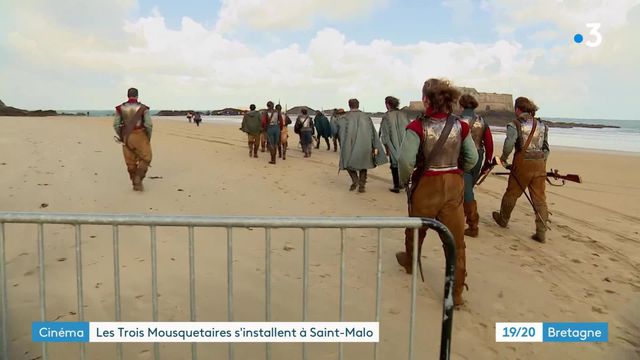 An adaptation to the five-star cast with François Civil in the role of d’Artagnan. Vincent Cassel, Pio Marmaï and Romain Duris encamp the other musketeers. Eva Green plays Milady and the comedian member of the Comédie Française Éric Ruf will be Cardinal Richelieu.

The sea, the ramparts, the Fort National … Saint-Malo is a dream natural setting for a period and adventure film like this new adaptation of Alexandre Dumas’ novel. The curious flock to the filming locations. But the secrets surrounding this super-production are well kept. Forbidden to get too close or to take pictures.

Whatever, the atmosphere is festive on this return to the corsair city. About 150 technicians, about thirty extras, the main actors and the whole team around the director landed at the beginning of September. An ideal spotlight to boost the latter part of the season.

In the city, residents and traders are delighted with this filming. Like chef Julien Lautru who has often feasted on D’Artagnan and his companions in his restaurant: “We saw them almost daily, even if they sometimes changed creameries! But here, they often came because we offer continuous service so they could eat at any time”.

All these people to feed and house, blessed bread for traders. “For the reception of the teams, it is approximately 150 hotel rooms per day. And we estimate an economic impact for all partners of around one million euros, says Sébastien André, general manager of city services. And in the longer term, we hope that some fans of the film will come and see the sets in which it was shot “.

The shootings of the two feature films, one centered on d’Artagnan (François Civil) in and the other on Milady (Eva Green) continue simultaneously until the end of the year.

Pathé and @Dimitri_Rassam reveal the cast of films #LesTroisMousquetairesLesFilms #DArtagnan #Milady
Currently in preparation, these two feature films adapted from the work of Alexandre Dumas by @mattdelap and @alexdepat are made by @MBourboulon. pic.twitter.com/mOPshSui5K