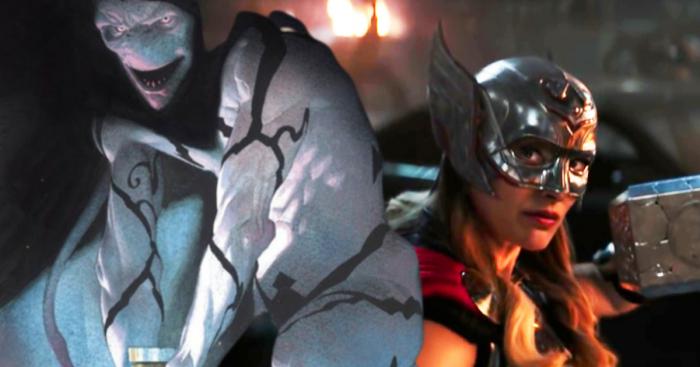 Expected for July 13, 2022, the promotion of Thor: Love and Thunder has greatly accelerated in recent times. After an explosive trailer released a few days ago, Marvel Studios has just shared a brand new visual of Gorr, the great antagonist of the feature film, played by comedian Christian Bale. The opportunity to see more about this destroyer of gods, which is still very discreet lately.

Thor: Love and Thunder – next round of the MCU

After the success of Thor: Ragnarok (more than $853 million in box office receipts), filmmaker Taika Waititi returned behind the camera to set the scene Thor: Love and Thunder. A brand new story that will be a bit special since Thor (Chris Hemsworth) will no longer be the god of thunder. In effect, Jane Foster, still played by Natalie Portman, is back in this fourth installment in the saga Thor. She will become the new goddess of thunder since she will be, as the trailer reveals, in possession of Mjolnir.

Adapted from the Jason Aaron comics, this new story will tell like Odinson, the new Thor, and other powerful heroes will have to join forces to face Gorr. The latter, who will be played by Christian Bale is currently absent from the trailers. But a brand new design for the character has just been shared by Marvel Studios.

A t-shirt from the film has just been shared on the networks. On the garment, the most sophisticated fans will have recognized Gorr through an image that pays homage to Jason Aaron’s comics. Currently, it is probably of the best Christian Bale character illustration shared to date. On this t-shirt, we can see Odinson and Thor facing the terrible Gorr.

Gorr the God Butcher is a supervillain created in 2013 by Jason Aaron. Gorr grew up on an unknown barren and inhospitable planet. Despite the deplorable living conditions in which his people grew up, the gods never intervened. The silence of the gods has swelled a monstrous hatred in Gorr’s heart. One day, he decides to take his destiny into his own hands, leaves his planet and sets himself a sinister goal: kill all the gods of creation. Gorr then embarks on a vengeful mission through which he wants to erase the gods from the surface of the universe. All the gods together. Gorr then becomes a credible and dangerous threat for the Asgardian gods, for the gods of Olympus or even for the Egyptian gods, to name but a few. His most powerful weapon is the Necrosword swordwhich according to Galactus, was carved at the first dawn of the universe in a stone of endless night. This artifact was forged by Knull, the ancestor of the Klyntar (Venom’s species), using the head of a deceased Celestial. This blade allows its user to create spikes capable of slaying any god. Gorr will therefore be a major opponent in the Marvel Cinematic Universe…