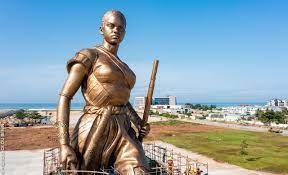 I see all the little chocolate-colored girls like you.
Viola Davis at the Toronto Film Festival

“Viola I see you”exclaims the charismatic heroine of the American series Murder. “I see all the little chocolate-colored girls like you.”

Beyond this feminist message, this film also has another challenge. As first blockbuster never done by an African-American woman, no room for failure. Because for the actress and director, there is no doubt: this work will be judged differently from films with white directors and actors.

“Above all, the film has to make money. And I’m divided on that… If it doesn’t make money, what does that mean? Only black women, women with dark-skinned, can’t top the global box office?”says the American star.

“Afterwards, they will have statistics, saying that Woman King did this, this or that. And that’s what troubles me, believes the actress. Because it is simply wrong. We don’t do that with white films. When one movie fails, you make another, and another.”she adds.

In the wake of Black Panther

The only African American to win a Best Actress Oscar, an Emmy and a Tony Award, Viola Davis spent six years trying to convince reluctant studios and producers to bet on the project. In the end, the $100 million budget film features an African-American director, Gina Prince-Bythewood, and a mostly black and female cast.

And if we are truly equal, then I challenge you to prove it.
Viola Davis

If this movie doesn’t make money, “you won’t see us at allshe regrets. It’s the truth. I wish it were different.”

The “Agojié”, the Amazons of Dahomey

The Woman King retraces the extraordinary story of the Agojié, a unit of warriors who protected the kingdom of Dahomey – located in present-day Benin – in the 19th century in West Africa. Their skill and fury have never been matched. We discover the epic fate of General Nanisca, played by 57-year-old Viola Davis, who trains a new generation of recruits and prepares them for battle against an enemy determined to destroy their way of life.

At the origin of these female elite troops: Queen Tasi, or Nan Hangbe, who reigned following the death of her brother, from 1708 to 1711. She herself took the head of the army, cross-dressing as his late twin brother, Akaba. This queen has since largely been erased from history. The king who will succeed him will keep and develop this body of female guards, then baptized Mino, which means “our mothers”, in the Fon language. In the middle of the 19th century, the mino number between 4,000 and 6,000 and represent approximately one third of the army of Dahomey.

This feminine army had already inspired the fighters of Black Panther, a film that generated $1.3 billion in revenue worldwide. The opus number two, which comes out in theaters in November, should give them a more important place.

Faced with the success of the Amazons abroad, the Beninese government decided to make it the new visual identity of the country. On July 30, 2022, the eve of Independence Day, President Patrice Talon inaugurated in the heart of Cotonou a bronze statue more than 30 meters high representing one of these valiant warriors.

“This statue will be in our eyes, and in those of our visitors, the symbol of the Beninese woman, that of today and that of tomorrow”said the president at the inauguration of this monumental work by Chinese sculptor Li Xiangqun.

In a patriarchal society like that of Benin, it takes a lot of courage and determination to lead the fight for the emancipation of women.
Senami Totin, activist for women’s rights in Benin

The Amazons are “a daily source of inspiration”assures Senami Totin, a 28-year-old women’s rights activist, who is delighted with the new place given to this figure in her country. “In a patriarchal society like that of Benin, it takes a lot of courage and determination to lead the fight for the emancipation of women”she says, citing unpunished rapes, forced marriages, the eviction of women from inheritances, but also the lack of representation of women in decision-making bodies.

Between polemics and misogynistic criticism

The film was well received when it had its world premiere at the Toronto Film Festival. The magazine variety hails a “compelling display of black power” with Viola Davis in her “fierce role”.

A little too ferocious for the taste of a certain public, which did not hesitate to criticize the fight scenes of the film. Reviews that the actress considers misogynistic: “There are even people, among the black population, who say: ‘Ah, it’s a film with dark-skinned women, why are they so masculine? Why aren’t they prettier? Why couldn’t it be a romantic comedy?'”

Another controversy, of historical origin, this time: in the United States, calls for a boycott of the film have been launched. Some question the role of the Amazons defending a kingdom that actively participated in the slave trade.

We women are combative, but we too often allow ourselves to be intimidated and discriminated against. We are sometimes afraid to take the floor or the leading roles when we are capable of great things.
Bahunde, Beninese high school student

In Benin, the film is perceived by others as a new “cultural appropriation” of Hollywood, the feature film having been shot in South Africa and the actors, almost none of whom are Beninese, imitating the accent of Nigerians , the English-speaking neighbours.

Screened in preview in Cotonou, the economic capital of Benin, the film nevertheless received an enthusiastic welcome, at least from the side of the female audience. “My blood froze at one point. For the princess that I am, certain sequences of this film touched me a lot”says Sylvine Sènami Ghezo, a descendant of King Ghézo, sovereign of the kingdom between 1818 and 1858, when leaving the room. The film is a real slap in the face for Bahunde, a 15-year-old girl who came with her parents. “We women are combative, but we too often allow ourselves to be intimidated and discriminated against. We are sometimes afraid to speak or take the lead when we are capable of great things”lets go of the schoolgirl.

The film The Women King in preview in Cotonou, a TV5monde report ►

A reaction that should go straight to the heart of Nanisca, sorry, of Viola Davis, ready to lead the battle to defend her film.

Amy Adams laughed like a five-year-old when she first saw Henry Cavill in his Superman costume
Air Force One: Harrison Ford, the president more dangerous than Liam Neeson
Never try to ridicule Keanu Reeves and his filmography!