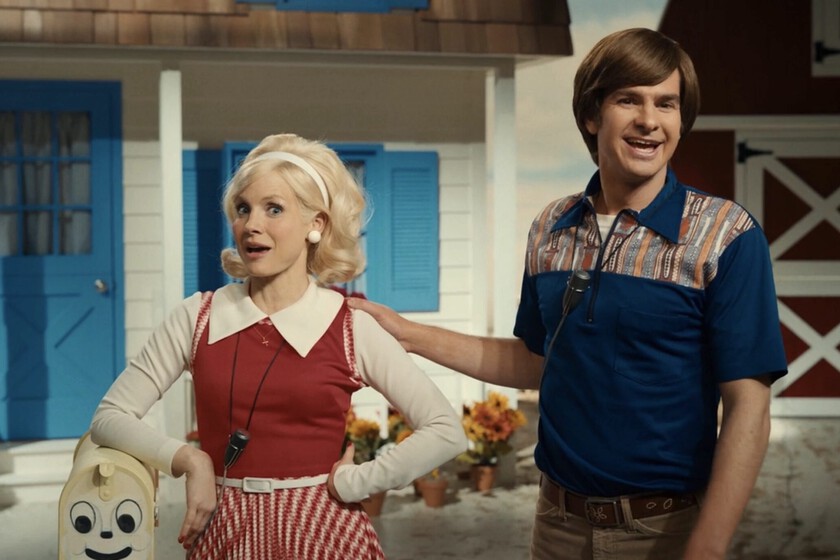 In 1974, a lot of things were changing on american television: series were released that would later mark an era such as ‘Happy days’ while other more well-intentioned classics such as ‘The Brady Bunch’ came to an end. For her part, Lucille Ball ended her 23 years of chained sitcoms with the cancellation of ‘Here’s Lucy’, making clear the trend of the public, at the same time that Richard Nixon was finished one of the biggest scandals in US history proclaiming his resignation live after Watergate.

And in this environment in which on the one hand you could smell the end of purity on a hitherto conservative and low-risk television, on the other, in a small studio in North Carolina the first catholic program was recorded Hosted by Tammy Faye and Tim Bakker. And, for better and for worse, they made history.

‘Tammy Faye’s eyes’ you have a lot to choose from: the story of the fall from grace of The PTL Club and its two presenters, the American televangelists and their passage into the mainstream, an ultra-conservative marriage destroyed by greed, the machismo of the time that unfairly relegated Tammy Faye to the background, commodified by her husband… And somehow, manages to tell it in the least interesting way possible. There is no risk, there is no interest and, in the end, the feeling remains that a documentary would have been much more interesting.


We wouldn’t be talking about ‘Tammy Faye’s Eyes’ now if it weren’t for Jessica Chastain: the actress not only blends in with the character, but it is also capable of showing all the layers that surround it. Her gaze and her smile go from naïve happiness in the opening bars of the film to the bitter sadness of a life full of regret in her twilight. Chastain does not focus on simply replicating the ways and means by Tammy Faye: she escalates her performance and, with it, the film.

It’s easy to underestimate his performance. and comment that if it looks good it is thanks to the merit of the hair and makeup team. And sure enough, it helps make Chastain look better and more real, whereas in different hands she might end up looking like little more than a Joaquin Reyes Celebrities. Two well-deserved Oscars, but… Is it worth watching the movie just for a good performance accompanied by good makeup? What else can ‘The Eyes of Tammy Faye’ offer us?

The truth is that, sadly, this film trusts too much that the curious true story is enough to support its more than two hours of footage by itself, and the script does not even try to get out of the most prototypical biopic. It is curious that at a time when the cinema seems to be trying to evade biographies of real characters in the most classic style, trying to innovate with films like ‘Aline’ or ‘Rocketman’, the script for ‘The Eyes of Tammy Faye’ seems profoundly anachronisticconservative and unfortunately boring.


Not even an Andrew Garfield on a roll after his success last year with ‘Tick, tick… Boom!’ and that movie that you know is capable of raising a foundation work by simply exposing data, as if it were an adaptation of a Wikipedia page. It tells you what happened, but it doesn’t leave enough ground to draw conclusions beyond the data. It is an empty shellthe wrapping of a gift that promises to be incredible but hides nothing inside.

More was expected from Michael Showalter, a director until now always interesting in already iconic works such as ‘The Great Love Sickness’ and even in some minor ones such as ‘The Lovebirds’. This is the second film that he does not script or produce, and anyone would say that either his seriousness has gotten out of hand or he has not had real control over his work. The truth is that ‘The eyes of Tammy Faye’ could have been run by anyone. It’s a sadly flat piece of work that bases its entire existence on Chastain’s performance. And I wish it wasn’t.

‘Tammy Faye’s eyes’ gave a lot of itself, and sadly is left alone in the promise. Jessica Chastain’s performance is spectacular, the zenith of her career, but an entire film cannot stand on the shoulders of a good role. The script is bland and typical, the direction is very uncreative, and in the end sad eyes and a smile as hard as it is bitter cannot sustain two hours of an excessively typical conservative film and biopic, more typical of another era of Hollywood. a pity

‘The eyes of Tammy Faye’: Jessica Chastain’s Oscar-winning performance does not redeem a film already available on Disney +