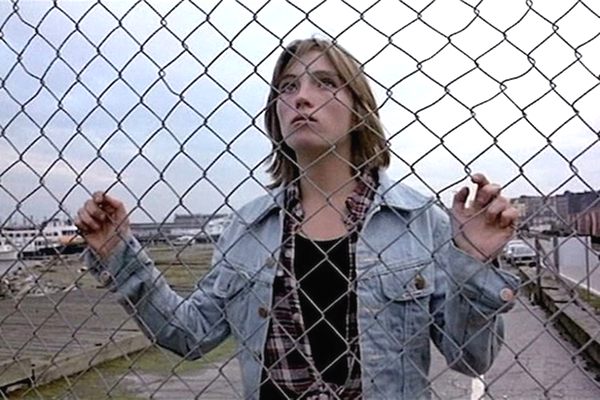 Don, an alcoholic and disillusioned truck driver, crashed into a bus full of children. While serving a prison sentence, Katie, his wife, takes refuge in drugs and the arms of other men, and Cindy, his daughter, escapes and swears by Johnny Rotten, the singer of the Sex Pistols . When he is released, Don tries to give a new start to a shattered family. But the demons of the past reappear …

After the resounding success ofEasy Rider (1969) and the failure of his too radical The Last Movie (1970), Dennis Hopper returned to directing a decade later in 1980 with Out of the Blue, a Canadian film project titled CeBe abandoned by its producers. He rewrites the screenplay in a weekend that conforms to the personality of his actress Linda Manz and his love for punk music, the title being inspired by a song by Neil Young. The original project, narrating the success of a psychoanalyst saving a young girl from the clutches of an incestuous father, once passed into the hands of the filmmaker, will prove to be one of those fundamental works of which Dennis Hopper had the secret. Filmed in a hurry (one month of shooting and hardly more for the editing), Out of the Blue is an unclassifiable and particularly puzzling film. Playing, as he liked to do, with a frenzied editing with ellipses to the key, Dennis Hopper delivers his chaotic and morbid vision of family life according to a singular narrative process that fascinates as much as it disconcerts. The filmmaker juxtaposes excessively violent scenes and moments of relative calm to satiety: the plot, based on sequence shots and a part of improvisation, never ceases to suggest that the various protagonists are on the edge of the precipice in a tragic outburst fed by extreme pessimism. In this whirlwind of violence exacerbating the senses and undermining any aspiration for an inaccessible American Way of Life (materially and psychologically), the various characters, Don (Dennis Hopper), Kathy (Sharon Farell), Charlie (Don Gordon) and more specifically Cebe (Linda Manz) have no chance of escaping their fate. Out of the Blue has no other escape route than tragedy since any intention to reconstitute the family unit remains impossible. It is in this environment with a well-identified context (hippie 70s and legacy ofEasy Rider : cf. bonus) that the young Cebe tries in vain to reconnect with family life when her father leaves prison. Splendidly embodied by Linda Manz, the young girl “tomboy” anchored in punk, is inevitably pushed towards the confrontation because Don belongs to the past (hippie) and does not know how to manage his libido. Passive or driven by a self-destructive impulse, the characters in the film all have a good reason for suffering a failure linked to their past, in short an untenable situation that we can guess in this formally surprising drama that will destabilize more than a spectator unfamiliar with the film. cinema by Dennis Hopper… Image, dialogues, music, every element of Out of the Blue could pass for an attempt of deliberate provocation of the director to torpedo social codes – until the role of the psychoanalyst (Raymond Burr) quickly dispatched – but the film, in its untreated full version, reveals above all an author who excels at making a cinema different and independent of the rules established in a visionary spirit that unfortunately he will not find again later, a bit like his bikers inEasy Rider whose libertarian aspirations have been swallowed up by society. Yes, Out of the Blue is a highly confusing film, but it proves to be truly compelling in delivering the complex and uncompromising picture of the failing American youth and the irreparable loss of their hopes, moving, in a short decade, from hippie idealism to punk radicalism. . 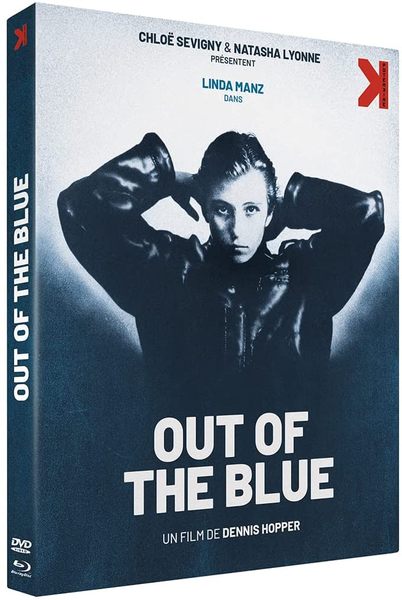 Image : HD copy, new 4K restoration in 2019 thanks to a crowdfunding (see bonus), excellent definition and sharpness in the details, silver grain preserved but discreet and homogeneous (35 mm shooting with Panaflex camera, 4K Master Format), management without flaw in contrast with a good balance of lighting in low light, naturalistic calibration and colorimetry, nuanced realistic tones, clean and stable image

Son : English mix 2.0 monophonic, clear and balanced dialogues, no distortion or breath, excellent dynamics which benefits in particular the soundtrack