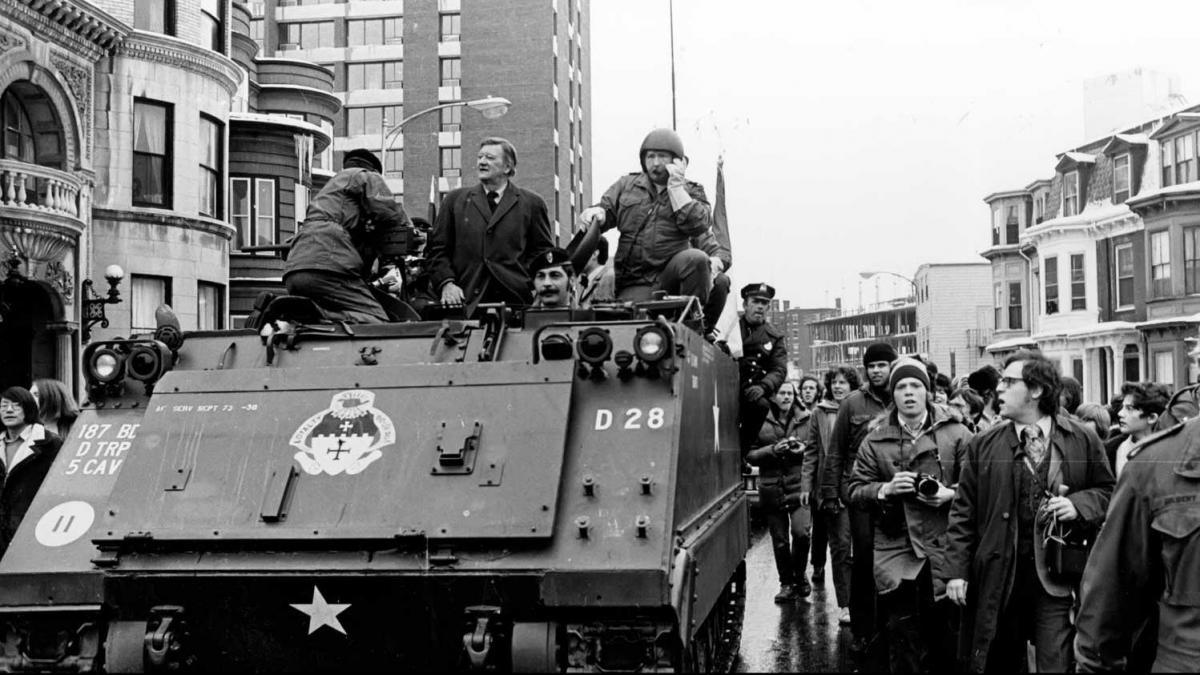 In 1974 John Wayne was one of Hollywood’s great dinosaurs. So far this decade he had starred in six westerns that futilely tried to keep alive the traditional spirit of a genre that films like Wild group (Sam Peckinpah, 1969), Little big man (Arthur Penn, 1970) o Blue soldier (Ralph Nelson, 1970) they were dynamiting from their very heart.

The new liberal airs of Hollywood made Wayne, a militant conservative, even more adamant in his political stances, with inflammatory statements against the civil rights movement, student demonstrations and, in general, anyone who opposed the Vietnam War. .

In fact, he went on to direct and star in a pro-Vietnam film, Green Berets (1968), so naive that it seemed laughable even to the most staunch defenders of US intervention in Southeast Asia.

At 66, John Wayne was the great conservative bulwark of the dream factory – he would be the first actor to receive the Congressional Medal of Honor – but the box office response to his films showed that, while he was still popular, he had completely lost connection with the young audience. For him, Wayne had become a caricature of the frontier hero he had forged himself, someone who was easy to parody.

And if there was one forum where they enjoyed making fun of the old cowboy, it was undoubtedly the writing of The Harvard Lampoon, the satirical magazine that was published on the campus of the famous university. One of their traditions was to “challenge” controversial characters, whom they habitually criticized in their pages, to come to Harvard to “debate” with students; there were very few who accepted that trap. In late 1973, John Wayne received the invitation.

The biggest fraud in history

In 1971, Wayne had turned down the title role of Dirty Harry because of the sexual and violent rawness of the film, but, based on the success of the film, his inner circle recommended that he try his luck with the crime genre. The first of these tapes was the very loose McQ (John Sturges), whose premiere was scheduled for January 1974.

As part of his promotion, the actor received a devastating letter from James Downey, the president of The Harvard Lampoon: “Do you think you are a tough guy? Well, it’s not that hard. He has never thoroughly read critical volumes on Imagist poetry. He has never got his hands dirty with typewriter tape and correction fluid. He has never had to do three theses and a midterm exam in a single course ”.

“The corridors of this institution may not be the corridors of Montezuma and perhaps the ivy does not smell like mugwort,” the writing continued, “but we know a thing or two about guts. […]. We challenge you to come to Harvard and release that new film of yours right in the middle of the most intellectual territory, the most traditionally radical, in short, the most hostile in the world ”.

He finished off the letter by inviting “the quiet man” to demonstrate in this way that he was not “the greatest fraud in history.” And, against all odds, John Wayne accepted the challenge.

John Ford’s fetish actor wrote a response that advanced the unexpected ironic tone of an event destined to surprise: “I regret to observe in your proposal that there is a significant lack of education, although there is a glimmer of hope in the fact that you are aware of it … I will be happy to stop by your campus on my way to London to visit the original university whose name you have assumed, and whose education and manners you have evidently not been able to buy. May the good Lord keep you healthy until I get there. “

Showing off a generous sense of humor and a Comanche arrow-proof self-assurance, the veteran actor moved his contacts to prepare for an entry in style in that university mecca.

On January 15, 1974, Wayne reported to Lampoon’s headquarters on Bow Street in Cambridge after “riding” down Massachusetts Avenue in a Fifth Armored Cavalry tank, followed by another tank and a jeep, all mobilized from Fort Devens, plus a limousine.

Vehicles raced across campus as police and military members tried to keep out the hundreds of onlookers – students, journalists, fans of the actor, and even a group of Indian activists – who gathered along Harvard Square to attend. such a singular spectacle.

“Coming here has been like being invited to dinner by the Borgias,” commented John Wayne at the start of the event.

At the top of that battle tank, with its 1.93 height, 102 kilos, long coat and billowing toupee, the protagonist of Colonel Jackson’s Patrol (1945) and Arenas de Iwo Jima (1949) greeted, pure in mouth, those who cheered, insulted or warned him: “You will not be able to escape, we have you surrounded!”.

A group of the American Indian movement tried to stop the procession by crossing in the middle of the street, but the organizers themselves pushed them aside, thereby drawing a surprising metaphor for the American bourgeois liberal morality of the moment.

Everyone had been surprised that the actor accepted Lampoon’s invitation – whose members were wearing tuxedos and carrying plastic rifles that day – and no one wanted to miss the promising encounter. That caused major altercations at the door of the Harvard auditorium, in which the actor himself was shaken. Once inside, when the students asked if he was alright, the protagonist of The man who killed Liberty Valance (1962) replied with a half smile: “They have not seriously injured me.”

Women, horses and a toupee

“Coming here has been like being invited to dinner by the Borgias,” commented John Wayne at the beginning of the event, referring to the riskiness of the appointment. “And for the record, I agreed to go by declining the invitation to spend a weekend in a Jane Fonda campaign,” he concluded, referring to the popular actress, one of the greatest activists against the Vietnam War.

One thousand six hundred people applauded and laughed at each witty response of the actor in the Harvard Square auditorium, expectant before a question and answer session from which no one was very clear who would be “shot”.

After a hilarious and not very delicate presentation, followed by a brief act of the army unit that had accompanied him appointing him honorary colonel, John Wayne took the floor. He began by thanking the invitation to an event whose previous participant had been Linda Lovelace (protagonist of the iconic pornographic tape Deep Throat), which he referred to as “an actress of unusual talents.” Then “the duel” began:

“Is it true that since you lost weight, your horse’s hernia has improved?” “Well, it is true that my weight was too much for the poor animal. In fact, we ended up canning it and I think that’s what you’ve been eating at The Harvard Club”.

“Why don’t you like working with short guys in your movies?” “It’s hard to get them in the mouth when you spank them”

“What do you think of the women’s liberation movement?” “I think they have the right to work whatever they want … as long as they have dinner ready for when we need it.”

“Has President Nixon ever offered you movie suggestions?” “No, they have all been great successes.”

“Why don’t you like working with short guys in your movies?” “Because it’s hard to get them right in the mouth when you spank them.”

“Do you see yourself as an image of the American spirit?” “Son, at my age I try to see myself as little as possible.”

What does your horse think about sex in the movies? What was the last book you read, if there was a first? Can you do an Ed Sullivan impression? Is it true that you have requested separation from your horse? What do you think about students who smoke LSD? … The questions followed each other with the same fluidity with which Wayne approached them with fresh charges of irony and sarcasm. No one had ever seen a star of his stature laugh that way at himself, offering precisely the stereotype that they used to caricature of him.

There were only a few uncomfortable moments, such as when his connection with the witch hunt of Senator McCarthy and the denunciation of actors linked to the communist movement was addressed, a question to which, twice, the actor said he did not listen well to the question. The master of ceremonies saved the situation in this way: “I think they are asking him if he always wears a girdle or only when he acts with actresses who could be his daughter.”

The quote that some defined as a suicide for the actor ended up being a success for his reputation and for the promotion of his new film. Wayne showed that he could be a radical conservative, but by no means a hostile sidekick. “I think they thought I was an asshole,” I would say, “but when they saw that I was an honest guy talking about me, about what I thought, I think I earned their respect. We spent the whole night together drinking. I guess I was the father they never had ”.

John Wayne died five years later, a victim of a cancer with which he had been battling for years. The western was already immersed in a decline ended in 1980 with the resounding failure of The heaven’s Door (Michael Cimino). In spite of everything, shortly before his death in June 1979, Wayne gave an interview in which he remained implacable in his convictions: “Many Supermen will fly under the sky of America before they can overshadow the cowboy.”