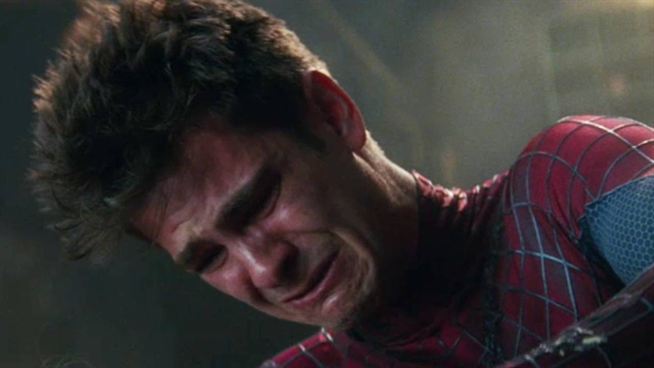 Andrew Garfield was a fan of Peter Parker’s Marvel character, but having played him twice in the movie “The Amazing Spider-Man” left him with a bitter taste.

July 2011, at Comic-Con in San Diego. A stranger arrives in a Spider-Man cosplay and speaks at a panel. He ends his little speech by removing his mask, declaring to the fans in attendance his love for Peter Parker and how the Marvel character has him. “Safe [l]for life”. This man is Andrew Garfield.

At the time of these footage, Andrew Garfield has completed filming for The Amazing Spider-Man, the first installment in the new Spider-Man franchise. His choice as well as that of Marc Webb to the realization are disputed by a part of the fans, who awaited the returns of Tobey Maguire and Sam Raimi.

He therefore comes in a way to justify his love for the license by presenting himself as one of theirs, a fan. But this Spider-Man adventure that Garfield is waiting for a lot will not necessarily end as he wanted and will leave him heartbroken. But how did we come to this?

By his own admission, Andrew Garfield cried while wearing the Spider-Man costume for the first time. Marc Webb, meanwhile, said in a statement:

Although his name is new to many, those who know this young actor understand his extraordinary talent. He combines rare intelligence, humanity and wit. Remember what I’m about to tell you: you’re going to love Andrew Garfield as Spider-Man.

The shooting takes place in good conditions from December 2010 to May 2011. Following the first images shown at Comic-Con in July, from August, a date for an Amazing Spider-Man 2 is announced for May 2, 2014. In July 2012, the first film was a success, with $ 757 million reported for a budget of $ 230 million.

The sequel is under construction and toured from February 4 to June 25, 2013. The production this time is more chaotic because Sony dreams of a Marvel Studios franchise and uses The Amazing Spider-Man 2 to introduce new characters including villains, for two spin-offs, as well as The Amazing Spider-Man 3 and 4, announced in December and June 2013 respectively.

Except that the film is too long and there are too many characters. As a result, a lot of the scenes with Dane DeHaan’s Green Goblin and Felicity Jones’ Felicia / Black Cat are cut, like all of the footage with Mary Jane (Shailene Woodley). Result: the final cut loses consistency.

The abundance of characters imposed by the installation of the future of the franchise and an overly confused plot disappoint audiences. According to estimates by Deadline, the film would have cost 255 million dollars, others speak of 293 million. At the box office, it only brought in 708. Less than the first, for a higher budget. In the United States, the figures are disappointing.

That’s when the mastermind of the franchise, screenwriter Roberto Orci, leaves, and for his part, Andrew Garfield begins to remind the media that his contract only includes a trilogy and not a fourth film, yet already officially announced. In September 2014, he even publicly deplores the cuts made by the studio in The Amazing Spider-Man 2.

It was also around this time that the actor made calls for Sony to have his Spider-Man join the Marvel Studios MCU. Officially, he is told that it will not happen, but behind the scenes, negotiations have started and Sony has already knocked on Marvel’s door, but nothing has come to fruition.

In February 2015, almost a year after the release of The Amazing Spider-Man 2 in April 2014, it was finally announced that the deal between Sony and Marvel to include Spider-Man in the Marvel Cinematic Universe had been concluded and that it would be a reboot with a new actor. Andrew Garfield is brutally removed from the franchise.

Six months after this announcement, the actor returns for Indiewire on its record of the saga and compares it to a prison, saying that it is necessary: “Do everything right, please everyone… It is not possible. In the end, you end up not satisfying anyone or everyone, but just a little bit.”

“These films had to be mainstream, they had to appeal to both white 50-year-olds, gay teens, homophobic bigots from deep in America, but also 11-year-old girls.”

“This aspect is really regrettable. Especially for those of us who, attached to the project, have tried to breathe soul into it, to make it unique, to make it something that deserves a cinema ticket. . “

(…) To be honest, living with so many expectations above your head is like being in jail. There are so many projections and expectations when tackling a story and a character like that.

Even years later, the regrets are still there for the comedian, who saw in Peter Parker the ideal role and a hero he had always been a fan of:

“In the end, what bothered me about this experience was that the story and the character weren’t first on the priority list. I found that very, very problematic. I accepted. to put myself at the service of a story and an incredible character in whose costume I had disguised myself since the age of 3. All of this was compromised and it broke my heart. I had my heart broken, yes, but not entirely.“

Not entirely because since then Garfield has rediscovered his taste for sets by filming for Martin Scorsese, Gia Coppola, Lin-Manuel Miranda or Mel Gibson. Persistent rumors insist that he will reprise his role as Peter Parker in Spider-Man: No Way Home. A rather ironic assumption, given that it is about the franchise which precisely earned him his ouster! But the “spider-loop” would be closed!