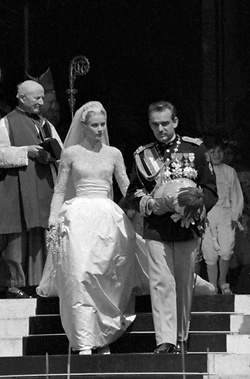 This Saturday the Hollywood star and princess of Monaco would have turned 93 Grace Kelly, one of the most beautiful and elegant women but also an essential actress in the history of cinema, and this despite the fact that she was only active for a few years and only shot a handful of films. She gave up her career, in full honeymoon with the triumph to marry Rainier and be the mother of Alberto, Carolina and Estefania. But her fairytale story, including Prince Charming, was cut short on September 14, 1982, when she was only 52 years old, and she left this world, the victim of a serious traffic accident, when she was traveling in the company of the her little daughter.

His legendary magnetism is evident in his few but unforgettable films, hardly a dozen, but with fundamental titles of the Seventh Art and with his Oscar for The anguish of living (1954), with William Holden, with whom he had a affair.

the woman from Gary Cooper in Alone in the face of danger the wife poisoned with adulterous passion for Clark Gable in Mogambothe attentive girlfriend of James Stewart in rear window, Ray Milland’s victim in Perfect Crime (1954), the most beautiful lady in the universe in catch a thief, with Cary Grant.

That Hitchcock classic was filmed in Monte Carlo and that place changed his life because in the Principality, where he also filmed The Cisne, She met the one who would be the father of her three children, surrendered to the look and irresistible smile of the fashionable actress at that time. She has never stopped being. Even before she became Rainier’s wife, she looked like a princess in everyone’s eyes on the big screen.

All those gifts captivated who was then one of the golden bachelors of the European monarchies; Prince Rainier of Monaco, the small dream state located on the Côte d’Azur. A very rich man.

Their love story was the fairy tale that the world made its own through the society chronicles of the time, and they were happy until the tragic end of the days of the American woman who had turned Monaco into the planetary capital of glamor.

Before she became a princess, Grace had been a “nice” American girl who became a great actress, one of the best, and enjoyed numerous romances, many with fellow protagonists on the screen, and always with men older than her.

Grace Patricia Kelly was born on November 12, 1929 in Philadelphia (United States) into a well-known and wealthy family from the state of Pennsylvania. Her father, John Brendan Kelly, was a successful construction businessman and her mother, Margaret Katherine Majer, a teacher, model, and former athlete of German descent.

Raised Catholic, at fourteen she begins acting in a high school theater group, where Grace decides she wants to make it on stage. She was 18 years old, she at the Academy of Dramatic Arts in New York, where she was accepted for being the niece of George Kelly, a Pulitzer Prize-winning playwright.

To pay for her studies, she began working as a model for items such as cigarettes, cleaning products, and lingerie. She landed her first Broadway role at the age of 20, to good reviews, which opened the doors of theater and television for the next two years.

After having small roles, in 1951 Fred Zinnemann chose her for Alone in the face of danger, released in 1952, with Gary Cooper as a partner in filming. Director of From here to eternity Years later, she told how and why she chose almost a beginner and a perfect stranger to be the companion of an established star like Cooper: “She arrived at the casting dressed with unusual elegance, something very strange for a western, and she seemed like the perfect person “, said.

John Ford saw her in that movie and the following year and chose her for Mogambowith Clark Gable Y Ava Gardner of protagonists. She was nominated for an Oscar and she began to shine as one of the biggest stars.

In 1953, when he was only 24 years old, Alfred Hitchcock the call for Perfect Crime, and Grace gets even more recognition, loving how the director works. A mutual admiration. She becomes his muse and plays rear windowstarring James Stewart, who spoke of Grace like this: “In rear windowAlfred asked Grace to cross the set, climb the building across the street, and sneak into the room of the salesman I’m supposed to be spying on. Grace did so, and when she returned, after a perfect take, she asked Hitchcock what he thought of it. And the director said that she had done it exactly the way he wanted.” That’s why he cast her in more films.

In 1955 he rolls again with Hitchcock catch a thief, with partner Cary Grant on the French Riviera. And it was then that he met Monaco and Prince Rainier for the first time.

Before her life turned upside down, Kelly scooped an Academy Award for Best Actress that same year for The anguish of living, conly 26 years old. By then she had already enjoyed a number of romantic relationships, some with the most attractive co-stars.

Before becoming the Princess of Monaco, Grace Kelly’s sentimental resume begins at the age of 17 when she had an affair with one of her teachers, married and ten years older than her. In 1949 Grace had an affair with Prince Ali Khan, who later married Rita Hayworth.

In 1950 she had relations with Gene Lyons, an actor 10 years older than her. when she acted in Alone in the face of danger had an idyll with Gary Cooper the four weeks that the filming lasted.

The actor had a girlfriend and was 28 years older than Grace. Something similar happened during the filming of Mogambo, where falls madly in love with Clark Gable, but he left her at the end of the film.

Later she had an affair with Ray Milland (her husband in Perfect Crime), 24 years older than the actress and married. Later with another married man, Willian Holden, eleven years older than her, partner of the anguish of living, a film with which the young star won the Oscar, with a 26-year age difference. She is credited with romancing Tony Curtis, Oleg Cassini, the great, or David Niven. In Hollywood they called her behind the scenes, the “marriage buster”.

In 1955, while shooting the movie The Cisne (together with Alec Guiness), directed by Charles Vidor, also in Monaco, Rainier III invited her to see the palace gardens. From that date they began a short courtship relationship, because the Monegasque leader flew by plane to the Kelly family home in Philadelphia to ask for Grace’s hand and set the terms of the engagement a few months later.

As custom in the principality was not to allow their princess to appear on screen alongside other men, Grace gave up her film career. The wedding was held on April 19, 1956 in the Cathedral of Monaco. The bride wore a wedding dress designed by the American Helen Rose. From then on Grace was the perfect princess, mother and wife.

Princess of the best Monaco

Grace managed to put Monaco in the spotlight and thereby increase her investments and wealth. Meanwhile, the young highness enjoyed a happy marriage from which three children were born: Carolina, who was born on January 23, 1957, Albert II, on March 14, 1958, currently Sovereign Prince of Monaco, and Princess Estefania on March 1. February 1965.

All have enjoyed a life of fame, more than being part of the royal Grimaldi dynasty, for being their mother’s sons. Carolina de Monaco, in addition, is the clear heir to the beauty of Grace, as is the case with her daughter, Princess Charlotte, born from her second marriage to Stéfano Casiraghi, who tragically died in a boating accident in 1990. Not so Princess Alexandra , born from Carolina’s marriage to Ernesto Augusto de Hannover, from whom she also separated in 2009, who is more like her father.

The accident that killed her

The princess of Monaco was with her daughter Estefania in the Rover that fell down a 30-meter-high ravine. Only the two occupants of the vehicle would know what really happened for the misfortune to occur. One of them, Grace Kelly, died the following day as a result of fatal injuries.

Grace died without regaining consciousness at the Princess Grace Hospital Center and was buried in the Cathedral of San Nicolás on Saturday, September 18, 1982. She did not know the many other misfortunes and scandals that her daughters and son were involved in. They are not the only orphans of her. The princess left millions of fans and is part of the Olympus of Hollywood legends on her own merits.

The 93 years that Grace Kelly would have turned today: her storybook life and her death at 52

Breaking Bad: The Amazing Scene From The Show That Bryan Cranston Actually Filmed
Jessica Alba once shared how motherhood helped her embrace her sexuality - Noufelle FR
"Everything is still quite Caucasian": Jessica Alba is wary of racial diversity in Marvel