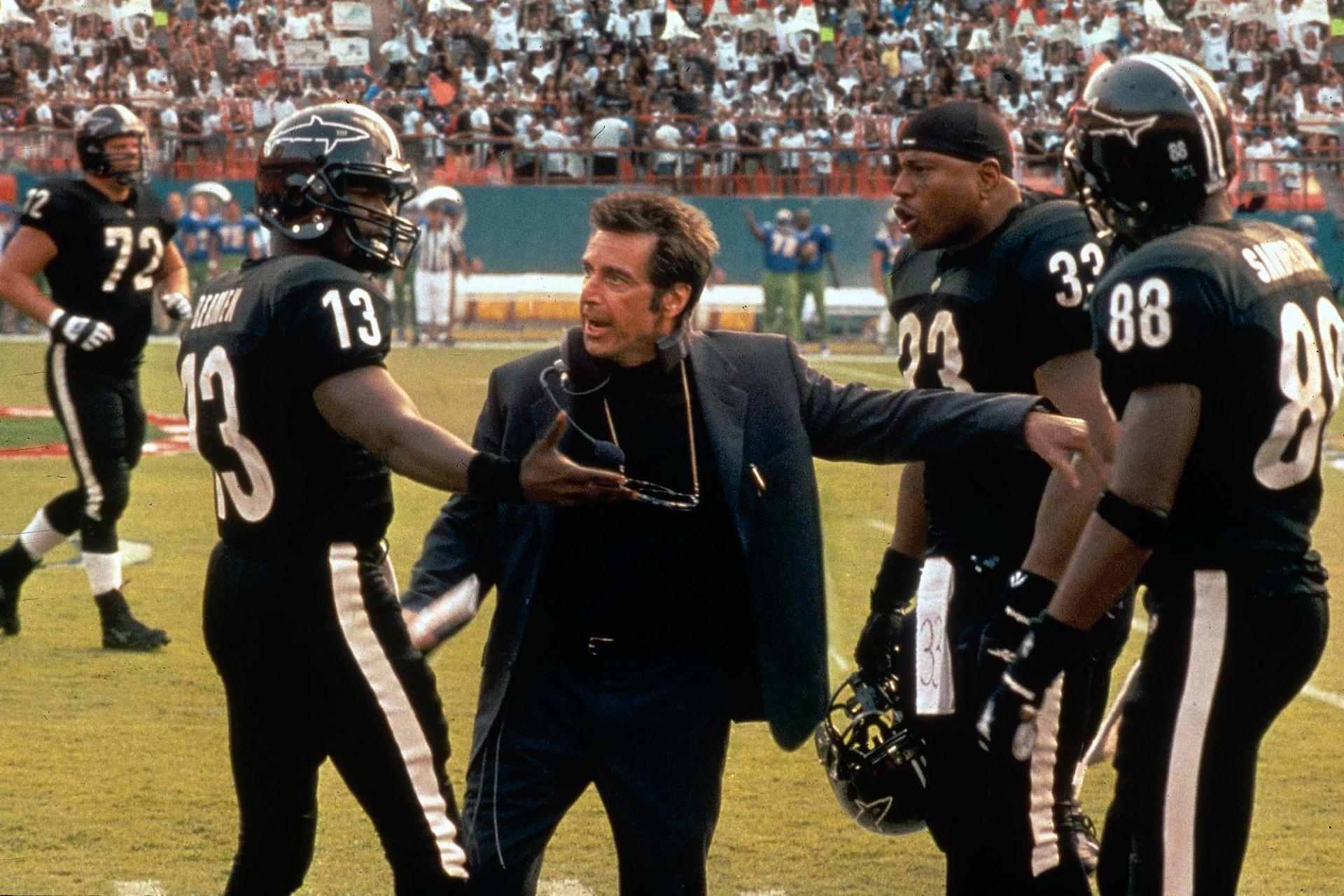 Tony d’Amato is the coach of the Miami Sharks, the drifting American football franchise. Despised by his young management, mocked by journalists for his playbooks seen as obsolete, this yet legendary coach finds his salvation in the person of Willie Beamen, an unknown young quarterback with instinctive and innovative playing systems. Along with the rest of an aging team, they will try to pull the coveted Pantheon Cup from the nose and the beard of the other franchises.

Sunday Hell is subject to two immediate comparisons. The movieOliver Stone presents itself both as a war film, at the same time as a peplum – two genres that the director has crossed or will cross in his career. Sunday hell is a war film, because it praises the hurt, the violence, the sacrifice, the acceleration of the conflict and the respect of a hierarchy increasingly disconnected from a squadron that does not contain only mercenaries. Sunday hell is a peplum, because it compares frontally to Ben-Hur from William Wyler, because it is a representation of the spectacle and of a new mythology that it contains within it, circumscribing the space of sport at the stadium in a hedonistic televisual space out of time. Basically, Sunday hell is a hybridization, sometimes more, transposed at the dawn of the 21st century.

“A NEW BREED OF ATHLETES AND MEN…”

The opening of the season of the NFL, which took place on the night of September 11 to 12, 2021, is an excellent pretext to talk about this long-maligned feature film which has regained the honors over the years. First of all, some clarification is needed. American football in its essence can be defined as a sport of conquest. a down (understand: a game phase is over) allows you to redistribute the cards and vary the strategies to break through the enemy’s lines and continue to advance at all costs. Before even scoring the points, it is to advance 10 yards by 10 yards in the opposing camp in order to reach the in-goal. Immediately, hard not to compare the game to a martial strategy, with the idea of ​​establishing its territory over the minutes in order to guarantee its domination.

Factually, the idea of ​​war already dominates sport. Everything is a minute-by-minute fight, a shock, a key action, a reservoir of statistics – possession, occupation, advances … Oliver Stone will however amplify the phenomenon through a very discursive “montage of attractions”. cut which will make the whole aggressive. The introduction shows it instantly: the credits feature archival footage of footballers with a wide shot of a match in the rain – remarkable in terms of sheer aesthetics but a priori harmless on paper. An elegiac lament is heard in off, as a solemn tribute to these declared heroes. And immediately after, the outburst: a balloon placed on the ground then a series of abstract shapes, colors start to move to oversignify the violence of the ground, the war zone that is taking place in the moment and the passive generals who only see a massacre looming in mondovision.

The American filmmaker, himself a veteran of the Vietnam War, also allows himself some well-felt analogies in his cutaways, where furtive shots shot from a helicopter come to capture the stadium in height as a location which notes the violence present on the territory. Other examples exist and are part of the lexical field of war: there is the transcendence and the deformation of one’s body for an almost mystical purpose, the playful parades of these heroes after victories, a press conference on strategy. economic and sporting to come for the franchise… everything or almost everything relates to something that is more than sport: a constant fight with a troop whose only goal is to verbally, sportingly and physically destroy the opponent.

As we said in the introduction, and even if the war is closely linked to the spectacle, Sunday hell also questions the new arenas. No more gladiatorial fights, room for new mythologies. The new warriors have become emancipated, talk more about their wages than about strategy, roam about to flaunt their fortunes. The effort is no longer rewarded by the collective but by the monetary value which further individualizes the actors. Between the rough defender Luther “Shark” LaVay who puts his life in danger to collect his bounty; and the fantastic Julian Washington who complains about the game of his new quarterback because he sends him fewer balloons and de facto reduces his chances of receiving a higher salary, we realize that the war film and the peplum do more than hybridize: they parasitize each other due to a pecuniary X factor.

It is clear as the feature film progresses that the film becomes devitalized and alienated through new mass media or other neo-liberal logics. It is not uncommon to see the youngest characters in the film being guided solely by what theorist Guy Debord called “psychogeography” – a perception of a portion of territory through the intermediary of mass consumption showcases. The appearances of Willie Beamen on television, the confusion between shooting a rap clip and an advertisement for protein bars, the giant screen in the stadium which shines brilliantly to reveal only a huge advertisement … A reminder evident in the countless commercial cuts of American television during the retransmission of matches, as a means of offering entertainment parallel to sport and occupying the little attention of the spectator that may remain, in a principle of permanent speed. The instinct on and off the field is a simulacrum, almost everything is perverted by the financial reign, no actor really manages to extricate himself from it. One sequence even features Julian Washington facing a young fan who talks to him more about his pay than his exploits in the field.

What remains of the team’s solidarity, of the love of the game, when the money comes to separate them at the end of the season? The commentators become cynical, the spectators fight among themselves in the enclosure of the stadium, a uniform mass comes to life for reasons which escape the logic of sport and of collective transcendence. These different sequences are made explicit through franchise executive Christina Pagniacci (played by Cameron Diaz), who only seeks to make the team a commercially profitable company capable of attracting customers every Sunday. in the Miami-Dade amphitheater. His regular conflicts with the trainer Tony d’Amato (Al Pacino in one of his last great roles), alcoholic and guilty of not having seen the time change, make the salt of this confrontation between past and present in the world of international sport.

Yard by yard, players as companions or leaders will realize their venal and opportunistic behavior, return to the fundamentals that are their families, their common passions, like a return to oneself which finally makes it possible to conquer and triumph. But yard by yard, like a one-way ticket, the team will inevitably fall apart once everyone’s contract is over. As Tony D’Amato says in the film, “We shake hands, and we drink a beer. This is the healthiest thing to do, far from any cacophony.

DISCOVER A CINEMA CLASSIC EVERY SUNDAY IN DAY OF WORSHIP

Film student never left the stroll of Shenmue. Obsessed with screens since the age of 3. Last man on Earth to see with pleasure the advertisements present on VHS.