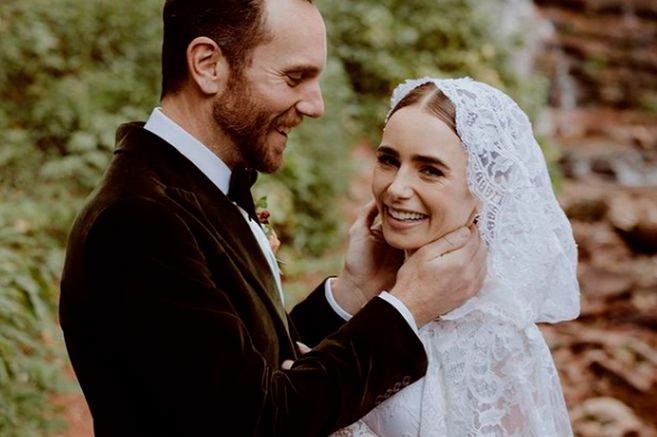 Like a fairy tale, this is how these celebrities have described their weddings so far this 2021.

For this year, the trend in marriages will be natural, outdoors, sustainability and comfort will be present in each of them. They will have fewer protocols and also the celebrations will be more intimate and the toast will be made with people who are closest to them.

This was the weddings of Lily Collins, Andrea Tovar and other celebrities this year:

The actress and the film director sealed their union on September 4 At an intimate ceremony in Colorado, USA, the bride chose a romantic lace mermaid gown with matching cape from Ralph Lauren. The transparent long sleeves and the high neck combined with a simple gathered, embroidered, close to the body and in fall. The protagonist of ‘Emily in Paris’ has dressed as if she were the modern protagonist of a fairy tale.

You can read: Kanye West confesses infidelity to Kim Kardashian on his latest album “Donda”

The ex-queen Andrea Tovar and the soccer player Julián Guillermo Rojas gave the ‘yes I accept’ in two ceremonies, one religious in the city of Chocó and the other symbolic in Armenia; which were carried out a month apart. The former Miss Colombia and the athlete have two children, Elena and Lorenzo.

Tovar shared several videos and images through his Instagram account close to the couple at the ceremony.

So were the marriages of Taliana Vargas, Valerie Domínguez and Andrea Tovar

After five years of courtship and three months of engagement, the singer Gwen Stefani and country singer Blake Shelton got married on July 3, due to the pandemic the couple has bet to unite their lives in a more intimate celebration. Gwen wore two styles during the evening. One of them was a long and white dress and, another, the shorter and more comfortable version than the first one that she wore at the celebration, held in the state of Oklahoma.

Singer Ariana Grande married her boyfriend Dalton Gomez on May 15 in Montecito, California. The singer and her boyfriend, the real estate agent began their relationship in 2019 after she broke up with her ex-boyfriend Pete Davidson. The following year, they announced their engagement and in May of this year they decided to join their lives in their $ 7 million mansion. Ariana Grande wore a simple but very sensual white wedding dress with a bare back from the firm Vera Wang.

This was the moving marriage between Ariana Grande and Dalton Gomez

The Prime Minister of the United Kingdom, Boris Johnson married in a secret and intimate ceremony with his fiancee Carrie Symonds. The ceremony was held at Westminster Cathedral in London on May 29 in front of close friends and family, attended by only thirty guests.

Lady Kitty Spencer, niece of the late Princess of Wales, married billionaire Michael Lewis. The luxurious ceremony was held on July 24 at Villa Aldodrandini, an impressive and luxurious palace located in Rome.

The young model and aristocrat, 30 years old wore no less than five creations from the Italian house Dolce&Gabbana

You can read: Why Lady Di’s Niece’s Marriage Was So Controversial