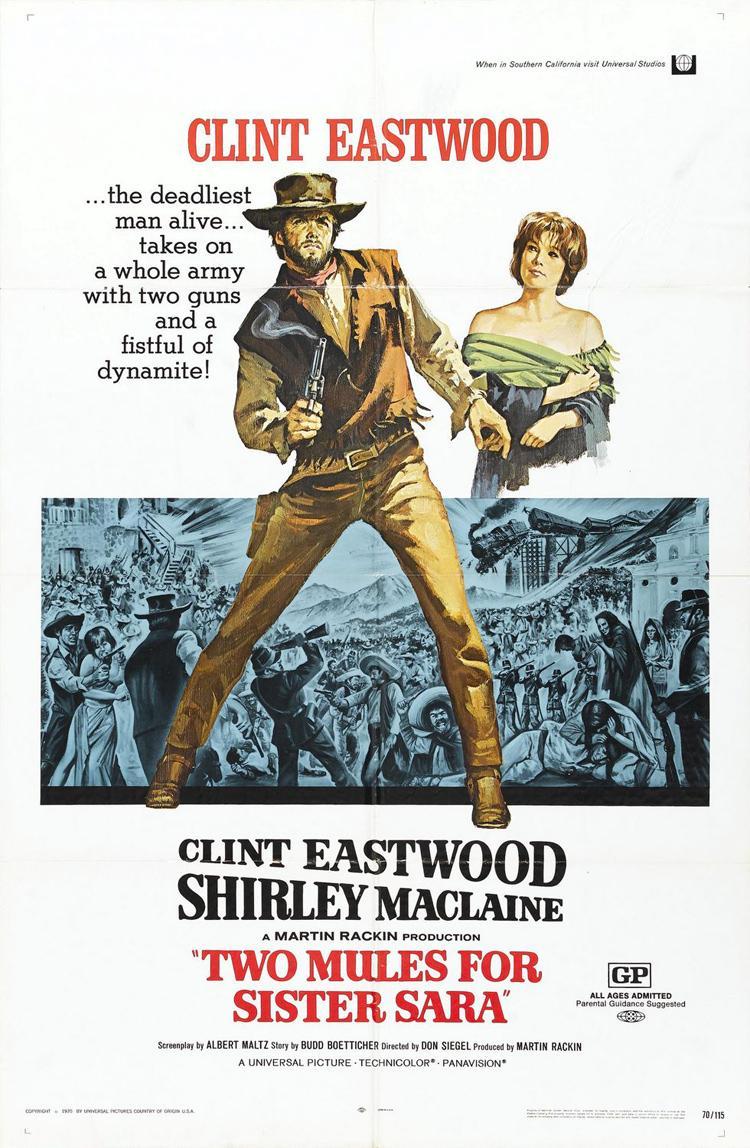 Film directed by Don Siegal and with the participation of Shirley MacLaine, Clint Eastwood and Manolo Fábregas. It is a spaghetti Western, whose plot takes place in Mexico at the time of the French intervention, where there is a meeting between a tough mercenary and a nun, having to undertake a bumpy journey together where it will be clear that they have a lot in common. Again Shirley MacLaine performs well enough for the film to be fun and meet the needs of the genre, providing not only balance, but also lessening the certain dramatic load of spaghetti from Europe in question to its American vision.

American film, debut feature by choreographer and film director Bob Fosse, starring Shirley MacLaine, accompanied by Ricardo Montalbán, Sammy Davis Jr., Chita Rivera, Stubby Kaye, Barbara Bouchet and John McMartin. Musical that allows MacLaine to show not only his acting ability, but also his singing and dancing skills through the story of Charity, a music hall hostess who dreams of living an old-fashioned romance, but who gives him her heart to the wrong man, over and over again. For her performance, the actress received a Golden Globe nomination for best actress in a musical comedy, always with that flirtatious style that made her many times more attractive than her mere physical presence.

A curious fact is that perhaps the greatest influence and trace of his histrionic style is printed on that of his apprentice: Julia Roberts, who would enjoy an important role here thanks in large part to the intercession of MacLaine (and despite the director’s mistreatment of with the young actress). A tender drama which tells the story of six friends in a small community in Louisiana showing us their sadness, love and heartbreak. The veterans, Shirley MacLaine, Olympia Dukakis and Sally Field, offer the dramatic and emotional power of the story, highlighting of course the most advanced in talent, MacLaine, who acts as a kind of “rock” or narrative and/or emotional guide not only for Roberts, but for his entire cast

American film from 1963, directed by the great Billy Wilder, which reunites Shirley MacLaine with Jack Lemmon, who had previously worked on the film “The Apartment”. It is a fun romantic comedy, which deals with the love between a gendarme and a prostitute and all the entanglements that occur around their sentimental relationship, with the city of Paris as a setting. The actress is in one of her best acting roles and an example of this is this wonderful character that she elaborates in an unbeatable way hand in hand with Wilder and with the accompaniment of a wonderful Lemmon. For this work she won a Golden Globe and the Donatello Award for Best Foreign Actress and a BAFTA Award nomination.

In the dramatic category MacLaine she gives the best performance of her life, being the sun of this histrionic constellation and building the entire story precisely from the maternal perception of her character (the first sequence makes that love and obsession very clear in this endearing mother-child story); everyone (as) therefore have to engage with her, setting the tone of the chemistry and the rhythm that channels her unforgettable character. While it is true that this cathartic tragicomedy is one of the cheesiest and, in contrast, less famous Oscar winners, there is no doubt that the mere presence of MacLaine, his mettle and grace in this interpretation, makes it perhaps the mother of all. chick flick

Beautiful filmic exercise that perhaps reveals the highest point of the romantic tragicomedy (and in the background being an accidental Christmas classic). Two unhappy and lonely souls, with personal shadows and lights and ironically intertwined, enshrined Wilder’s cynical and captivating double archetype, forging a gem of powerful influence for comedy and romance. Wilder thus builds a script focused on human aspects: weaknesses, vices, infidelities and secrets, which in the end are overcome by the love connection and the superb acting chemistry between Lemmon and MacLaine, who together with their director procreate a rhythm, moments and endearing dialogues, which see their climax in its mythical and beautiful, very beautiful final scene.