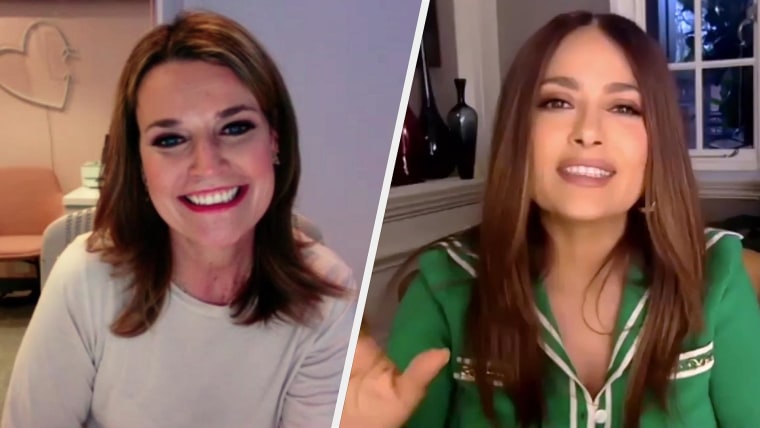 Fans and celebrities came to the TCL Chinese Theater on Friday night, but it wasn’t for the typical movie premiere in the Sacred Halls – instead, crowds gathered outside the sidewalk building to see the actor Salma Hayek receiving the 2,709th star on the Hollywood Walk of Fame.

Los Angeles Mayor Eric Garcetti, Oscar-winning director Chloe Zhao and comedian Adam Sandler all made warm introductions to the “Eternals” actor, celebrating his work on and off camera.

“Selma is a person of incredible talent and compassion,” Zhao said. “She is a woman who is brave enough to walk… in her own way. And never allow anyone to put it in the box.

When Hayek took the stage, she explained that the Friday night ceremony was very “healing” for her. She recounted how she was assaulted two years after leaving her native Mexico for the United States in the early 1990s.

Hayek said his friends visited Los Angeles and asked to see Hollywood. While they were there, Hayek said, she ignored a “poor man who was on the floor and was very messed up” who called out to her.

“And I kept walking and he got offended. (He) got up, took out a knife and started chasing us. Especially after me, trying to stab me, ”she said.

“Nobody helped us,” she added, as they fled and entered a store.

Hayek said they jumped over the store counter and grabbed a “stick” for protection, before being forced to fight the man.

Hayek explained that two nice “gentlemen” from the Hells Angels were able to quickly disarm his attacker. The bikers escorted them back to their car and walked away from the scene.

“Every time I thought of Hollywood Boulevard, that’s what I remember,” Hayek said Friday night. “The truth is when I got home that night I said ‘What am I doing here? Nobody wants me. I mean, I almost got killed today.

She recounted several instances of racism that she experienced at the time in the United States, including someone who kicked her theater seat and told her to “go back to your country”.

“I remember the studio saying to me several times, ‘Why don’t you go back to (Mexican) telenovelas? You will never find a job here. And of course that night I almost got killed, ”Hayek said. “So I said, ‘Nobody wants me here. They want me in my country.

“But I stayed. I stayed. And I mean to everyone here, to all my lovely fans: if you’re wondering what gave me the courage to stay, I’m saying it was you because even though they didn’t know me, here in Hollywood, the studios, all the Latins in America knew who I was. They understood that I came here with dreams like them.

Originally from Coatzacoalcos, Mexico, Hayek made her debut as an actress in Mexican telenovelas. She has acted in movies and TV series, such as “Wild Wild West”, “Grown Ups” and the upcoming “House of Gucci”. Hayek also starred and produced in the critically acclaimed film “Frida,” a biopic on iconic Mexican artist, Frida Kahlo.

Hayek also runs a production company, Ventanarosa, which aims to tell the stories of Latinos, with a specific focus on the lives of women. She also founded the Kering Foundation with her husband, François-Henri Pinault, which leads initiatives to free women around the world from sexual, physical and emotional abuse.

She thanked her fans for following her journey for the past 37 years, adding that she had never taken “a line of encouragement for granted.”

“Find something to love, because the only thing I stayed for was love of cinema,” she said. “If you think you’re not good at it like I did, then do yourself good at it. It doesn’t have to be the movies – be your best at whatever you do. Try to be better. Try to find joy in what you do.